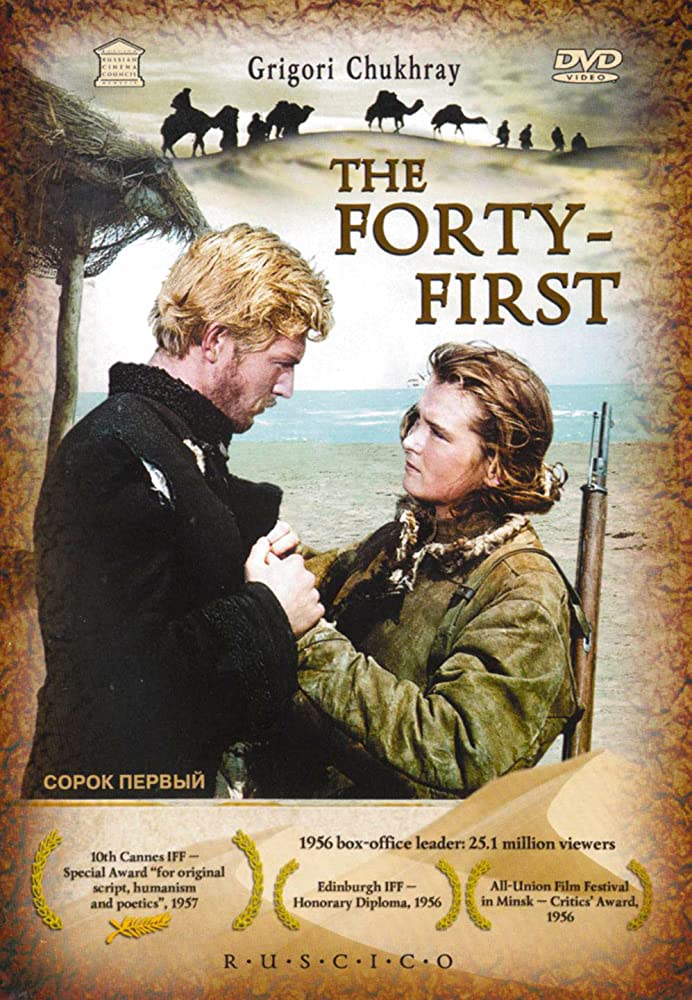 This Soviet era film I came across on YouTube while  searching for Roxie Hart. Quite a drama by the maker of the world cinema classic Ballad of a Soldier.

Let him kiss me with the kisses of his mouth!
For your love is better than wine,
your anointing oils are fragrant,
your name is perfume poured out;
therefore the maidens love you. 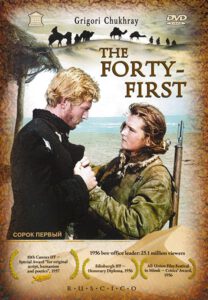 During the bitter Soviet civil war (1917-1922) in which hundreds of thousands of people died, the words of an ancient Hebrew love poem might seem out of place. And yet in Soviet director Grigoriy Chukhray’s 1956 film about female Red Army sniper and a White Army office, they fit perfectly when the two are thrown alone together for an all too brief period. This 64-year-old film is a gem for all those whose heart beat faster when they first read or saw in high school Romero and Juliet. If you are familiar with world cinema, you know that this director went on to helm Ballad of a Soldier in 1959.

The title refers to the kill score of Soldier Maria Filatovna (Izolda Izvitskaya), a crack shot in the squad of soldiers led by Commissar Ansenti Yevsyukov (Nikolay Kryuchkov) somewhere in the desert between the Caspian and the Aral Seas. Caught up in the monumental struggle raging across the former Russian Empire between the Red Army, controlled by Lenin, and the coalition of forces known as the White Army. The squad of twenty-three Red Army soldiers is retreating after a defeat. During one encounter we see Maria carefully aim her rifle at some distant riders. Firing quickly, she announces “Thirty-nine” and “Forty.” The next day Maria spots a small caravan, and during the attack she thinks she has scored her forty-first kill, only to see that her target has ducked behind a mound.

Soon her intended victim is their prisoner, the well-educated Lieutenant Vadim Nikolayevich Govorkha, Jr. (Oleg Strizhenov). When the Commissar learns that their prisoner is carrying information for a White Russian general, his superiors tell him to bring the man to them so they can force the information from him before shooting him. The Commissar orders Maria to be in charge of him during their march across the desert.

That march turns out to be a harrowing one, with most of their water gone. Several fall to the side and die during the next few days. When they reach the shore of the Aral Sea, Maria, Vadim, and two soldiers are dispatched by boat, but before they can sail very far a storm besets them. The ship is wrecked, with just maria and Vadim managing to find refuge on an unknown island. Over the next few days the wall of hostility is breached as they get to know one another personally. Vadim tells Maria the story of Robinson Caruso, calling her his “Girl Friday.” Especially when they embrace sexually, it seems that they will be able to set aside their ideological differences. However, Maria has been indoctrinated so thoroughly that she cannot accept Vadim’s suggestion that they forget the Revolution and escape somewhere to be alone together. The tragic ending when they spot a boat approaching the island is inevitable, not only for the film to stay true to reality, but also to the condition in the Soviet Union under which th director worked. In fact, it is somewhat of a miracle that his making the anti-Revolutionary Vadim so human, indeed so likable rather than villainous survived the scrutiny of the censors. Director Grigoriy Chukhray may have lived and worked in the shadow of Soviet oppression, but as an artist he was free enough to offer a timeless love story that breeched the walls of ideology—well, almost.

This is one of those hidden cinematic treasures on YouTube awaiting your discovery. Now that you cannot get out to the theater is a good time to discover it.

A crack Red Army woman sniper during the Russian Civil War falls in love with the White Army officer placed in her charge with unexpected results.
Editor Rating ★★★★★5 out of 5
More Details