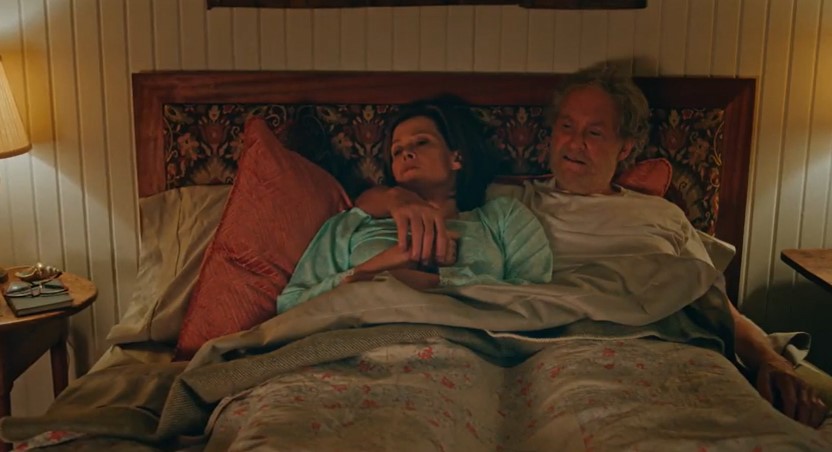 But when he came to his senses he said…

This is that rare Hollywood film centering on the interior life of a grandmother who can still enjoy sex with an old beau but who is unable to be honest about her own neediness. In dealing with alcoholism, it is not as good as The Lost Weekend and Days of Wine Roses, but it deserves to join their company. It is directed by husband and wife Maya Forbes and Wallace Wolodarsky, who collaborated with Thomas Bezucha in adapting Ann Leary’s 2013 novel.

Hildy Good (Sigourney Weaver), once was the most successful realtor in the fictional seashore town of Wendover Massachusetts where her family has resided for almost 300 years. She loves her glasses of merlon after hours, but during the day has stuck to seltzer water. Frequently breaking the fourth wall, she assures us that she never drinks before 5 P.M., and can stop whenever she chooses. Wine is no part of alcoholism, she says, vodka is. And no matter how many glasses she consumes, she is sure she can drive home her leased SUV, the agency of which is trying to get her to make a payment on her lease.

Although frequently aiding her grown daughters financially, she herself is on shaky grounds, having lost most  of her clients 18 months earlier when her family performed an intervention that made her enter a rehab center. She still calls the intervention “an ambush.” During her time away her former assistant Wendy (Kathryn Erbe) stole her contacts and set up her own agency. Now she is Hildy’s chief rival in selling to the wealthy moving out from Boston to enjoy the beautiful setting of the town. Faced with numerous financial needs, she confides, “I need a good year.”

There is a running dialogue between her and an old member of the local AA: she complains about the $4 coffee at the bistro outside of which he sits sipping a cup, and he reminds her several times that if she had attended the group, she would have picked up good tips on who was considering selling their home.

Sigourney Weaver’s delightful performance, which convinces us this at first unlikable woman is worth following, is surrounded by characters brought to life by an excellent ensemble cast. There are daughters Emily and Tess (Molly Brown and Rebecca Henderson), rueful and resentful of how her drinking has harmed their lives; her ex-husband, Scott (David Rasche), left her for a man—and yet toward whom she maintains enough tolerance that she is willing to sit next to him when the entire family gathers for the Holidays. Mamie (Beverly D’Angelo) is her best friend from childhood, though they do not hang out as much any more. Rebecca (Morena Baccarin) is an outsider in town, but becomes a good friend—the two enjoy night-time wine drinking together. Upstairs, holding forth as the town’s therapist is the married Peter (Rob Delaney), who is involved with an affair with Rebecca.

To extricate herself from her financial morass Hildy needs to sell the house that Cassie Dwight (Georgia Lyman) lives in with her autistic son Jake Dwight (Silas Pereira-Olson). It has been on the market for a long time because the boy, subject to violent outbursts, has defaced and damaged the walls, and thus far no one wants a “fixer upper.” Hildy approaches Frank Getchell (Kevin Kline), who has prospered from his contracting and waste management businesses, to hire him to restore the house’s ruined interior. Back in high school he had been her first romance. He at first rebuffs her, but then yields. Before long that romance is rekindled. The two might be senior citizens, but their passions have flagged very little. One daughter is appalled that her mother is making out “with the garbage man.”

As matters progress Hildy drinks more and more wine, and even adds vodka to her drink menu. She also begins to drink before 5 P.M. Several times when she has imbibed beyond a safe level and she insists on driving her van home, we expect disaster. Then at last she wakes up and cannot remember what happened the night before. Frank notices some damage to the front end of her vehicle, so they park it behind her house. He is worried because the autistic boy Jack has disappeared. Could she have…?

All I will say is that she is fortunate to have Frank on her side in what follow, and that the potential tragedy of her situation is the cause which, like the lost son in Jesus’ Parable of the Father and the Prodigal Son, brings her to her senses. A tragedy did indeed occur during the night, but it is a different one from what she and Frank had feared.

The film manages to be funny as well as dramatic, some of Hildy’s wry observations about her neighbors being right on. In one of her many discourses to us her audience she claims to be able to tell everything worth knowing about a person by walking through a person’s house, observing not only the objects she finds but their order, or lack thereof. When she claims that she does not drink alone because “my girls” are with me, we smile because her “girls” are her two cute dogs. Weaver’s reasons for her drinking convey well the rationalization of the self-deluded alcoholic. Her story is not as stark as those of the drinkers in the two classic films mentioned in the first paragraph, but is still compelling. And to see Kevin Kline with her once more is very much a cinematic joy.

A money-strapped alcoholic woman in a New England town rekindles a romance with an old flame & amidst tragedy faces up to her problem.
Editor Rating ★★★★★4.5 out of 5
More Details