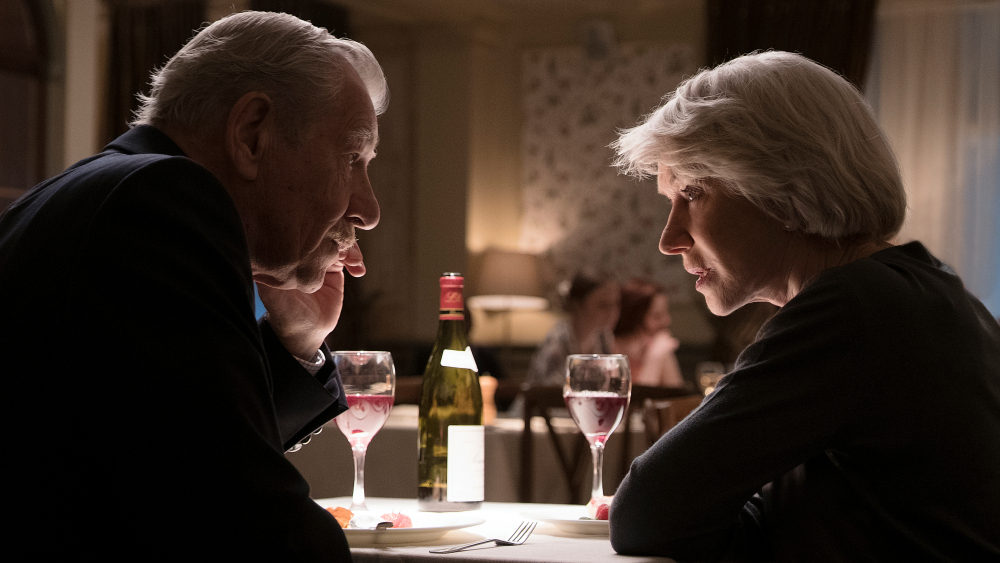 Help, O Lord, for there is no longer anyone who is godly;
the faithful have disappeared from humankind.
They utter lies to each other;
with flattering lips and a double heart they speak.

Director Bill Condon, who directed such dissimilar films as Beauty and the Beast, Mr. Holmes, The Fifth estate, Dream Girls, and Kinsey, this time gives us a scam artist tale that changes into a much more serious genre late in the film. As we get to know scam artist Roy Courtnay Iam McKellen) and Betty McLeish (Helen Mirren), a widow in her 70s, we might think this is another of those tales, like The Music Man or the less predictable Dirty Rotten Socundrels, but it is a bit deeper.

The two meet after exchanging notes via an internet dating service, each revealing they have told little lies about themselves—she had checked the box “nondrinker,” but clearly loves a glass of wine with her meal. She may be a widow in her seventies, but remains svelte and attractive, and he with his pencil mustache would have been eagerly sought by widows were he to settle into a retirement home. Roy is definitely not about to do so, even though in the current scheme he is running with his suave partner Vincent (Jim Carter, best known for portraying the head butler in Downton Abbey) to bilk some Russians out of hundreds of thousands of pounds, he could buy one. The story moves back and forth between this nefarious plot and that of the pair’s scheme to filch money from Betty.

As Roy weasels his way into Betty’s confidence and affections, he brings in Vincent as a supposed financial expert with a plan whereby they could both save a large sum of money by merging their assets. The only bump in the road to the crooks’ road to riches is Betty’s grandson, Steven (Russell Tovey), a young lawyer who’s temporarily living with her, is suspicious of Roy.

Betty withstands Roy’s desire to bed her, but treasures his companionship, so that we expect that eventually he will have his way with her. However, during their vacation in Berlin the plot brings in a back story set during World War II in which we learn that both Betty and Roy were teenagers and were involved in a dark and destructive relationship. Soon we see that the film’s title means more than what we first thought.

The best part of this film is watching two such consummate British ators as Helen Mirren and Iam McKellen interact in what he thinks is his cat and mouse con game, but which turns into something far greater than he could conceive. Even people of faith might set aside the apostle Pauls’s stricture “Vengeance is mine, says the Lord” (Romans12:19) for “Whoever sows injustice will reap calamity.” (Proverbs 22:8a).

An elderly scammer thinks he has an easy mark in a widow until they take a trip together to Berlin where she reveals a traumatic connection between them dating back to WW 2.
Editor Rating ★★★★★4 out of 5
More Details