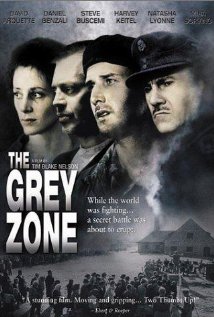 This review from the Dec. 2002 VP (somewhat revised).  It is being posted now because it goes well with a new film dealing with survivors’ guilt, The Survivor. 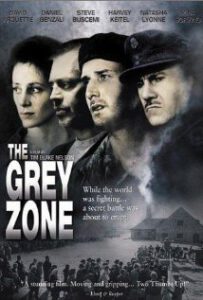 Tim Blake Nelson’s film is a harrowing one to watch because there is no happy outcome to the story. All Holocaust films have to show brutal acts that defy the imagination, but some have some bright spots in which brave non-Jews  risked their lives to aid those being persecuted. Others reveal the cleverness of the inmates, but this one is focused on the Sonderkommandos, the special task forces of Jews who tended to the dirty work of mass murder.

Based onNelson’s play, which in turn is based on the memoir of a Jewish survivor, Dr. Nyiszli (Allan Corduner), this is the story of the terrible compromises men will make in order to cling to a few more months of life—and of the consequences this choice has for the human mind and soul.

Using a hand-held camera much of the time, Nelson draws us into the confines of the cramped concentration camp quarters and the interplay between the benumbed captives.  They are burdened with far more anguish than the bewildered souls standing in the long lines being unloaded from the cattle cars. Unlike the blissfully ignorant new arrivals, they are members of the twelfth, a “Special Squad” (Sonderkommandos), forced to prepare the victims for the gas chambers by lying to them about their fate and thus keeping them calmed down.

Once the victims are dead (mercifully we are not shown their gassing, the camera recording their screams while focused on the waiting Sonderkommandos outside the death chamber), they must drag out the bodies, hose the blood away from the chamber walls (even apply a new coat of white wash at times), transport the bodies to the crematoriums (after extracting any gold fillings from their teeth), stuff the bodies into the blazing furnaces, haul away truck loads of ashes, and sort out and catalogue the mountains of left-behind possessions.

For their dehumanizing work the squads are granted, on the average, four extra months of life before they too are fed into the ovens. Not long, but during that time they are fed and clothed far better than other prisoners. Treated best of all is Dr. Miklos Nyiszli (Allan Corduner), who, for lending his considerable medical skills to assist the infamous Dr. Josef Mengele with his experiments on Jews, is given private quarters and well tailored suits to wear to his laboratory. Of course, he is despised even by the Sonderkommandos, who regard his work as even more degrading than theirs.

At the beginning of the film we are puzzled by the seemingly inhumane act of the prisoners’ smothering of an old man lying ill in his bunk. It is only later, after we witness the degradation and self-loathing of the prisoners, when one of them refers to the smothering, that we can accept this as an act of kindness to a man who had to stuff the bodies of his son, his grandchildren, and other family members into the ovens. Important to some of the prisoners is the distinction between preparing the prisoners for their extermination and the actual killing of them—“We are not murderers! We did not turn the handle or pull the trigger!”) Others are not so self-deluded. In preparing for an armed uprising, one of them tells another that he neither expects nor wants to survive their revolt. He could not live with the knowledge of what they had done to gain a few extra months of survival.

Indeed, the prisoners see their revolt as an attempt to partially justify the compromises they have made. They hope to put the crematoriums out of commission, thereby slowing down the killing process. And then, when they discover in the gas chamber a teenage girl that had miraculously survived the gassing because she had been on the bottom of the heap, several of them refuse to report her. They have been forced into helping to kill thousands; now they have an opportunity to save one life. Even though her discovery by the Nazis will jeopardize their plans for revolt, they are so obsessed with preserving her life, they decide to try to hide her.

Nelson shows us a side of the Holocaust we have not seen before in this close-up of the mechanics of murder. His ensemble cast is superb– David Arquette, Daniel Benzali, Steve Buscemi, Mira Sorvino, David Chandler, Kamelia Grigorva, Natasha Lyonne, and Harvey Keitel (the latter helped produce the film and plays the brutal Nazi officer who shoots a prisoner over the slightest suspicion or provocation, perhaps the most vicious character he will ever play). Many of the scenes, especially the torture and execution of the women prisoners who had managed to smuggle gun powder out of their factory (when discovered they refuse to the end to reveal where it was being taken), are almost too painful to watch—and yet, in order to see the depths to which humans can sink, and to what heights, even for a moment, they can reach, we must watch. There is no sentiment or pandering to our desire to see the Jewish prisoners slaughter the Germans called out to squelch their revolt. Other than the fact such a revolt did happen, the only one at Auschwitz, we are left with little to celebrate. Nor are the prisoners depicted as saints. They are divided into factions, cursing, fighting and mistrusting each other almost as much the Germans. Nelson’s is a slice-of-life film that dares us to look into the abyss of evil and not blink.

Based on a Jewish survivor's memoir of a Nazi death camp memoir, this is the unrelieved dark story of compromises men will make to cling to a few more months of life.
Editor Rating ★★★★★4.5 out of 5
More Details