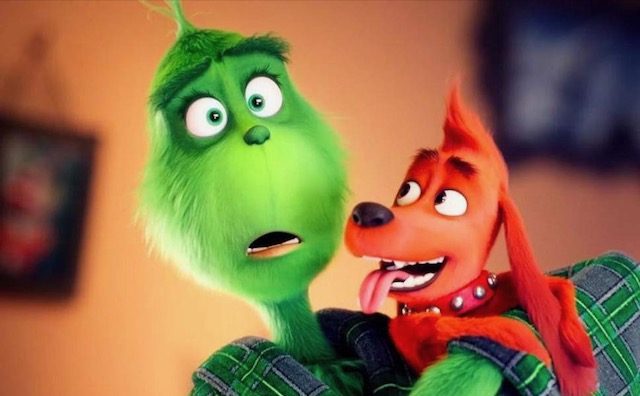 Blessed is the one whose transgressions are forgiven, whose sins are covered.

My fears that this expansion of the original 26-minute of Dr. Seuss’s classic would be as bad as the 2000 bloated version were quickly laid to rest as this zany animated film—some of the crazy physical jokes are worthy of Chuck Jones—unfolded on screen. And you really do need to see on a big screen the gorgeous scenes of Whoville and the mountains to fully appreciate their intricate detail!

As Mr. Grinch (voiced by Benedict Cumberbatch), holed up in his mountain cave alone except for his faithful dog Max, becomes increasingly irritated by the sound of the Whos preparing for Christmas, narrator Pharrell Williams gives us bits and pieces of the miscreant’s back story, which move us beyond Dr. Seuss’s simple explanation for his nastiness—that “his heart was two sizes two small.” Dr. Seuss was an orphan, growing up in an orphanage out of a Dickens novel. Especially at Christmas he feels acutely his loneliness, and thus has come to hate it by focusing on the holiday rather than his abiding loneliness. So miserable is he that he cannot stand to see others enjoy the season. Thus, he devises his plan to spoil the Christmas of those whom he regards as greedily wanting more and more presents. Along with Max, a new character is introduced–Fred, a very large reindeer with a tuft of yellow hair, brought in to help the little dog pull the heavy sleigh into which the Grinch, disguised as Santa Claus will deposit the stolen goods. He’s quite a scene stealer! Like Max, he is loyal to a master whom he does not fully understand.

Still another new character is little Cindy-Lou Who (Cameron Seely) down in Whoville. She has her own scheme she hopes to pull off on Christmas Eve. Her loving, single-parent mom Donna (Rashida Jones) is so overworked, caring for her and the twin infants, that the girl wants to trap the illusive Santa. She hopes to convince him somehow to help Donna. This addition is so well handled that most lovers of the original story will applaud it as a gentle reminder to young viewers that they should appreciate their all too often frazzled parents.

My only regret is the leaving out of the book’s great lines that “maybe Christmas doesn’t come from a store, maybe Christmas, perhaps, means a little bit more.” However, this omission is more than compensated for by the observation following the hilarious theft of Christmas presents and decorated trees that he did not steal Christmas, he just “stole stuff.” (The stealing sequence is a hoot, the stolen goods piled sky-scraper high onto the sleigh, with Fred, Max, and Mr. Grinch struggling to push it up a hill and then keep it under control as the sleigh plunges down the other side.) And there is also the lengthy scene of the Christmas feast—the book ends with just a few lines about Mr. Grinch returning presents and food and getting to carve “the roast beast”—but in the film Mr. Grinch is warmly forgiven by Cindy Lou and finds his loneliness vanishing as he is surrounded by welcoming Whos, including the decoration-addicted Who Bricklebaum (Kenan Thompson).

I still love the simplicity of the TV version (and the voice of Boris Karloff as the Grinch), but am glad that those who decided it needed embellishment did it so well. (Illumination Entertainment also brought us the Despicable/Minion movies.) Writers and directors worked in pairs, Scott Mosier and Yarrow Cheney being the latter, and Michael LeSieur and Tommy Swerdlow creating the script which maintains Dr. Seuss’s rhyme scheme even in the new material. I think they might have a classic on their hands. For people of faith the film is a delightful, laughter-provoking visual parable well illustrating the blessedness celebrated by the author of Psalm 32. Oh yes, I almost forgot, adults will also enjoy the all too brief cameo of Angela Lansbury as The Mayor.

This review will be in the December issue of VP along with a set of questions for reflection and/or discussion. If you have found reviews on this site helpful, please consider purchasing a subscription or individual issue in The Store

Go see this fun update of the Grinch story. Click the headline to read my entire review.
Editor Rating ★★★★★4.5 out of 5