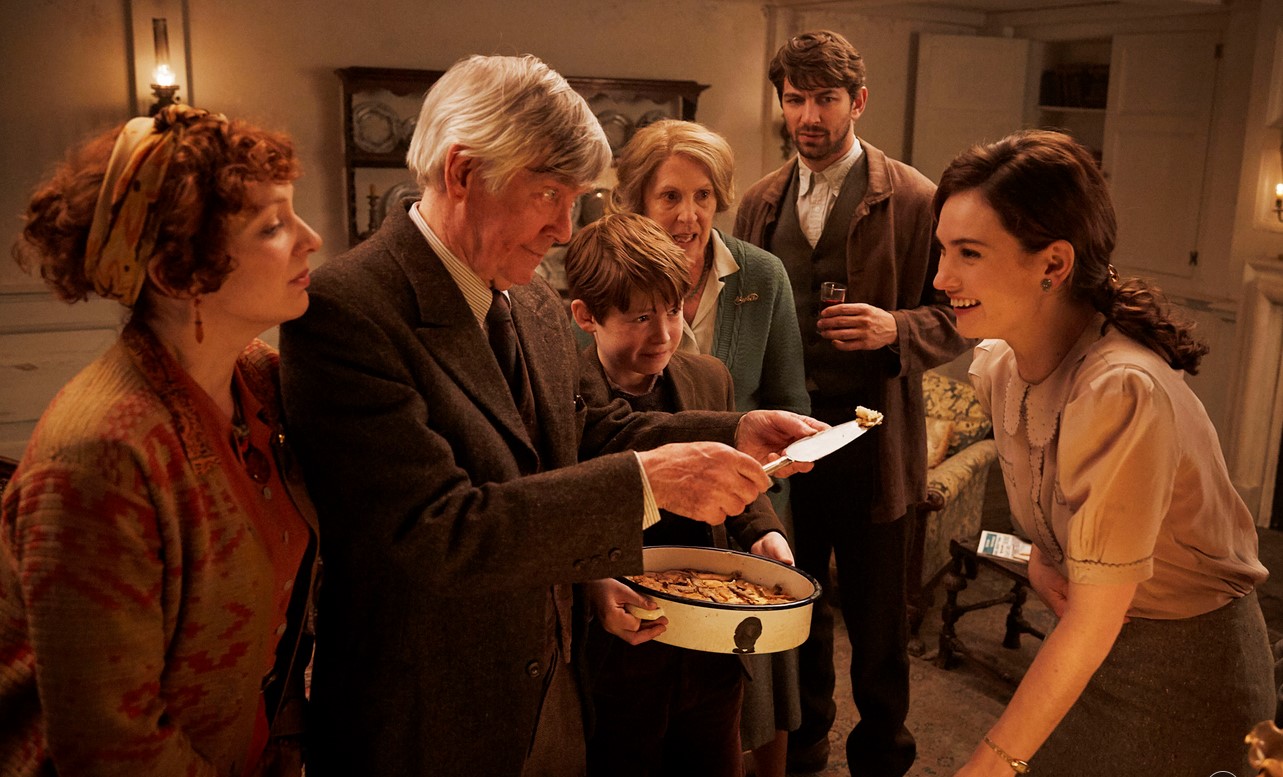 Two are better than one, because they have a good reward for their toil. For if they fall, one will lift up the other; but woe to one who is alone and falls and does not have another to help

As an American I came late to the knowledge that the Nazis, though failing to invade England, did during the War years occupy the island of Guernsey. Until now I also did not know of any film set during this period and locale, so I was delighted to find on Netflix this production directed by one of my favorite English directors, Mike Newell. We learn of the book club with the unwieldly name through a series of flashbacks to those War years.

In the present author Juliet Ashton (Lily James) is a bestselling English writer on a tour hyping her latest book, which she realizes is not up to the level of her previous book. She is encouraged and supported by her London  publisher Sidney (Matthew Goode) and wooed by the handsome Mark (Glen Powell). Then she receives a package from a Guernsey man. It is a copy of a Charles Lamb book she had sold long ago when she needed the money. Inside she had written her name and address. Accompanying it was a short letter by the man, Dawsey Adams (Michiel Huisman), a member of The Guernsey Literary and Potato Peel Pie Society.

Greatly intrigued, Juliet decides to end her tour and visit the island. Maybe she will find there a subject and inspiration for the new book she wants to write. She is not warmly received at first and few are willing to say much to her. Only the boy Eli (Kit Connor) is friendly. He turns out to be the youngest member of the Society and the grandson of another member, Eben Ramsey (Tom Courtenay), the local postmaster. Besides letter writer Dawsey, there is Amelia Maugery (Penelope Wilton), sort of the matriarch for the club and Isola Pribby (Katherine Parkinson), a lonely woman who makes home-makes gin. The club’s founder Elizabeth McKenna (Jessica Brown Findlay) was arrested by the Germans and carried away, leaving her little daughter Kit (Florence Keen) in the care of Dawsey. Nothing has been heard from her since.

We learn in a flashback how the club came into being: the friends had been out cooking and eating the last pig because the Nazis were confiscating all the island’s livestock. On their way back to the village that night they are stopped by German soldiers who demand why they are out after curfew. Quick-witted Elizabeth (Brown Findlay) replies that they have been to a book club meeting, and just as quickly gives its fanciful name. They are allowed to go their way, and thereafter do meet regularly to discuss literature. They have no flour to bake, so Eban devises a recipe based on potato peelings.

Juliet does manage to attend a club meeting and slowly improves her relationship with its reticent members. She becomes so inspired that she writes a book-length account based on what she has been told. She and Dawsey are mutually attracted, though in Jane Austin fashion cannot express it—but we knew at the beginning when old flame Mark showed chauvinistic tendencies he was not the man for her. Juliet’s high expectations for the article are quickly dashed when Amelia declares that they will not give permission for her to write about them, and the others agree.

Juliet quietly lays her manuscript aside—later even giving it to the members as she prepares to return to London. But of course, we know it will not be to marry Mark–the love plot is very predictable, though still enjoyable, as is the camaraderie at the Society where members love to share their favorite books by reading excerpts aloud. This love of books might well be the aspect that viewers will remember the most about the film. Juliet writes Dawsey that she wonders if there is “some secret homing instinct in books that bring them to their perfect readers.” I think most readers who find a book that they read more than once might agree with her.

At the end of the novel author Annie Barrows comments: “The wonderful thing about books – and the thing that made them such a refuge for the islanders during the occupation – is that they take us out of our time and place and understanding, and transport us not just into the world of the story, but into the world of our fellow readers, who have stories of their own.”

They do, indeed, as I can testify to the hours and hours of pleasurable escape books  gave me when I was an only, and thus lonely, child and my parents split up. The Indianapolis Library and the inviting used bookstores along Massachusetts Avenue provided countless treasures that whisked me away on exciting adventures. Good movies also do this, and Mike Newell’s is one of them. Downtown Abbey fans will enjoy seeing several members of that cast in new roles.

A British author in search of inspiration receives a letter from the island of Guernsey & is thrust back to events of the German occupation--& finds both love & a subject for her next book.
Editor Rating ★★★★★4 out of 5
More Details