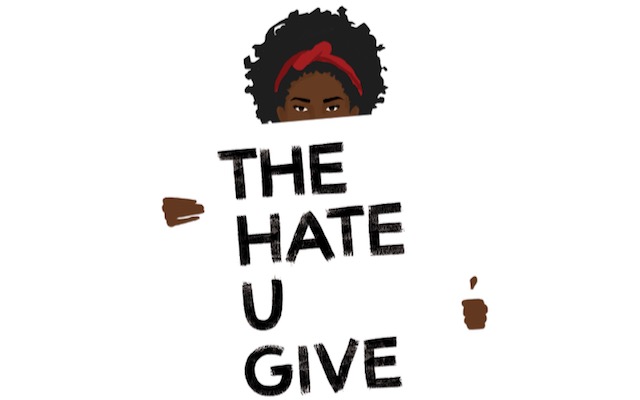 As of now The Hate U Give is the movie I would have every American see if they could afford just one movie this year. Working from Audrey Wells’ script adapted from Angie Thomas’ bestselling 2017 novel, director George Tillman Jr.  has crafted an inspiring film that both gets to the heart of #Black Lives Matter and celebrates the love and strength to be gained from a cohesive family, regardless of race.

As in the novel, 16-year-old Starr Carter (Amandla Stenberg) narrates the story, informing us that there are two Starrs living in two different worlds. There’s “the Williamson Star” who on week days lives for seven hours at the white high school she attends. And then there’s the Starr living in ghettoized Garden Heights with her nurse mother Lisa (Regina Hall), reformed ex-con father Maverick (Russell Hornsby), older (by a year) half-brother Seven (Lamar Johnson), and little brother Sekani (TJ Wright). Seven has a sister Kenya (Dominique Fishback), but she has stayed with her mother in an attempt to protect her from her father King (Anthony Mackie), who is head of the local drug gang. Maverick, once a member, has broken free by keeping quiet when he was arrested and doing the three years jail time that his boss should have done. By striking a deal with King to keep quiet Maverick has been able to buy the grocery store from the sympathetic white man who had employed and taken a shine to him.

Starr was given her name by her father because she and her two brothers were the light in his dark sky. It was their births that motivated him to abandon his more lucrative career of drug dealing. At the beginning of the film we see a younger Starr and Seven, the latter named because seven is a “perfect” number, being given “the talk” concerning the time sure to come when a white policeman will pull them over*. They are always to place their hands on the dashboard, Maverick tells them, make no sudden moves, and always do exactly as the cop says. He also makes them memorize the Ten-Point Program of the Black Panthers and on occasion makes them recite a point. It is not Dr. MLK’s picture displayed on a wall of the Carter resident, but Black Muslim leader Malcolm X, with his insistence on black pride and resistance to white racist oppression.

Starr’s mother has sent her and her half-brother to the posh white prep school because “the local high school is a place you go to get drunk, high, pregnant or killed.” This is part of Lisa’s conflict with husband Maverick, she wanting to move the whole family out of the dangerous neighborhood, whereas he does not want to abandon but to transform it. At Williamson High School Starr is whiter than her classmates. They enjoy their pseudo hood talk and rap-star dress, whereas she eschews any slang that might fit into the stereotypes her friends have of blacks. She has two best friends, Hailey (Sabrina Carpenter) and Maya (Megan Lawless)—even a white boyfriend Chris (KJ Apa), whom she never invites home to meet her parents.

Starr never feels comfortable in either world. At her school she is but one of three or four African Americans, and in Garden Heights she has lost touch with her childhood friends. When her half-sister Kenya talks her into going to a wild party, Starr encounters her childhood best friend, Khalil (Algee Smith). As they renew their acquaintance, a fight and then shots break out. Running outside, she accepts Khalil’s offer to drive her home. In his car he plays a Tupac song, and when she chides him that it’s out of date, he assures her that the dead rapper is very current, his explanation contributing to the film’s title. “Listen,” Khalil says, “The hate U—the letter U—Give Little Infants Fucks Everybody.” He adds, “T-H-U-G L-I-F-E. meaning what society gives us as youth, it bites them in the ass when we wild out. Get it?” (I am quoting from p. 17 of the novel.) She does.

A cop flashes its blue lights behind them, and Khalil pulls over. Starr recalls her father’s “the talk,” hoping her friend will offer no resistance, but he questions why he was pulled over, and is told to exit the car and stand with his hand visible while the cop runs a check on his license. Starr is apprehensive when Khalil moves to see how she is, and when he reaches for his black comb, the cop, without any warning shoots the young man. She is horrified as Khalil dies in her arms.

A storm erupts in the black community, a repetition of so many that have broken out all over the nation following the killing of a black man. The officer’s story is that that he thought Khalil was going for a gun. Starr is a minor, so her name is not given out in the press releases. No one at her school or neighborhood knows she is the sole witness to the shooting. In regard to her testimony before the cops and possibly a grand jury, she is torn between her mother’s desire for her safety and her father’s rage that the shooting be declared what it is, a murder of a black by a white cop. Equipped by her father’s talk years before, Starr had observed the details of the stop, memorizing the officer’s badge number so that she refers to him as Officer One-Fifteen.

Also caught up in the conflict is Starr’s Uncle Carlos (Common), a black cop who helps her widen her perspective, to take in the pressure that any cop is under when he makes a traffic stop at night. He is with Starr and her mother when the girl is interrogated at police headquarters and feels the pressure to go along from his fellow white cops. Though not a friend, he knows the officer, and tells his niece that “It’s complicated. She disagrees.

At school Starr is often dismayed by comments made by her white friends, especially on the day that they decide to walk out of school in protest to the shooting–not because of the injustice but merely as an excuse to escape their classes and tests. As she struggles with her decision of whether to become involved, she meets April Ofrah (Issa Rae), a black activist working to expose the racism of the police department. Although her mother will at first see April as a threat, the activist’s compassion and concern for her daughter as a person, and not just as a prop for her cause, will have a profound influence on the teenager.

The film is filled with interchanges, some funny because of the cluelessness of the whites, and others enraging, especially when, after her identity is made public, Starr has to deal with a police investigator’s focusing upon Khalil’s drug dealing rather than the cop who killed him. She correctly perceives that by tearing down Khalil’s reputation they can deflect attention from the killing—as this is confirmed by the way a journalist interviews her and by the eventual failure of the grand jury to indict the cop—indeed for much of the public the cop is made out to be the victim!

This is one of the most marvelous coming of age stories I have seen, with Starr gaining great insight as the days go by. The conversation she has with her father about why Khalil was driven to sell drugs leads her to a deeper understanding of society’s systematic racism ensnaring so many young blacks in its tentacles. Though she breaks with one of her Williamson girl friends, too obtuse to perceive her white privilege, she maintains her relationship with Chris, despite her father’s displeasure when he learns about it. However, she has to set Chris in his place when he, like so many naïve liberals, says that he does not “see color” when relating to people. She reacts against this statement because her dad has instilled in her so much of Huey Newton’s black pride, telling her boyfriend that if he does not see the black in her, “You don’t see me!” Chris must learn that our color is important in the make-up of our identity and our perceived place in society. This is an interchange I could not find in the novel, so kudus to scriptwriter Audrey Wells for injecting this (and who, sadly died on Oct. 4 this year).

The cast rises to the high level of the script, each contributing conviction and passion to their roles. Amandla Stenberg heads the list, making us expect great things from her. This marks the 13th film for director George Tilman, Jr. His film The Inevitable Defeat of Mister & Pete  was one of my favorite films for 2013. The crowd-pleasing way that his new film wraps up the complicated, conflicted matters  at the end flies in the face of the reality of most white cop-kills-black-man incidents, so we must see this as a harbinger of better times. Starr certainly stands as a symbol of the emergence of youth as advocates for justice, as seen in the real life of the Parkland students calling out the cowardice of adults caving in to the commands of gun fanatics. This is the kind of leadership I saw over 50 years ago in Mississippi when black teenagers stepped forward to demonstrate against racial injustice. (The wonderful Freedom Song and For Us the Living: The Medgar Evans Story are good examples of this.) Thus, the film tells the story of a teenager who joins with the ancient prophet in declaring, “But let justice roll on like a river, righteousness like a never-failing stream!” As the last line in the film reminds us, Starr is indeed a light in the darkness.

*For an informative video based on a NY Times OpEd “A Conversation With My Black Son” click on https://www.youtube.com/watch?v=lXgfX1y60Gw&feature=youtu.be.

This is the story of a black girl surrounded by the hate of racism, torn between her mother's desire for safety & her father's rage when she must decide about testifying to the guilt of the white cop who shot & killd her childhood friend.
Editor Rating ★★★★★5 out of 5
More Details