Skip to content
(“Jagten” in Danish & English)
Rated R. Our ratings: V-5 ; L-5 ; S-5/N-1 . Running time: 1 hour 33 min.
My friends and companions stand aloof from my affliction,
and my neighbors stand far off.
Psalm 38.11
He was despised and rejected by others;
a man of suffering and acquainted with infirmity;
and as one from whom others hide their faces–
he was despised, and we held him of no account.
Isaiah 53:3
So also the tongue is a small member, yet it boasts of great exploits.
How great a forest is set ablaze by a small fire! 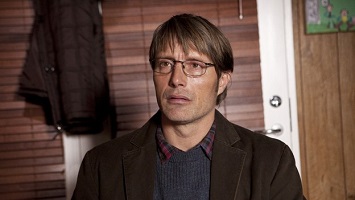 Lucas is a gentle kindgarten who is plunged into a nightmare
world when a little girl accuses him of exposing his privates to her.
(c) 2012 Magnolia Pictures

Directed by Thomas Vinterberg, who also wrote the screenplay with Tobias Lindholm, this film, set in a small Danish town, unfolds between the months leading up to Christmas, ending sometime in the following year at the beginning of hunting season. There is a crucial church scene on Christmas Eve that is a masterful combination of the Nativity and crucifixion, making this a marvelous film for people of faith to discuss.

Lucas (Mads Mikkelsen) is a middle-aged schoolteacher frequently battling over his cell phone with his divorced wife about the custody of their teenaged son Marcus (Lasse Fogelstrom). Unhappy with his mother, the boy badly wants to live with Lucas. Although the messy divorce cost him his teaching position, Lucas has been able to find work at the local kindergarten where the children adore him. When he arrives they enjoy hiding and then attacking him en mass, clinging to his legs and arms, and piling atop him when he falls to the ground and plays ”dead.” One of the assistant teachers also adores him, the Polish immigrant Nadja (Alexandra Rapaport), the two soon entering an affair initiated by her.

Lucas has a circle of hunting buddies with whom he enjoys drinking, though he is the one who stays sober enough to take the inebriated home. His best friend Theo (Thomas Bo Larsen) is one of these, the man’s wife Agnes (Anne Louise Hassing), gratefully appreciating this. In another scene Lucas rescues a friend from drowning when the man develops a cramp while swimming in a cold pond (it is November). Thus it is no wonder that Lucas is popular with adults as well as children.

Little Klara (Annika Wedderkopp), a kindergarten pupil and daughter of Theo and Agnes, develops a crush on Lucas, often showing up at his house so he can walk her home. During one of the pile-ups at kindergarten, he rebuffs her when she kisses him on the lips. Miffed by this, she repeats to head teacher Grethe (Susse Wold) some pornographic penis talk she has overheard on her older brother’s iPad.  She lies that Lucas exposed himself before her. Shocked at what she hears, Grethe, without informing him of all the details, including the child’s name, orders Lucas to take a leave while she brings up the matter with the other staff, with Theo and Agnes, and then that night, at a scheduled meeting with the all the parents.

Thus, as James observed, the little tongue, or we should say the tongue of a little one, starts a fire that blazes out of control, ruining the reputation of a good and kind man. Only Nadja and Brunn (Lars Ranthe), the godfather of his son Marcus, stand by him—and of course, Marcus also, although his alarmed mother tries to break off the boy’s contact with his father. Also, little Klara, becoming aware that what she now calls “a stupid” remark has caused Lucas much pain, tries to see him, showing up at his door to ask if she can walk his faithful dog. He sends her back home, all too aware that her parents would be very upset at any further contact between them.

Klara recants her story, but Grethe and the others believing in the innate goodness of children will not accept this. Lucas is banned from the kindergarten and also from the local supermarket (even Marcus is ordered not to come back when he shops for his father—the boy refusing to stay away from his dad). The staff at the supermarket beats up Lucas when he keeps coming back demanding to buy groceries; someone hurls a rock through Lucas’s window, injuring him; and worst of all, his constant companion, his gentle dog loved by all the children is killed. The police do arrest and interrogate Lucas, but they have to release him. You will enjoy the reason because it is part of the group hysteria that seems to envelop most of the characters.

Although set in a modern Danish town, the story reminds me of the Massachusetts town of Salem in the 17th century. The Salem girls who initiate the mass hysteria are older than Klara and the effects of their delusions and lies about their neighbors being witches are far more deadly. At least the Danish authorities do not convict and hang Lucas, but the persecution he suffers is severe by 20th century standards. A likeable guy respected by all becomes in the eyes of almost everyone the ultimate outsider of the 21st century, a child molester. Lucas becomes so stressed out that he drives away Nadja when she tries to stand by him, and he even tells Bruun to leave him alone.

Matters come to an explosive head on Christmas Eve, just as much a cultural event centering on children in Denmark as it is on this side of the Atlantic. Most of the congregation has gathered for the service when Lucas shambles in, finding the only pew with room for him almost at the front of the sanctuary. The woman sitting there gets up and moves to another pew. All disapproving eyes are focused on the outcast, including Agnes and Theo. The pastor offers a warm welcome, and this time we gather that the “welcome to all” is not ceremonial—-after all, this is a small city and the pastor must know something of what has transpired. The kindergarten children have been formed into a choir, and as they file in we see the radiant little Klara. She spots Lucas and is obviously pleased.

As the children lead the people in a carol about the birth of the Child, the crucifixion of a good man stands in juxtaposition. Theo, fixing his gaze upon his erstwhile friend, remarks to Agnes, “I can see it in his face,” indicating that he now is aware of the innocence of the friend he has abandoned—at that moment I thought of the disciples at Gethsemane who during Jesus’ prayer could not stay awake to watch with him, and then ran away when their master was arrested. The anguished Lucas breaks down. Rising from his pew, he walks back toward Theo, and—.

I don’t know how much director Thomas Vinterberg knows of the church fathers who never sentimentalized Christmas, treating it as we do as a Hallmark moment to glorify children. They never separated the Nativity from Good Friday, often asking in their sermons and their writings, “Why did God become man in order to die?” Medieval artists also sometimes combined themes of Nativity and Crucifixion in their paintings. An artist in Cincinnati a few years ago did this in a mural that he created on the wall of the fellowship hall of his church, as you can see below. 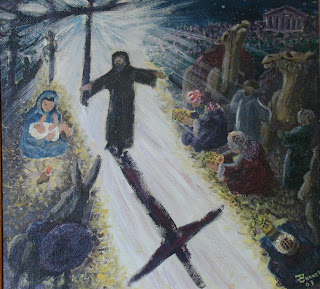 There is in this film not only the Nativity and the crucifixion (of Lucas); there is also a type of resurrection. I will leave this for you to see, though this is perhaps not as convincing as the depiction of crucifixion, with Lucas obviously welcomed back into his circle of friends. I am not suggesting that Lucas is a complete Christ figure, as in such movies as Cool Hand Luke or Babette’s Feast, because Lucas does not seek crucifixion, it is imposed on him. In the four gospels Jesus is not just the victim, but also the victor who, apparently inspired by the Suffering Servant poem in Isaiah 52 & 53, voluntarily lays down his life. By no stretch of the imagination does Lucas, who is struggling just to get by with his life, seek out the opprobrium he suffers. His suffering is for himself, but it is still a type of crucifixion.

The film’s title comes from the next to the last scene depicting a ritual in which Marcus is now initiated into his father and Bruun’s group of male hunters, a sign of his “becoming a man.” The film ends on a jarring note, which calls into question what seems to be a movie “happy ending.” Maybe “all that ends well is well” doesn’t apply after all here.

The full review that includes 12 discussion questions will be included in the Sept/Oct issue of Visual Parables, available on September 9.