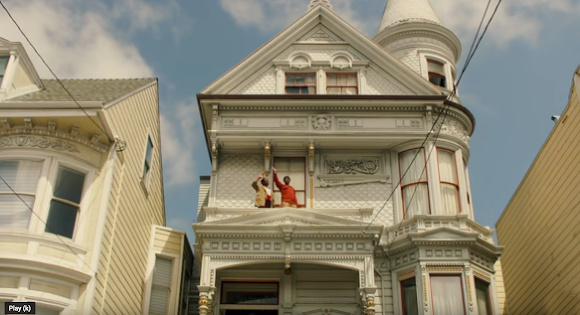 And Jesus said to him, “Foxes have holes, and birds of the air have nests; but the Son of Man has nowhere to lay his head.

Joe Talbot’s first feature film is about a San Francisco black man who once had a place “to lay his head,” but whose father lost the family home due to economics. His family had lived in a lovely Victorian home in the Fillmore district ever since his grandfather’s day. According to family lore, the old man had built the house with its distinctive witch’s hat right after World War Two. Then, with the rise of the white entrepreneurial class associated with computers during the 90s, gentrification had set in. The black families had not risen economically, so Jimmy Fails (played by himself, the story loosely based on his experience) now bunks with his best friend Montgomery (Jonathan Majors), an artist and playwright, who in turn boards with his elderly grandfather (Danny Glover) in Hunter’s Point.

Jimmy, though an adult, still uses his skateboard as his mode of transportation, he and his buddy gliding through the colorful neighborhoods of the city. Mont always has his red notebook tucked into his waistband so he can make notes for possible plays and sketch the people who interest him.

At the film’s beginning he two had been watching a street preacher standing on a milk crate raving that the city needs to be reclaimed. As the two friends skateboard away, we still hear the preacher’s voice declaring, “This is our home! This is our home!” thus setting us up for what is to come.

Jimmy’s destination is the painted lady that once was his home. He is obsessed by it, often touching up the peeling paint of the trim or pulling the weeds. The current white owners do not keep it up well, and when they catch him, the irate wife orders him to leave the house alone. Then comes the day when the couple have to move out due to a family inheritance dispute involving the house, and Jimmy decides to move back in. He and Mont move in some of his family’s furniture that his aunt has stored in her attic. Though uneasy about this, his friend goes along with the scheme.

Jimmy does visit the office of the slick realtor (white, of course) in charge of the house. He learns that it will be tied up in legal maneuverings for a long time, and that its price will be far beyond his means—some $4 million. Jimmy brings the interior of the house back to the glory he remembers before his father lost it in the 90s. One day when a group of tourists riding Segways stop in front of the house and the leader points to the house as a good example of the district’s 150 year-old architecture, Jimmy counters that this house goes back just to 1946 when his grandfather built it. The flustered guide leads the gawkers on to the next stop on his itinerary.

Of course, reality will come crowding in on Jimmy, but this film is so original and quirky that we can’t guess how. There are other characters—Jimmy’s father, and even his long-gone mother whom he briefly encounters. And there is a street gang that hangs out, more menacing than they actually are, and a random act of violence that decreases their number. The beautifully crafted script helps us see in their mourning for their dead friend that they too have feelings and dreams. As the story grows more complex and darker, we wonder what will happen to Jimmy and his impossible dream of regaining his childhood home.

The answer to Jimmy’s dilemma comes from his friend Mont. Hitherto his riding as a passenger on Jimmy’s skateboard, his red notebook tucked into his waistband, is a good symbol of his passive role or relationship. In the last half of the film Mont steps forward to push his dreamy friend into the real world. He visits the realtor to see if there is any way they can arrange to buy the house. Instead, he learns a secret about it unknown even to Jimmy. He then passes around the neighborhood a flyer on which we can see the title of the film. It is also that of his new one-man play, first in his notebook, and then presented in the attic of the house to a mixed audience of family, friends, and neighbors. At a certain point the secret is revealed, stabbing at the heart of Jimmy, but the truth must be brought out and accepted, so Mont insists on declaring it.

With Jimmy’s longing for his home, the two might remind you of the pair of drifters in John Steinbeck’s Of Mice and Men who yearned for a farm to call their own. Happily, this new tale ends on a less plaintive, though still painful note. That Jimmy will survive his hurt we see at the end when he is riding the bus and he overhears the conversation of two young white women complaining about San Francisco. He speaks up, asking “Do you love the city?” Somewhat shocked by his question they give a stammering response which prompts Jimmie to respond, “You’re not allowed to hate a city you don’t love.”

It is apparent that both Jimmy Fails and his friend director Joe Talbot love this city. Like all cities, it changes, and those like Jimmy caught up in the change, must deal with it. (It’s been pointed out that before blacks moved in and made Fillmore the “Harlem of the West” that its occupants had been of Japanese descent, forced by prejudice to move to concentration camps shortly after the outbreak of the Second World War. One could imagine a Jimmy Kagawa in 1946 standing outside one of those painted ladies now occupied by darker skinned families and entertaining similar impossible dreams. Thus, this is a film not just of gentrification but also of longing and coming to terms with the cruelty of life. Despite the American myth, not every dream can have a happy ending. But the dreamer can emerge from disappointment stronger for the experience, and then move on to more achievable dreams.

In San Francisco black Jimmy longs to move back into the house his family lost years earlier, his best friend leading him back to reality.
Editor Rating ★★★★★5 out of 5
More Details