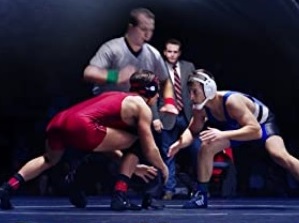 The Lord is merciful and gracious,
slow to anger and abounding in steadfast love.
He will not always accuse,
nor will he keep his anger forever.
He does not deal with us according to our sins,
nor repay us according to our iniquities.
For as the heavens are high above the earth,
so great is his steadfast love toward those who fear him;
as far as the east is from the west,
so far he removes our transgressions from us.

The Last Champion is truly a family film at both ends, from inception to viewing. Families will enjoy its coming of age aspect, sports thrills, and redemptive arc. The film’s beginning is a family affair, with executive producer Hallie Todd married to director  Glenn Withrow and playing a crucial character, plus co-writing the screenplay with Glenn and their daughter Ivy. As an added draw to audiences for this time of year, the first half of the film transpires during the Christmas season, so we have carols and a church Christmas pageant, making this seem like a seasonal Hallmark film with an edge—and I mean this as a compliment.

The “edge” concerns the stark condition of the protagonist. In the dead of winter John Wright (Cole Hauser) returns to the small town of Garfield, Washington. It has been twenty years since he left under a cloud of disgrace. A champion wrestler in high school and college, crowned with the glory of an Olympic gold medal, he lost it all when a lab revealed that his blood sample contained a performance enhancement drug, resulting in his medal being taken away. He has come back to his hometown only because his mother has died, and he needs to get the farm back in shape for sale before the local bank forecloses on it.

He stands outside in the cold for a moment surveying the old  house. It is in as sad a need of repair as is his life. When he enters the local café for supper, patrons stare at and whisper about him. One man leaves, telling the waitress he no longer wants her pie—he has lost his appetite. She herself seems more sympathetic to John, as is Frank Stevens (Peter Onorati) who enters the café. He had been John’s coach, and had apparently never given up on him, as we will see. Nor has the minister of the largest church in town, Pastor Barnes (Bob McCracken), whose daughter Elizabeth (Annika Marks), whom John will see and reconnect with on the street a day or so later. John’s hope for an easy way out of his financial difficulties are dashed when he meets with local banker Bobby Baker (Randall Batinkoff) to request  a loan to pay off the mortgage. Even though they had once been teammates, Baker turns him down.

The second person at a low point in his life is high school wrestler Michael Miller (Sean Scully). His home life is a shamble with his alcoholic mother Melinda (Hallie Todd) neglecting him and his two sisters while cavorting in the local bar with various men. Things are so stark at home that Michael attempts to shoplift a package of meat at the grocery store but is caught. Only by the intervention of his coach is he kept out of jail. At school Michael is one of the best wrestlers, but the others, led by his rival Scott Baker (Casey Moss), bully him.

The two outsiders first meet when both volunteer for the fire department. Later, after a tragedy involving Coach Stevens, John is manipulated by banker Baker to take the job of coaching the wrestling team with the proviso that he favors his son Scott. John will be torn between the two boys. The low point for him will be the night that he witnesses Scott and several other wrestlers beating up Michael on the street. We expect him to rush forward to intervene, but instead he turns and walks away. At home he drinks himself into oblivion, leaving the door of his house wide open to the weather.

John’s turning point takes place when he talks with Pastor Barnes in the church sanctuary. Deeply aware of his low moral and spiritual status, the man is now desperate enough to loosen his taciturn tongue and share his anguish. Fortunately, he finds Pastor Barnes has a listening ear and a compassionate heart. John blurts out his guilt and his shame, and the minister responds, “John, suffering the consequences of your actions doesn’t mean that your life is condemned. God forgives. Period. Just ask Him.” John answers, “I have. I do. Every day,” to which Pastor Barns says, “Well then, my friend, it’s a done deal.” John breaks out in tears, and this moment is so well played out that you might too. If not at this time, then maybe later after John stands in church and apologizes for letting everyone down twenty years ago. Annie, Coach Frank’s wife, stands up and  tells John, “We forgave you a long time ago. But now it’s time to forgive yourself and move on with the rest of your life.” After this, the film’s sports theme emerges, with a re-energized John melding the boys into a fired-up team. All the bullies, except for Scott, repent and ask Scott to forgive their harassment that had led to his hospitalization. John repudiates his deal favoring Scott, so the father has withdrawn his son and enrolled him at a rival school. Part of the suspense at the final state match that determines who will be that year’s champion wrestler is due to these two rivals facing off against each other.

I found this a bit different of a sports film in that I have seen so few that have dealt with the sport of wrestling. The only ones that I can recall are Nach Libre and The Wrestler, two films very different from this one—about professional not amateur wrestlers, and their makers definitely not as interested in the spiritual journey of the protagonists.

More importantly, I found this a refreshingly different faith-based film. Long-time readers will be familiar with my suspicion, and at times disdain for, faith-based films, most recently expressed in my interview with Christian filmmaker Ryan Daniel Dobson in the October issue. In that interview I was happy to see that we both believe that a film should not be a form of visual sermon but a story that shows rather than preaches its message. It is evident that the family trio behind this film agree, the entertaining story demonstrating the need for and the power of forgiveness. The closest we see to Pastor Barnes preaching is when he sits in a pew alongside John and assures him that God is a forgiving, not a judgmental, God. I also appreciate the film’s recognition that forgiveness and acceptance is a communal process, and that as the healing of a divided, broken heart takes place, that person is able to rise to effective leadership. Wounded healers are better able to see and tend to the suffering of others. I love the scene, already alluded to, when John, concerned about Michael and his sisters due to a crisis in their family, joins with Pastor Barnes in calling together the congregation, and the solution arises not from either of them, but from the people.

Not everyone can be reached, a truth the film recognizes in the character of Melinda Miller. She neglects her three children in pursuit of her own pleasure at the bar. It would be easy to despise her by the end of the film, but she is played so well by Hallie Todd that we feel pity for her. As matters stand, she might never realize what she has lost, the love of three precious children, by her act. As with the hard-hearted elder brother in Jesus’ story of the loving father and his two sons, we are not shown how her story will turn out.

I believe this is a film that persons of any or no faith can enjoy and affirm. I chose one of the Psalms for the related text, rather than a New Testament passage, to emphasize the universality of its theme As my seminary  Old Testament professor use to remind us, everything about love and forgiveness in Jesus’ teachings can be found in the so-called “Old Testament.” One of the main tenants of Islam as well is that Allah is merciful. This film should be welcomed by those exhausted by today’s political warfare, especially during this Christmas Season of “peace on earth.”

The story of a disgraced man returning to his home town where he finds redemption for himself & a troubled boy when he becomes coach of the hs wrestling team.
Editor Rating ★★★★★4.5 out of 5
More Details