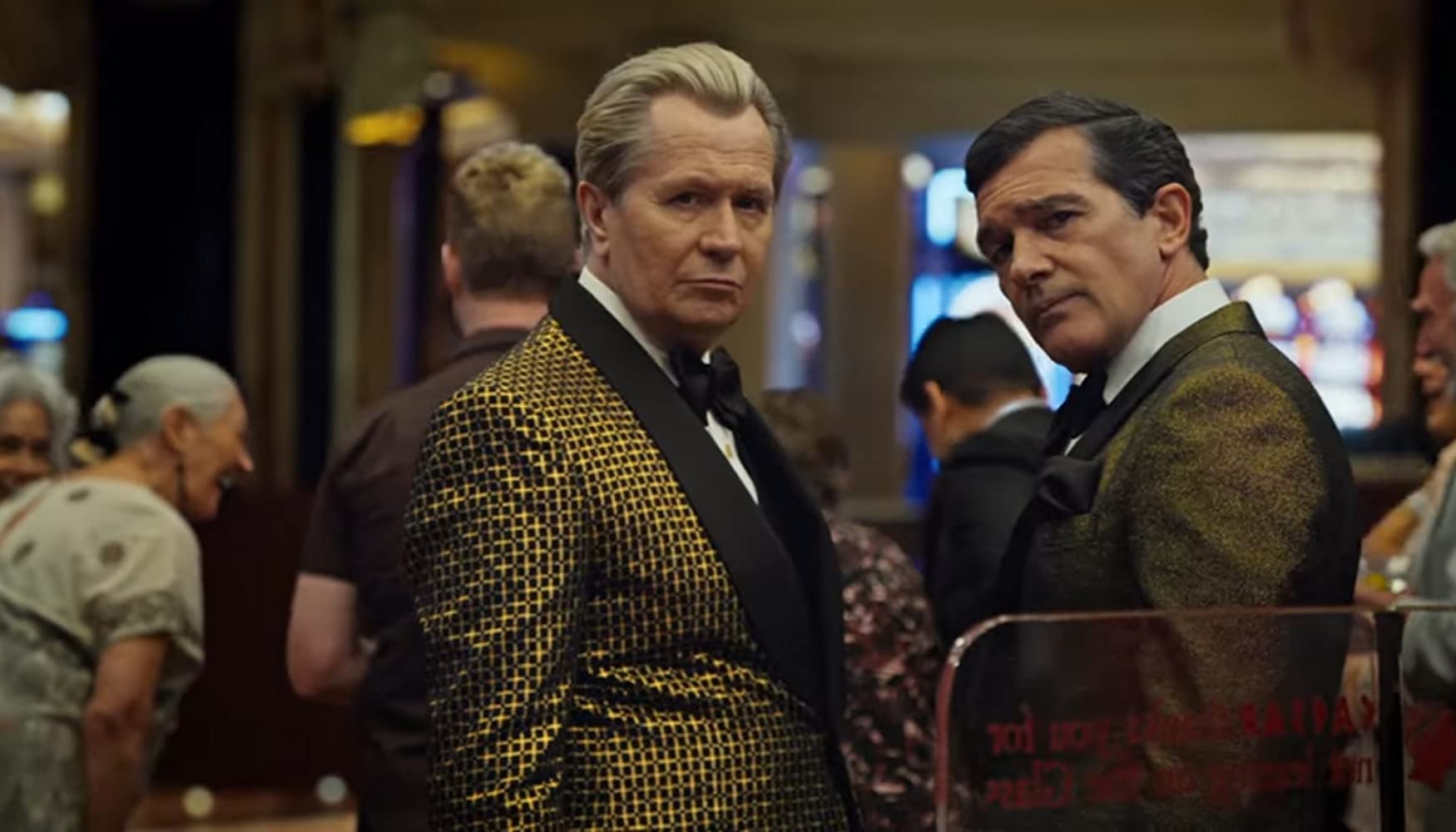 Blessed are the meek, for they shall inherit the earth.


For the love of money is a root of all kinds of evil. Some people, eager for money, have wandered from the faith and pierced themselves with many griefs.


Thank you, Lord, thank you. Thank you for everything. I hate to ask this, but I was just wondering when exactly the meek will be inheriting the Earth?

Steven Soderberg and writer Scott Z. Burns provide an interesting perspective on the 2016 release of the Panama Papers, the release by a whistle blower of over 11 million documents from the Panama law firm Mossack Fonseca that shook up wealthy businessmen and officials of several governments. Based on the book  Secrecy World by Pulitzer Prize-winning journalist Jake Bernstein, they turn the story into a satire told by the two conniving lawyers brought down by the scandal,  Jurgen Mossack and Ramon Fonseca, played by Gary Oldman and Antonio Banderas. In separate chapters they tell several stories that demonstrate the ramifications of complex legal but ethically corrupt maneuverings by which the super rich protect their assets from the tax man and government scrutiny—with, of course, the public bearing most of the cost of their misdeeds. As Jürgen Mossack says, “Tax evasion is a crime. But tax avoidance, that’s what put us in business. And the line between the two, we like to say, it’s as thin as a jailhouse wall.”

The public is well represented by Meryl Streep’s Ellen Martin, who is the “screwed” in the first episode entitled “Secret Number One: The Meek Are Screwed.” She and her husband Joe ( James Cromwell) are enjoying a tour boat ride on upstate New York’s Lake George when a large, unexpected wave capsizes the boat. Ellen manages to stay afloat but Joe several other passengers are drowned. During the claims investigation Ellen learns that she and the other survivors will receive nothing for the loss of their loved ones. The insurer was a shell company owned by a shell company, that had been bought by another shell company, and so on. The shocked boat owners also are screwed, one of them lamenting, “I tried to buy what I needed for less.” The lesson being “Let the buyer beware.”

Ellen is apparently not left destitute, however, nor does she stay “meek” for long. Instead she travels to Panama to investigate the legal representatives of the so-called insurance company, Mossack Fonseca, “the best law firm you never heard of.” Throughout the rest of her story—part of which is hidden, revealed only at the climax–,  Jurgen Mossack and Ramon Fonseca regale us with their insights into the devious ways of the wealthy who juggle companies like they were Monopoly Game tokens and deeds. Enjoying the perks of the rich themselves, they strut about in  tuxedos or brocaded smoking jackets, sipping dry martinis and breaking the “fourth wall” as they explain the complexities of “the secret life of money”, about futures and equities and the creation of shell companies, often located in Caribbean islands and Panama, that are used to hide billions from their governments back home.

In a chapter called “Bribery 101) Charles (Nonso Anozie), a wealthy African, is cheating on his wife with the best friend of his college student daughter Astrid (Jessica Allain). With no sense of shame but confident in the allure of money, he bribes Astrid with the “gift” of one of his companies if she will not tell her mother. The company is worth $20 million, so the naïve young woman swallows her resentment and agrees. Later, when it is too late, she learns that her father has been able to transfer the money out of “her” company by a series of untraceable transactions.

We often read about a financier making a killing in the stock market, but in the story set in China, entitled “Making a Killing,” a ruthless Chinese factory owner  (Rosalind Chao) whose husband holds a high government post, takes this saying literally while engaged in business with a crooked broker trying to get the better of her. All she is left with is a stack of worthless papers.

The filmmaker shows us in these sardonic tales just how widespread the shenanigans of the wealthy are, and why they, the 1% keep growing in terms of wealth, while we, the 99%, continually fall behind. Although the real life Jurgen Mossack and Ramon Fonseca were exposed upon a whistle blower’s release of the Panama Papers (consisting of over 11 million documents), the two spent little time in jail. (And for that matter, can you name any Wall Street speculator punished for causing the financial of 2007-2008?) The filmmakers achieve a sort of justice by the no-doubt fictional ending that reveals the identity of the whistle blower, but the fact that the wealthy by establishing super pacts that finance compliant politicians who refuse to enact the laws necessary to bring into the light of the day the names of contributors or laws dealing with overseas tax havens, the chicanery goes on and on.*

The film is not a reassuring one, with Ellen Martin telling us near its conclusion, “In this system, our system, the slaves are unaware, both of their status and of their masters, who exist in a world apart, and where the shackles are hidden amidst reams of unreachable legalese. It is a result of massive, pervasive corruption of the legal profession. When it takes a whistle blower to sound the alarm, it is cause for even greater concern. ‘Cause it signals that democracy’s checks and balances have all failed, and that severe instability could be just around the corner.”

Although all the cast deserve credit, the presence of Meryl Streep alone makes this such an enjoyable film. And despite the nation-wide closing of theaters, its readily available on Netflix

*As a footnote to this, I learned that part of the background for this partially fact-based story is that the courageous Maltese journalist Daphne Caruana Galizia, one of the investigative reporters who broke the Panama Papers story, was murdered in a car bombing. The corrupt government thus far has been able to avoid a serious investigation, though in a February 2020 story the London Guardian reports that the Maltese prime minister has resigned, but his replacement is another party member who probably will not pursue the prosecution of the alleged killers.

Told by 2 crooked lawyers at its center, this is the story behind The Panama Papers, with widowed Ellen Martin investigating high finance international chicanery.
Editor Rating ★★★★★4 out of 5
More Details