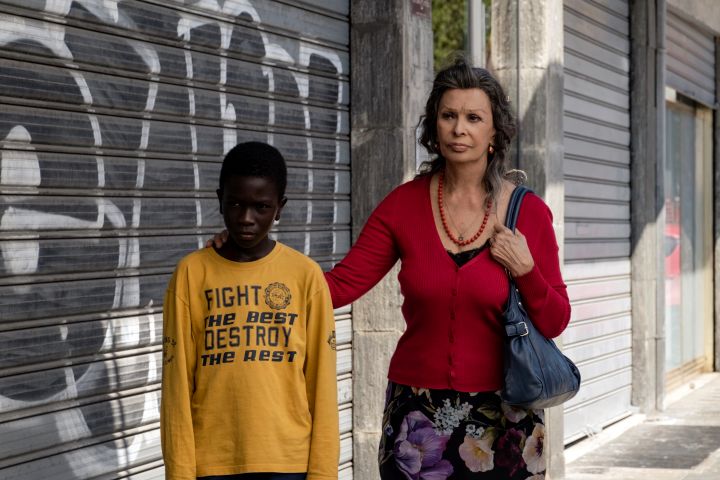 Happy are those who do not follow the advice of the wicked, or take the path that sinners tread, or sit in the seat of scoffers…


… I was a stranger and you welcomed me…

Even were it only half as good, this remake of the Romain Gary novel that became the Oscar-winning 1977 French drama, Madame Rosa, would be noteworthy because of its star and director. The latter is Ms. Loren’s own son,  Edoardo Ponti, who has helmed 7 feature and short films. Sophia Loren, who takes on the role that the great actress Simone Signoret played in 1977, has not made a film since 2010 when she starred as her mother in the autobiographical TV film My House is Full of Mirrors. Her new film is full of sentiment, but it is never mawkish, and it introduces us to a young man who has the potential of becoming a shining star of his own.

Ibrahima Gueye is the incorrigible 12-year-old Momo, who seems hell-bent on his way to becoming a drug criminal in the Italian port city of Bari. Although under the legal guardianship of the elderly Dr. Coen (Renato Carpentieri), the boy’s allegiance is to the local drug lord Ruspa (Massimiliano Rossi), who is very much like Fagin in Dicken’s novel Oliver Twist. It is his voice that we hear occasionally as the narrator. Wounded by life, he is wary of everyone, saying at one point, “I’m not going to suck up to happiness. If it shows up, great.” His given name is Mohamed, but he claims not to like it, preferring to be called Momo instead.

Orphaned when his Senegalese father murdered his mother over her refusal to prostitute herself, the boy has no memory of his native land. During the day he has free reign of the city where he is so industrious in selling packets of marijuana to young and old that Ruspa replaces a much older seller with the boy when he turns in a week’s gross, and it proves to be more than the older dealer had sold in several weeks. The boy earns so much that he is able to buy a beautiful bicycle, though this fades from sight, there being no explanation on how he keeps it hidden from his guardians.

Dr. Coen believes the boy will be better off living with Madame Rosa (Loren) because she provides day and live-in care for children of immigrant street walkers. She is adamantly opposed to his proposal—the boy had recently snatched her purse in the market, and although he reluctantly apologizes when the doctor brings him to her, both know it is not sincere. As the two leave her apartment, the doctor makes her an offer she cannot refuse—a weekly stipend for caring for the boy. She is behind on her rent, so she reluctantly agrees—but only for a short period of time.

The process of their becoming acquainted and overcoming their mutual hostility is predictable, but nonetheless enjoyable. Madame Rosa boards Iosif (Iosif Diego Pirvu) and Babu (Simone Surico),the latter the son of her best friend, Lola (Abril Zamora), a Spanish trans sex worker. Lola dreams of taking her son back to Galicia to meet her father, from whom she has become estranged, no doubt due to her profession. When the newly arrived Momo parks himself in Iosif’s bed, the two get started on the wrong foot, but eventually they become friends also. Iosif and Momo are about the same age, though the latter is larger and physically the stronger. Iosif desperately clings to the hope that his mother has not abandoned him but will one day return to reclaim him. Momo, whose mother had been murdered, scoffs at this.

Madame Rosa is afflicted with spells wherein she loses contact with the world, which alarms Momo. Down in the basement she sometimes retreats to a locked room in the basement where she feels safe and secure from the world. She needs such a place, for the world has not treated her well, as we see by the tattoo on her arm, her prisoner number from her days at Auschwitz. That name means nothing to Momo, of course.

Seeking an ally in coping with her obstreperous new charge because he continues to spend his time in the streets, Madame Rosa asks Muslim storekeeper Mr. Hamil (Babak Karimi) to give him a job two or three days a week. The old man also is reluctant, but gives in, becoming a mentor to the boy. He is just the opposite of the other man to whom Momo looks up, Ruspa. The latter lives off the misery of those to whom he supplies drugs; Mr. Hamil is cultured and kind, extending credit to his needy customers. He seeks to instill his work ethic into Momo, as well as teaching him the value of good books.

Poignancy dominates the last portion of the film when Momo realizes his benefactor is dying. She makes him promise that he will not allow her to be taken to the hospital where she will be alone among strangers, and when she suffers one of her attacks while he is away and she is taken away in an ambulance, the boy launches a plan to rescue her from what she considers an indignity. It is a beautiful if heart-breaking sequence that will linger long in your memory.

This touching film is about the kind of people about whom the prophets and Jesus were concerned, society’s outsiders–we have an orphan, an abandoned young boy, an ex-prostitute and a current one, and an elderly member of a devalued minority religion. The setting is significant, Bari being the destination for thousands of migrants fleeing in overcrowded boats from poverty and political oppression in Africa .* Although this is not an immediate problem for Momo, we do see one scene in which police are subduing a crowd of migrants.

Momo, though he does not at first realize it, is in need of acceptance and a home, and a sense of dignity. Madame Rosa by taking the boy in and coming to cherish him finds that her own needs are met—in Biblical terms, her” bread cast upon the waters” has returned to her. The story of the inner journey of the two outsiders is a delight to watch. Another Netflix film “not to be missed.

When an a former streetwalker is persuaded by her doctor to take in an orphan from Africa, the woman & boy's mutual hostility changes into acceptance and love, enriching her final days.
Editor Rating ★★★★★5 out of 5
More Details