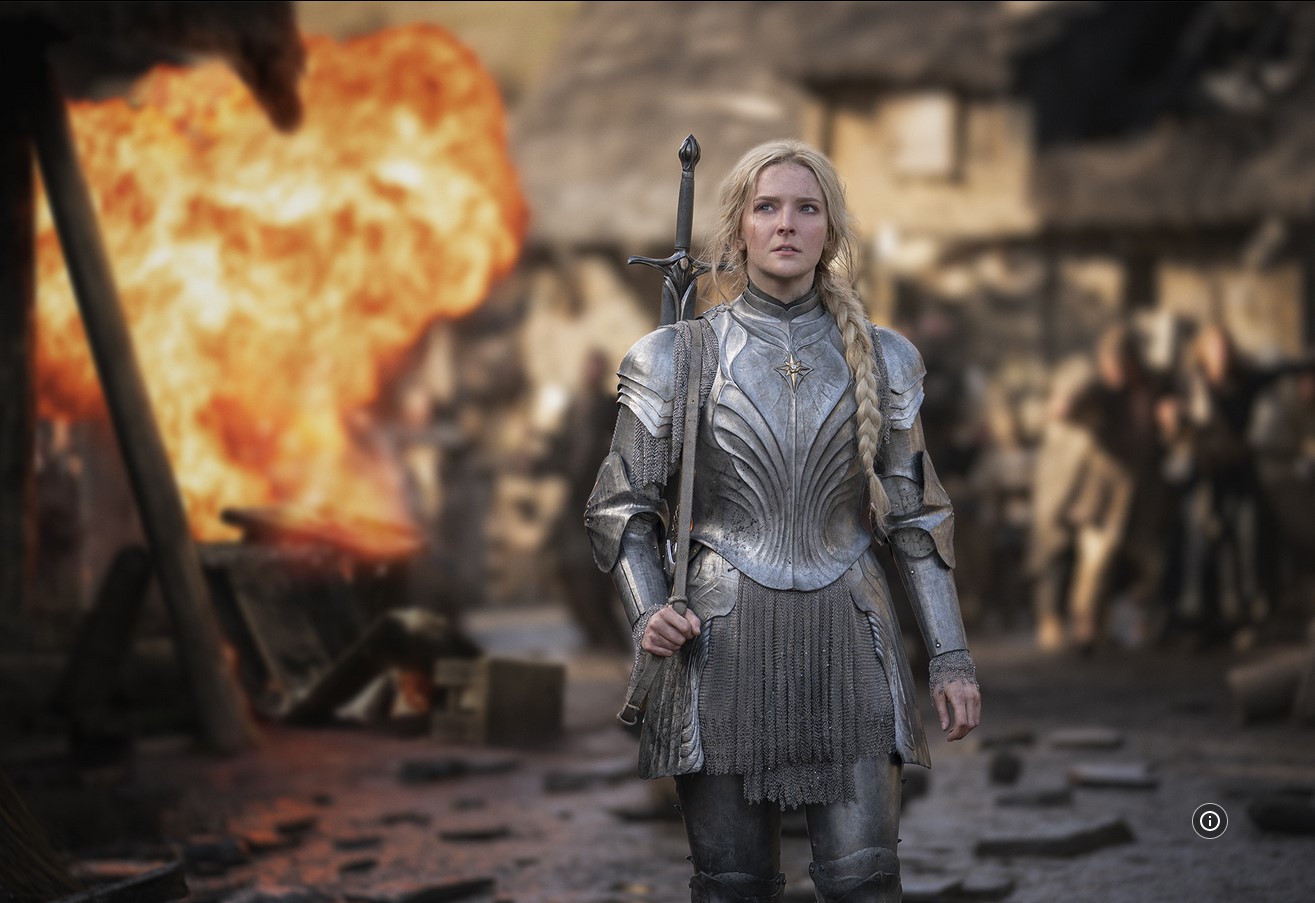 Patrick McKay and J.D. Payne have set out to perform a nearly impossible task—to sort out and stitch together a coherent story from Tolkien’s pre-Lord of the Rings era, and to please the die hard fans of Peter Jackson’s masterful adaptations. That the latter is impossible can be seen by the rush to condemn the series, some even before Amazon premiered the series. I am far from being a Tolkien expert, unlike my daughter Rebecca who has been helpful in coaching me on some of the intricacies of Tolkien’s lore, so after seeing five episodes thus far, I am offering a few observations. In case if you want to know is it worth the investment of your time, I will say up front, “Yes. The episodes might not measure up to Jackson’s films, but they are engrossing.

Rather than go into the complex plot, let me briefly describe a few of the main characters who live in what Tolkien calls “The Second Age”

– First, of course, is Galadriel, much more the Elven warrior here than the statesman ruler she would evolve into later on. She is to her people like Winston Churchill was to England in the Thirties, aware that an evil out there was about to wreak calamity, but no one would believer. She wants to continue the search for Sauron, and so to get rid of her the High King grants to her and her comrades “the honor” of sailing to Valinor to live out their lives in peace. She jumps ship and while swimming back to Lindon encounters a raft upon which are Halbrand of the Southlands and company. Not mentioned in the Tolkien material, this warrior on the was created for the series, his destiny entwined with Galadriel’s.

–Míriel: the queen regent of Númenor,[13] an island kingdom ruled by Men descended from Elrond’s half–Elven brother Elros. When Galadriel and Halbrand are picked up by a ship and taken to Numenor the elf persist in trying to get permission to return to Middle Earth to continue her search for Sauron. But no one here too gives credence to her fear that Sauron will return

–Celebrimbor: the Elven smith is called to build a giant forge to create the Rings of Power, He is famous throughout Middle-earth who is friends with the Dwarves of Khazad-dûm

–Elrond: a half-Elven architect and politician who chose to be immortal, is sent to help Celebrimbor. He decides they need the aid of his old friends the dwarves, so he goes to visit Durin IV, the prince of the Dwarven city of Khazad-dûm. The latter is upset that his friend has stayed away for 20 years, but thaws to the pleading of his wife. Elrond leans Durin’s secret about the huge lode of magical  mithril they have found and agrees to keep it a secret. This will prove a difficult promise to keep.

– Arondir: a Silvan Elf and warrior protecting humans in the Southlands of Middle-earth falls in love with the human healer Bronwyn

–Bronwyn is the mother of Theo, a healer who owns an apothecary in the Southlands. Her human compatriots have come to resent the elves, and so are against her love affair with Arondir. Theo finds a broken sword with the mark of Sauron.

–Elanor “Nori” Brandyfoot and  Poppy Proudfellow are Harfoots, small Hobbit-like creatures who must migrate before winter in order to find food. They find a stranger who falls from the sky in a blazing meteor and keep his presence secret from the other Harfoots.

–Adar: an Uruk who is the leader of the Orcs that have been capturing humans to dig their tunnels in order to reshape the Southlands[.

These characters, and a screen-full of others, populate four different stores, to which we are constantly shifting between. At first this becomes confusing, but it does not take long to get used to the changes. I do recommend binge watching so that you can remember all the strange names. I have not been able to do this, the result being puzzled by who this or that character is. At least with my Amazon membership I can revisit an episode to clear up any confusion.

Some of the criticism are warranted. I agree that the decision to give the elves short haircuts was wrong, making them look too modern. (My daughter dislikes more the women’s hair, thinking it looks too much of the 40s.) But the criticism that the time eras should not be telescoped forgets that Tolkien’s timeline could not possibly be achieved in a TV series.

There are no doubt other flaws that fans will detect, but for many of us this should not keep us from enjoying what we do have. The reported billion dollars that Amazon has spent on the series certainly shows up in the lavish sets, stirring music, and special effects. There are numerous scenes where I want to stop the motion and just enjoy the beautiful shot. The writing may not be up to Tolkien’s standards, but on occasion it reaches memorable heights. I love the insight on friendship when the dwarf Durin IV says to his troubled friend Elrond, reluctant to share what weighs on his mind, “A burden shared may be either halved or doubled, depending on the heart that receives it.”

As one who has never been tempted to delve deeply into the Silmarillion, this series will keep me watching, and at the end of the 9th episode, probably looking forward to the next season.

No discussion questions at this time. I am uncertain whether there is enough interest.

Interspersed stories of elves, Harfoots,dwarves, humans, & Orcs taken from Tolkien's pre-Middle Earth LOR deal with the war against the evil Sauron and the rings of power he seeks.
Editor Rating ★★★★★4.5 out of 5
More Details