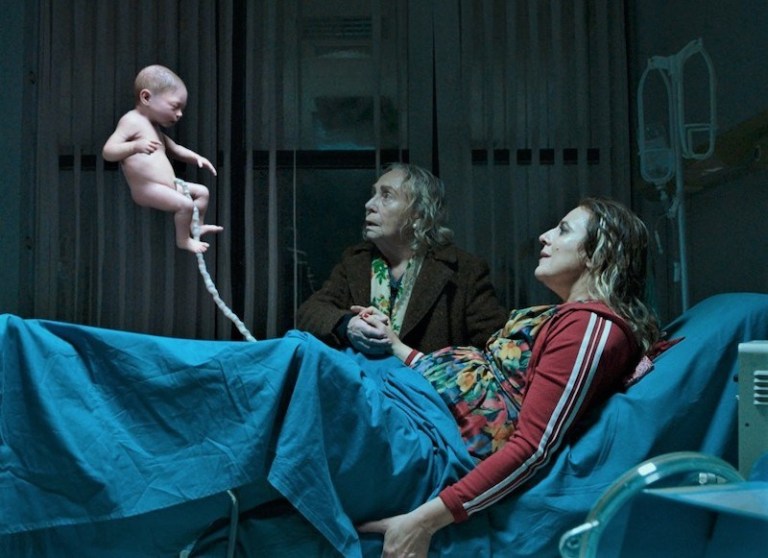 And I say, “O that I had wings like a dove! I would fly away and be at rest;


Guard me as the apple of the eye; hide me in the shadow of your wings.

The Man Without Gravity is an Italian magical-realist tale from first-time narrative filmmaker Marco Bonfanti. Hitherto a documentarian, in his fiction debut he whimsically tells the story of Oscar (Elio Germano), from his incredible birth, through childhood, and ultimate reunion with his childhood sweetheart Agata. At the birth scene as soon as the baby emerges from the birth canal, he starts to float toward the ceiling, tethered to his astonished mother by the umbilical cord. What an entrance! This delightful escapist film about an outsider has plenty of flaws but none that ought to spoil your enjoyment.

Single mom, Natalia (Michela Cesconx) lives in her mother’s house, and the grandmother Alina (Elena Cotta) is more determined than her daughter to protect their unusual child from what she believes will be the harsh rejection of neighbors and society at large. They manage to keep the baby strapped down, and when he is older, make him a jacket loaded with weights. His mother teaches him how to walk, but it is a strange gait due to there being no gravity to keep his legs down. Young Oscar (Pietro Pescara) is never allowed to leave the house, not even to go to school. His grandmother teaches him to read from her Bible. Much of his leisure time is spent watching the Batman cartoon series on TV in which the masked crusader flies. “Batman flies like me, doesn’t he?” Oscar asks his mother. “Yes like a real superhero,” she answers. To which he replies, “So why can Batman go outside but I can’t?” As the story progresses we might well think that the two women take too seriously the above words from the Psalms.

Mother does relent some by allowing Oscar to accompany her on some of her errands in the village. But this is always with the proviso to stay close to her. One day she enters a shop, leaving her son to wait outside. That is when Agata (Jennifer Brokshi), carrying some large bottles of water collides with him and demands that he not only help pick up the fallen bottles but carry them with her to her destination. Of course, Mother is worried not to find him, but upon condition that Agata keep secret Oscar’s ability, she allows the two to play tohether. Until…

The grown Oscar (Elio Germano) and and Mother move away to a house in the mountains where Oscar is regarded by the locals as different, but they remain ignorant of his burdensome gift. He grows so restive that he decides it is time to reveal his ability by entering a Euro talent contest, awing the audience, and accepting a deal by the exploitive agent David (Vincent Scarito). How this works out until at last he meets up again with Agata (Silvia D’Amico) you can find out for yourself—Agata certainly has not improved herself over the years, you will discover!

This might be a fantasy, but it is not for the whole family. It is a clever variation on the Outsider theme, reminding viewers that a gift usually comes with a cost or burden. The first part of the film reminded me of the 1948 classic The Boy With Green Hair. However, that film, coming at a time when Europe was rebuilding from the ruins of WW 2 and trying to reunite the refugee children with their families, had far higher aspirations—world peace—whereas the scope of this little film is more modest. Nonetheless, it provides some entertainment outside the proverbial box. The more I think about it, Oscar’enforced confinement to his home ought to resonate with all those today frustrated with the “stay home” orders from our authorities. The Psalmist expressed it well, “O that I had wings like a dove! I would fly away and be at rest.”

A boy is born not subject to gravity, his grandmother & mom keeping this secret, but as a man he exploits the gift, retires & reunites with a girl.
Editor Rating ★★★★★4 out of 5
More Details