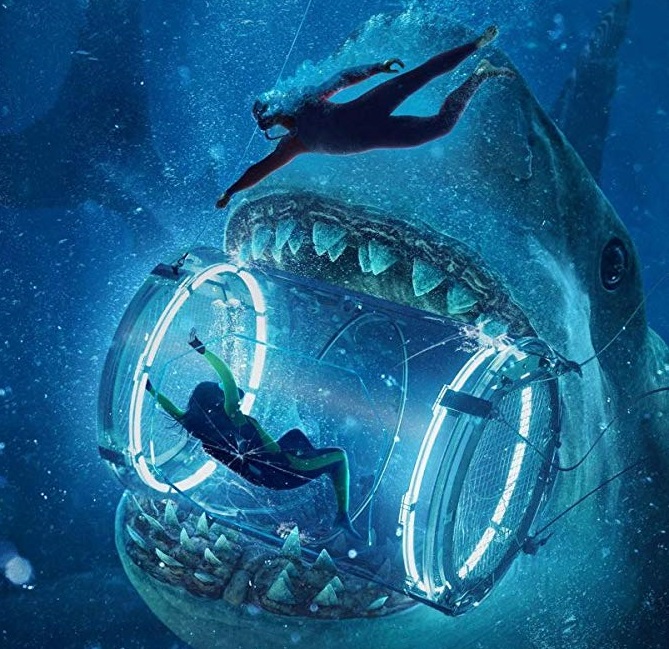 Can you draw out Leviathan with a fishhook, or press down its tongue with a cord? Can you put a rope in its nose, or pierce its jaw with a hook? Will it make many supplications to you? Will it speak soft words to you? …

Director Jon Turtletaub’s summer blockbuster aims to be a Jaws on steroids, the title being a shortened form of Megalodon, a prehistoric shark said to grow up to 75 feet in length. With one of those babies you definitely need a “bigger boat”! And we get one in the gadget-laden vessel that sets out in pursuit of the monster before it can reach a Chinese beach crowded with families cooling off in the ocean waters. While not able to match the quality of Steven Spielberg’s trendsetting shark picture, Turtletaub and company offer us enough action and likeable characters to make a trip to the theater worthwhile—if you go to a matinee or early screening. I saw it on a huge Imax screen, and so do believe that you will miss a lot if you wait to see it on a home screen device.

Partly a cautionary tale like the Jurassic Park series, the film begins with a deep-sea expedition financed by Mana One, headed by Jack Morris (Wilson), his Chinese researcher Dr. Minway Zhang (Chao), and his daughter Suyin (Bingbing Li), also a scientist. She in turn is the single-parent mother of the precocious 8-year-old daughter Meiying (Shuya Sophia Cai). The action begins while they are exploring beneath a gas cloud that enshrouds the bottom of the Mariana Trench where they stir up the monster shark.

With the submersible damaged at the bottom of the sea, trapping its crew, who are you gonna call? Jonas Taylor (Jason Statham), of course, the world’s greatest deep-sea diver—even though he’s been disgraced–during his last rescue attempt he left behind two men. He had saved most of the crew, but had abandoned the two because, he claimed, a giant shark had attacked them. No one believed him, despite his bravery and skills up to this point, hence his retreat to Thailand where he lives in an alcoholic haze.

Just how far-gone he is, we see when he refuses to answer the call to help, “You’re going to tell me your story and I’m going to say no. You’re going to offer me money and I’m going to say no. You’re going to try to appeal to my better nature and I’m still going to say no because I don’t have one.” Of course, he gives in, partly we think at first because his ex-wife is aboard the trapped vessel. We’ve seen this plot before wherein ex-wife or lover rekindles her love after hero saves her. Not this time. Instead, he will be attracted to Suyin and her daughter. Lots of CGI-enhanced action follows and the usual suspenseful shots of the unsuspecting swimmers frolicking in the water off Shanghai’s Sanya Beach while the giant shark bears down upon them.

Although it has been pointed out that the presence of the Chinese characters is due to the huge investment in the film by Chinese backers, it is nonetheless good to see such a mixed cast, moving us beyond the usual parochialism film-wise.

In the Biblical passage above the patriarch Job would have to answer “No” to God’s questions, but good ole Jonas Taylor no doubt would have taken on the Biblical sea monster. It is interesting to see that our hero’s first name calls to mind another Biblical character who survived quite an encounter with another large creature of the deep. But then, that’s another story.