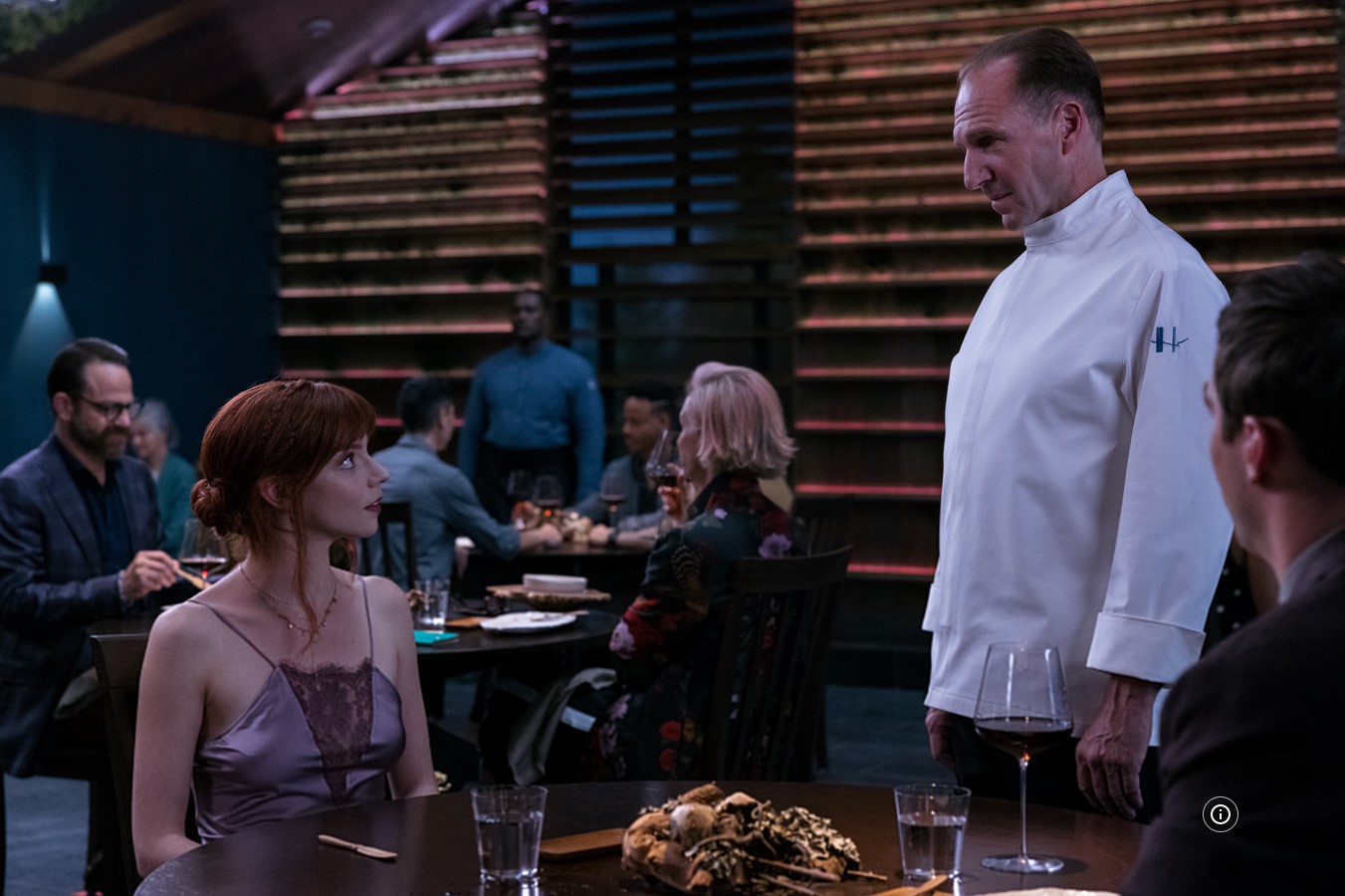 A famous chef invites 12 wealthy guests to his island restaurant, but when one switches dates, his bloody act of vengeance is endangered.

The lips of the righteous feed many, but fools die for lack of sense.

Director Mark Mylod and his distinguished cast must have had a blast bringing to life this dark satire written by Seth Reiss and Will Tracy. What a savage take-down of the 1% living the high life while the 99 % can only imagine the selfish splendor of the super rich.

Tyler (Nicholas Hoult) is a knowledgeable epicurean who brings his date Margot (Anya Taylor-Joy) to dinner at The Hawthorn. The restaurant is located on an island reachable solely by boat, and registrations must be made several months in advance, so exclusive is it. No cell phones are allowed, nor are solo diners. The charge is $1,250 per person—not exactly the price affordable by the 99%.

World-renowned Chef Slowik (Ralph Fiennes) presides over the festivities, aided by a staff of robot-like assistants who all answer in unison their masters questions and commands. And they jump immediately to carry out the kitchen tyrant’s commands, even the most bizarre of them. The guests, twelve in all, are met at the dock by Elsa (Hong Chau), the maître d’ and given a tour of the establishment. Elsa notes that Margot is not the name that Tyler has submitted earlier—thus she is a mystery woman whose identify will be clarified later.

Inside Chef Slowik gives a pretentious welcome with such ominous notes as they are to taste but not eat, and that the evening will end with death. What follows is both funny and yet shockingly bloody. All the guests but Margot are so snobby and morally shabby, especially Tyler, that they deserve their gruesome fates. Among them is a conceited  food critic, an over the hill actor, and just the plain wealthy. We learn that the Chef has grudges against them, and especially Tyler who considers himself an accomplished gourmet meal preparer. (It would have been a neat touch if the Chef had printed on the cover of a menu the famous saying,  “revenge is a dish best served cold”—but were menus provided?)

Slowik claims that they all have contributed to his losing his passion for his art or that they have exploited him in some way. As the film progresses, the guests prove by their behavior, as each of the ostentatious courses are served (prefaced by a wordy monologue by Chef  Slowik), that they are receiving their just desserts –and what bizarre desserts their punishments turn out to be!

The suspense builds as we wonder who Margot really is and does she deserve the fate of the other eleven. Some viewers will find it especially funny when Margot, given her choice of food late in the grim proceedings, shuns the fancy dishes and asks for a hamburger!

At one point calling to mind the 1932 classic The Most Dangerous Game, the film will appeal to those who participated in, or approved of, the Occupy Wall Street movement. While not a dish to everyone’s taste, for social activists the film will be a feast of justice meted out to the rich who have no concern for those beneath them. But be warned, this is not a film for the squeamish.

A famous chef invites 12 wealthy guests to his island restaurant, but when one switches dates, his bloody act of vengeance is endangered.
Editor Rating ★★★★★4 out of 5
More Details