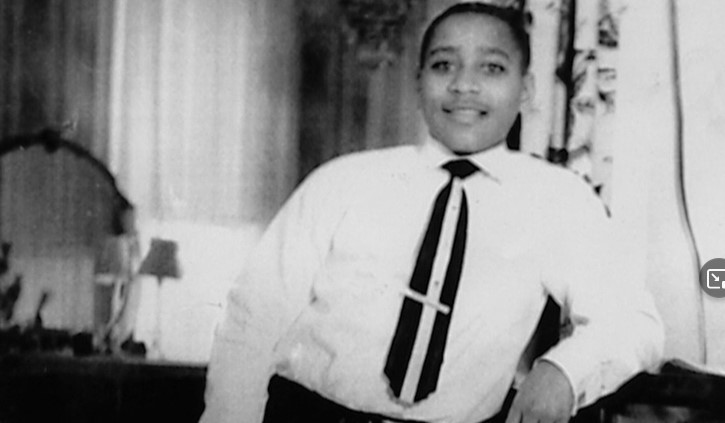 And the Lord said, “What have you done? Listen, your brother’s blood is crying out to me from the ground!


Why, O Lord, do you stand far off?
Why do you hide yourself in times of trouble?
In arrogance the wicked persecute the poor—
let them be caught in the schemes they have devised.

Their mouths are filled with cursing and deceit and oppression;
under their tongues are mischief and iniquity. They sit in ambush in the villages;
in hiding places they murder the innocent.

Their eyes stealthily watch for the helpless;   they lurk in secret like a lion in its den;
they lurk that they may seize the poor;
they seize the poor and drag them off in their net.

Director Stanley Nelson’s 2003 documentary aired on PBS takes on even more relevance as trailers of the upcoming film Till air on our TV sets. This older film is still available on PBS, and so would be either a good follow-up or preparation for the theatrical film. Indeed, not only is the film available, but PBS has also just posted “A Timeline for Emmett Till” that also would be helpful in preparing for the new feature film.

Emmett Till’s name is familiar to all with even a slight acquaintance with the history of the civil rights movement. That a teenage boy would be subject to such horrific torture and murder merely for allegedly whistling at a white woman seems unbelievable today, but it really happened. Through some Africa Americans the film sets up the viewer for understanding Mississippi society in 1955. A man informs us that if a Black person saw a White man approaching, he was expected to step down. This was totally alien to young Emmett Till, growing up in Chicago, still segregated, but compared to the South, offering Blacks relative freedom.

In the film several friends talk about the boy, how he loved jokes and was a lively focus of interest. His mother Mamie talked to him about Southern mores, but the boy did not take her too seriously. What happens as a result of the boy not being careful around Whites is well known. Her controversial decision to open his casket so the world could see the horror of racist hatred is the first of thousands of courageous decisions that African Americans like her will make to fight back against their oppressors. Fifty thousand Chicagoan lined up to pay tribute, and millions more around the world saw the faceless corpse when JET Magazine ran the story and pictures. 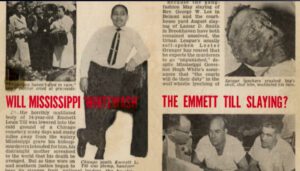 The trial of the murderers– J.W. Milam and Roy Bryant–attracted international attention, the defense’s argument being that the faceless body was not that of Emmett Till. This despite the ring of his father on the corpse’s finger. Of course, the all White jury agreed with the defense, stalling for a few minutes, and then after one hour, re-entering the courtroom to deliver their heinous verdict. The killers got off free and even had the audacity to write an article for LOOK Magazine, explaining in detail how they kidnapped and murdered the boy. Handsomely paid, they had no worries because they could not be prosecuted a second time. The only glimmer of light in the dark sordid affair was that the Bryants’ store went out of business because local Blacks boycotted it.

Up North Mamie spoke frequently about her experience, even traveling to Washington to try to get the federal government to investigate the case. Both Pres. Eisenhower and FBI Director J. Edgar Hoover refused to take any action. The President, we are informed, did not even deign to respond to the telegram she sent him. The film, however refuses to end the true story on a note of defeat, but points out that contributions to civil rights groups began to pour in. 100 days after the trial Rosa Parks refused to give up her seat on a bus, and thus began the Montgomery Bus Boycott, this epic collective effort by Blacks launching the national civil rights movement that would shake the foundations of America. Mamie says, “Emmett’s death was the opening of the civil rights movement. He was the sacrificial lamb of the movement.”

The film, narrated by actor Andre Braugher, skillfully uses a vast amount of newsreel footage, front pages of newspapers, archival photos, and interviews (both from the 50s and from participants who are still living). The interviewees include the mother, Mamie, a couple of trial witnesses, former classmates, residents pf Mississippi, several journalists, the mortician, and the reformist former governor of the state William Winter.

The documentary makes a wonderful companion film to Till, and I suspect provides some details that had to be left out of the dramatic film. I am presuming that Till focuses on Mamie Till, who conducted herself throughout the ordeal with courage and a boldness that kicked over the bounds that society set for a grieving mother. I urge you to take advantage of this documentary and share it with your friends and colleagues.

This review will be in the November issue of VP along with a review of Till. I’ll provide a set of questions for reflection and/or discussion, probably designed to be used with both films.

If you have found reviews on this site helpful, please consider purchasing a subscription or individual issue in The Store.

By detailing the story of Emmett Till's abduction & murder in MS in 1955 the documentary powerfully reveals the horror of segregation.
Editor Rating ★★★★★5 out of 5
More Details