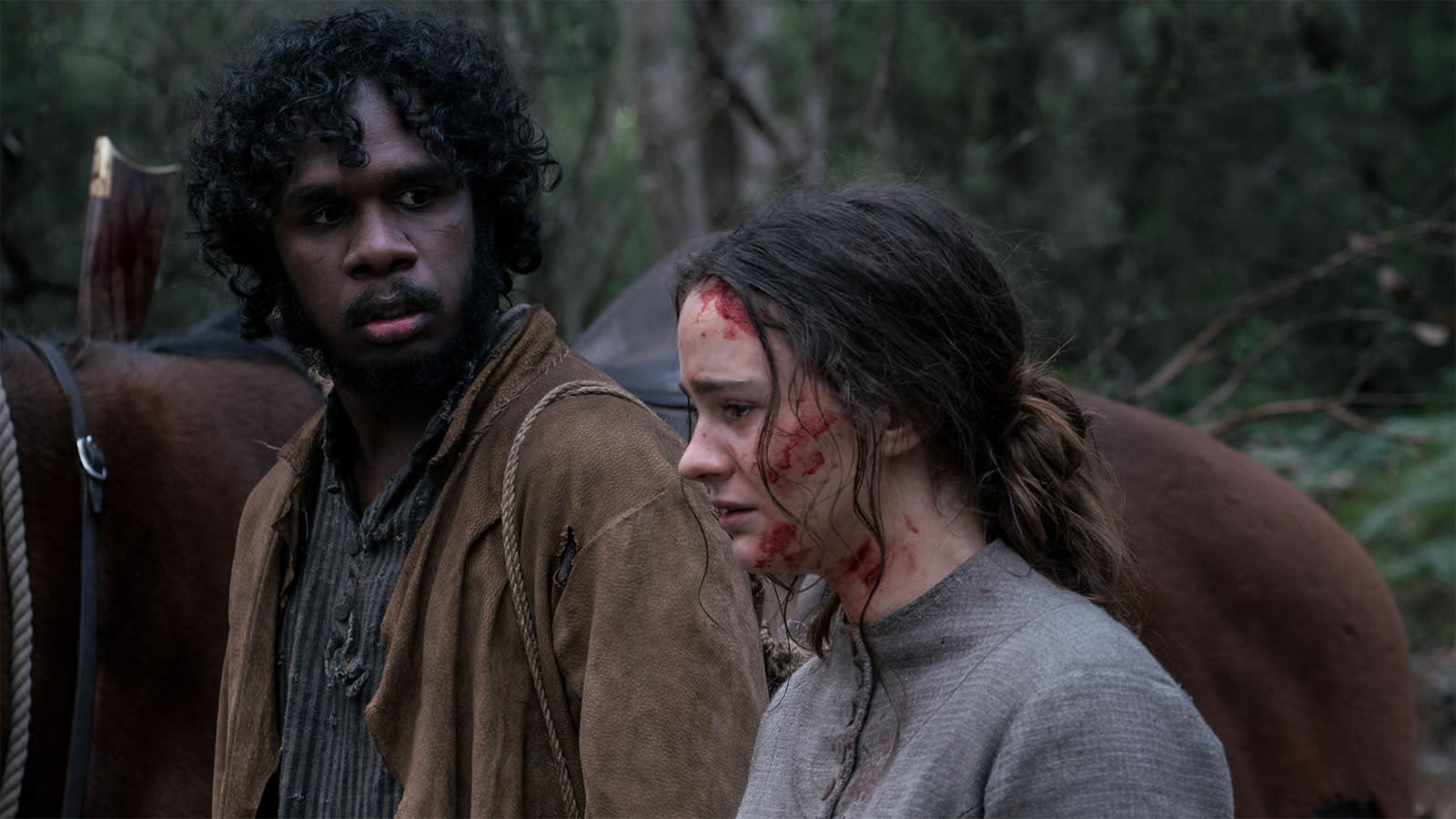 The righteous will rejoice when they see vengeancedone; they will bathe their feet in the blood of the wicked.

Director/writer Jennifer Kent’s second film forces us to watch such intense scenes of violence—vicious rapes; shootings and spearings; bodies hanging from trees; and bloodied corpses lying in beds—that a viewer might well get up and say “Enough is enough” while walking out. But a bit of research into the history of Tasmania’s “The Black War”* will show that, compared to the actual recorded atrocities of the 19th century white colonists, Ms. Kent’s film is a model of restraint. Her debut film The Babadook was a fictional horror story about a mother and little son. In her new film, whereas its story of a white woman and an Aboriginal man might be fictional, the horrors it depicts are real—and deserve to be remembered along with the huge number of other offenses perpetrated by white Europeans when they invaded and seized control of the land in the New World, Asia, and Australia.

21-yer-old Clare (Aisling Franciosi) is an Irish woman transported to Tasmania as punishment for a minor theft in her homeland. At that time, this island off the southeast coast of Australia was called Van Diemen’s Land. Clare lives by night with her Irish husband Aidan (Michael Sheasby) and their baby in a small hut, but for most of her waking hours she is indentured to the arrogant English officer Lieutenant Hawkins (Sam Claflin). It is 1825, and her 7-year sentence is up, but Hawkins puts off applying for the papers that will declare her free. He has become obsessed with her for unsavory reasons. As we see at the beginning of the film, he enjoys his power over her, insisting that she sing for him and his fellow half-drunk soldiers at the pub where she works as a serving girl. She sings songs of her native Ireland well, hence her designation as “The Nightingale.” Afterward, the officer abuses her to the point of rape. He gives her trinkets, but these cannot purchase her affection. She makes up excuses for her bruises to keep her abuse from her hot-tempered husband.

One night in her hut, in front of Aiden and two other soldiers, Hawkins shouts, “She’s my property, and I’ll do what I want with her.” He rapes Clare before them all. Two of his underlings, the brutal Ruse (Damon Herriman) and the weak-willed Jago (Harry Greenwood), have accompanied him. When Aiden breaks free from Ruse, Hawkins kills the outraged husband, and as the baby keeps crying despite his demands that it stop, the officer orders Jago to kill the child as well. The young man is clearly reluctant to follow orders, but eventually obeys.

The next day desperate Clare’s plea for justice to a judge are met with, “Do you want me to take the word of an ex-convict over that of an officer?” As thirstful for vengeance as John Wayne’s Ethan Edwards in The Searchers, Clare vows to seek vengeance herself. But by now Hawkins has left with a party of soldiers, a tracker (an old man but still called “Boy”!), and a convict pressed into service as a porter. A visiting officer had refused Hawkins’ request for promotion, so he intends to go the northern town of Launceston where there a captaincy is available, thus going over his commander’s head. No neighbors will accept Clare’s entreaty to guide her to Launceston, but one suggests that she hire the Aboriginal tracker Billy (Baykali Ganambarr). Only after a lot of wrangling does he reluctantly agree to escort her through the dangerous Tasmanian bush.

As filled with racial prejudice as any of the white men, the gun-toting Clare is not interested at first in learning the name of her guide. Like all of the other whites, she calls him “Boy,” a demeaning address that African American viewers can relate to. Billy, we discover, was orphaned at an early age when his parents were murdered in front of him. He has eked out an existence as a tracker, one of the Aborigines who has not joined in the on-going war between the small amount of remaining blacks and the encroaching whites. As they travel through the wilderness, they see gruesome signs of the war—bodies of Aborigines strung up on a tree, settlers’ cabins ravaged and a couple lying dead in bed, bludgeoned or speared to death.

The nightmares of Clare in which she sees her dead loved ones, as well as the atrocious deeds of Hawkins’ party traveling through the wilderness and coming upon a hapless Aborigines mother and child, keep reminding us of the director/writer’s skillful blending of the horror and Western genres. But the film is more than this, much more, as we see in the slow but steady dismantling of the high wall of racism that prevents vengeance-seeker and tracker from seeing each other as human beings. Their blindness to seeing that both of them are victims of the power structures slowly gives way to dawning recognition. When Billy lumps together their oppressors as English, Clare strongly protests that she is Irish, not English, declaring that her land has also been subjected to English prejudiced brutality. At a turning point in their relationship Clare says, “You know what it’s like to have a white man take everything from you.” When she at last asks her tracker for his name we realize she is beginning to regard him as a human being and not a disposable tool. Billy tells her that he is a Letteremairrener and that he is a “Mangana” (blackbird). At one point Billy declares, “I don’t ever want to be like a white boy, not now, not ever.” During the cold nights Clare has slept as far away from Billy as possible, but as they change their views of each other, she moves closer to him for the warmth—though never touching him.

The film’s over-all assessment of whites is dark and grim, but the trekkers do meet a couple that have retained their spark of humanity, an old husband and wife who take them in and serve a supper of soup to them. Clare is sitting at their table with the hosts, and Billy is crouched on the floor against a wall.  In a wonderful moment of grace, one of the few in the film, the old man invites Billy to join them at the table. Obviously, it is such a revolutionary act to the Aborigine that he remains sitting. Only after the man repeats the invitation a couple of times does Billy comply. As he sits in a chair with the three whites he sobs and says, “It’s my country.” More sobs. “This is my home.”

The avenging duo do catch up with the Hawkins party, much bloodied and reduced by Aborigines spears along the way, but the encounter results in Clare and Billy being separated instead of achieving her goal. By the time Clare reaches the town the two are reunited after some adventures, and Hawkins has…Well, you must learn this for yourself. Ms. Kent’s attempt to make the conclusion uplifting involves a beautifully photographed rising sun scene at the seashore infused with, as several other scenes are, a touch of Aboriginal mysticism. What the future holds for them is left to us to conjecture.

The film deserves the criticism that the villains are painted with such a tarred brush that they become monsters—and yet when we read of what such men actually did to the Aborigines (and the soldiers did to many of the exiled convicts), such complaints lose much of their force. The terrible truth is that the mighty British Empire, whose proponents justified their conquests with the claim that they were bringing civilized values (and religion) to savages, was built on blood elicited by horribly inhumane practices, underpinned by white racism. As well as depicting the anguished thirst for vengeance, the film portrays the difficult path from racism to enlightenment and reconciliation. The script never veers toward a Hollywood sentimentality that would have led to a romance between the two protagonists. These are two terribly wounded human beings who find a measure of healing for their souls by getting to know each other during a several day ordeal. Clare bears the additional burden of an ancient misogynism that has regarded women as sexual toys for powerful males, and yet as she emerges from its deep and dark pit, she does not become some Wonder Woman-like warrior, able to take on and take out an army of lustful, over-confident males. The film is well grounded in reality. The repugnant violence is about as graphic as anything in a Quinten Tarantino film, but does not seem as gross. Ms. Kent never hints that violence is entertaining or that vengeance is fun.

I hope the film, shown only in an art house theater (to a very small audience on the night I saw it) in Cincinnati, will soon be taken up by a streaming video outlet. By shedding light on our dark past—though set on the other side of the world from America, it broadens our understanding by showing that racism and sexism are world-wide afflictions—it helps us see how we have arrived at the mess we have inherited. And offers a little hope that there is a way out of racism.

In 19th c. Tasmania an Irish woman seeking vengeance for the murder of her family hires an Aborigines to track down the guilty British soldier.
Editor Rating ★★★★★5 out of 5
More Details