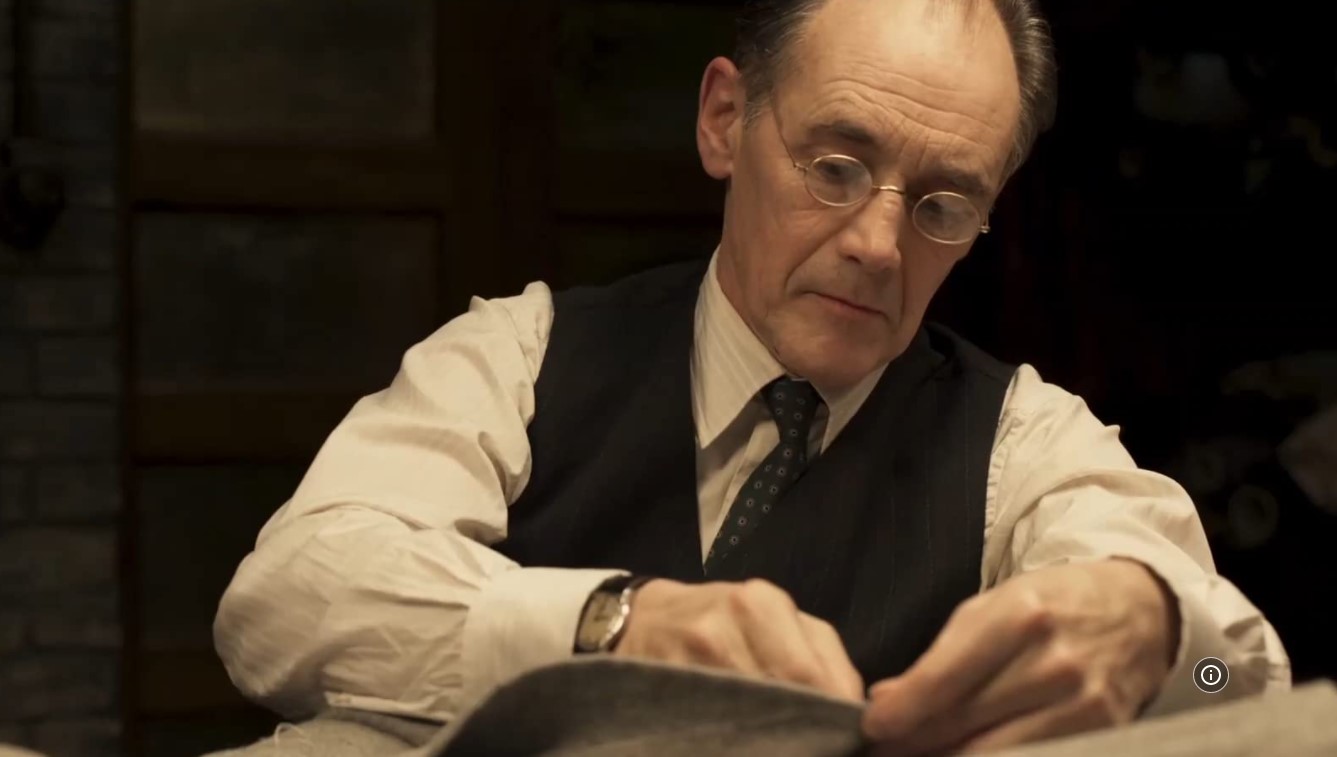 Blessed are the meek, for they will inherit the earth.

Here is a suspenseful film tailor-made for lovers of film noir—though don’t call its mild-mannered protagonist Leonard (Mark Rylance) a tailor. He will impatiently retort that he is a cutter, not a tailor. As he says in the film, a tailor sews on buttons, whereas a cutter with his shears cuts the fabric into a suit. As I recall, he states that it takes over 220 cuts to fashion an outfit for a customer. However, the film’s title, we soon learn, refers to something far more sinister than a fancy suit made for a rich gangster or business man.

Set in the 1950s, director Graham Moore’s film is the story of Leonard, who has been opening up his modest shop in the same seedy side of Chicago ever since leaving London’s Saville Row after WW 2. One of his first customers was mob boss Roy Boyle (Beale) who helped set him up for business when he had arrived penniless. The payback was that he host in a back room a wooden box through the slot of which a steady stream of men dropped envelopes of money and messages. Leonard never looks up from his stitching and cutting as the men come and go, though we get the impression that he sees everything going on about him. Neither he nor his lovely secretary Mable (Zoey Deutch) speak to the messengers.

The action unfolds in a span of one day inside the shop. During the rainy night Roy’s son Richie (Dylan O’Brien) and his steely-eyed companion Francis (Johnny Flynn) suddenly appear. Richie has been hit with a bullet during a gunfight with another gang. Frances orders Leonard to sew up the wound, lest Richie bleed to death. Reluctantly, under gun point, Leonard complies. Roy has to leave for a while, so he leaves the wounded Richie and a tape casset te, said to reveal who has been informing their rivals and the Feds of the gang’s activities.

The plot grows more complicated and suspenseful with a falling out between Roy and Richie, and then Roy shows up looking for his son and a Mexican stand-off ensues, with the seemingly hapless Leonard in the middle.

Only Leonard is no more hapless than was Bre-r Rabbit in those old tales about the rabbit that survived by its wits. This is a far bloodier tale than the Southern fables, so this dark tale is not for the squeamish. It will become evident that Leonard is as skillful at scheming as he is at cutting material for a suit. The twists at the end of all the violent acts ironically vindicate the promise that the meek will inherit the earth, though definitely not in the way that the author of the saying would approve.

A mild mannered taciturn ex-London cutter proves smarter than the mob boss who uses his Chicago tailored suit shop as a drop-off for money & messages.
Editor Rating ★★★★★4 out of 5
More Details