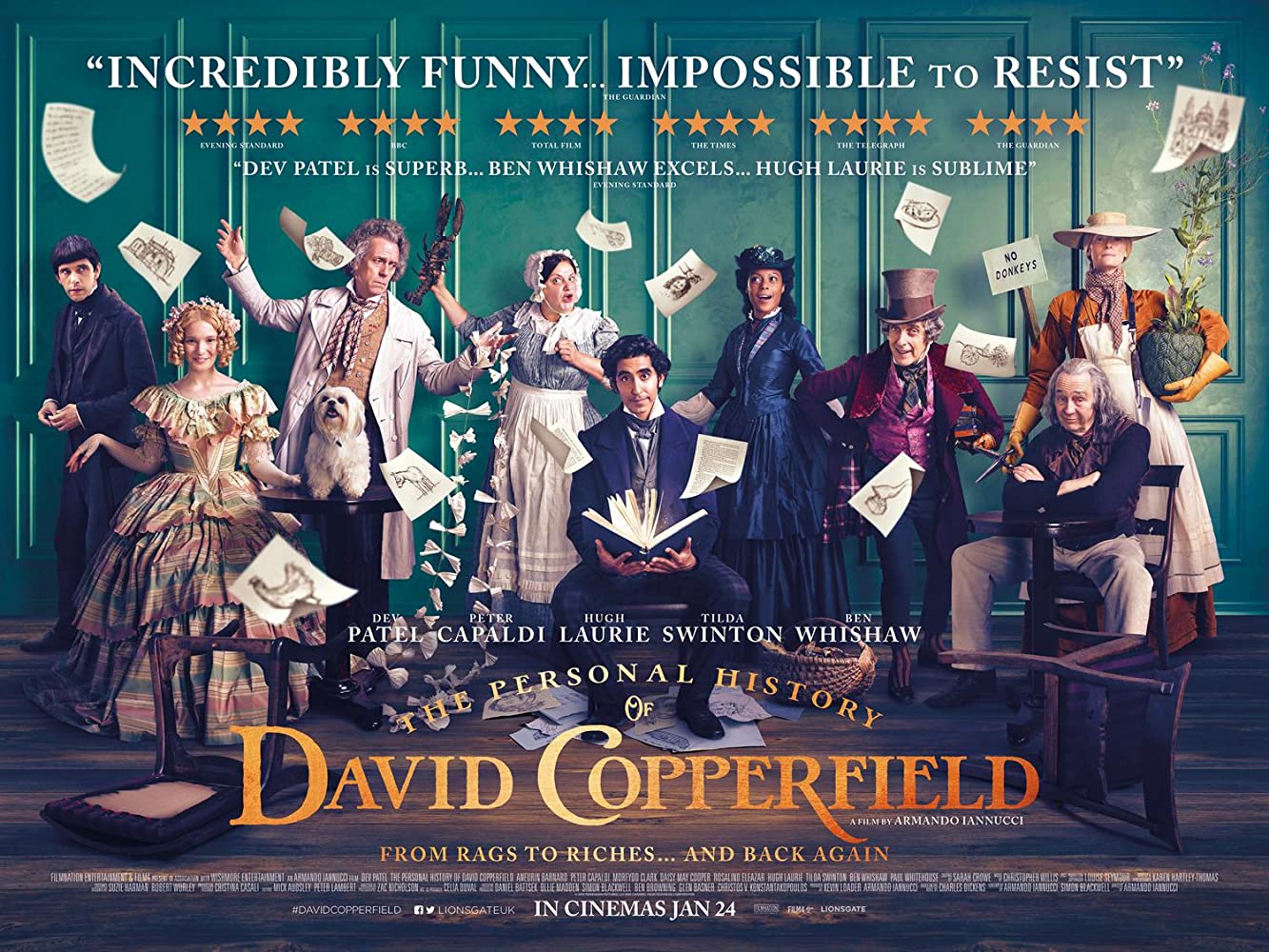 It (wisdom) will save you from the way of evil,
from those who speak perversely,
who forsake the paths of uprightness
to walk in the ways of darkness,
who rejoice in doing evil
and delight in the perverseness of evil;
those whose paths are crooked,
and who are devious in their ways. 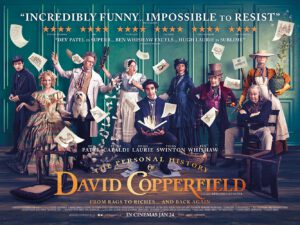 Regarded as Charles Dickens’ most autobiographical novel, David Copperfield had been filmed 13 times before Armando Iannucci adapted it. Thoroughly enjoying his political satire, The Death of Stalin, I was looking forward to seeing this new version, noted for its color-blind casting and touch of surrealistic absurdity. I was not disappointed, the director and co-writer Simon Blackwell giving us a whimsical romp through the sprawling novel in just under two hours.

Like the real-life Dickens, David (Dev Patel) is reading from his memoir to a theater packed with admirers, and so we hear the famous words that begin the novel, “Whether I turn out to be the hero of my own story or whether that station will be held by anybody else these moments must show.” He walks into a backdrop of rural England to the house where his mother is giving birth. His Aunt Betsey Trotwood (Tilda Swinton) is on hand, confident that the infant will be a girl, which she insists will bear her name. Disgusted when it is announced that it is a boy. She puts on her bonnet and marches out of the house, angry as if the mother had intentionally slighted her. David claims to have remembered this and subsequent events.

Young David (Jairaj Varsani) is happy with his mother and family servant Mrs. Peggotty (Daisy May Cooper), both doting on him. A keen listener, he jots down on scraps of papers the unconsciously funny things that Mrs. Peggotty spews out, as well as various sketches. Like many a good writer, he hangs onto them through the years so he can incorporate them into his writings. He has a great time traveling with Mrs. Peggotty to Yarmouth where her brother and family live in a quaint house made from a boat turned upside down. It sits on the beach, so there is plenty for a curious boy to see and do. In the first visit it is bright and cheery, but when David visits it years later as an adult, it is darker and cramped. He constantly hits his head as he moves through it.

A lot transpires between the two visits. David’s widowed mother is pressed by society into remarrying, and her choice is the dour Mr. Murdstone (Darren Boyd) whose equally sour-puss sister Jane (Gwendoline Christie) comes with him. David is shunted off to London to work in a bottling factory, thus raising the issue of child labor and the exploitation of children. In the novel wine is the content of those bottles, but in the film, it is boot blacking, which reminds us that is the kind of factory Dickens himself toiled in as a child. The author’s father’s indebtedness is reflected in Mr. Micawber (Peter Capaldi), who is so hounded by his creditors that he has to hide behind horses when he spots them on the streets. The scene in which they besiege his home, snatching clocks and rugs through a window and the slot beneath the front door is surreal. He plays a squeeze box but his wife (Bronagh Gallagher) is the only one who thinks the discordant results are music–“Angels in his fingertips!” she says. Also, like Dickens’ father he spends time in debtor’s prison.

Another memorable character is Mr. Dick (Hugh Laurie), the mentally ill lodger at Aunt Betsey Trotwood’s estate. He is obsessed with the beheaded King Charles I, pasting his words and portrait onto the large kite that he carries everywhere with him. We have already seen that Betsy Trotwood is quite a character. More of her eccentricity comes out in her loathing of donkeys. When some ignores her donkey’s not allowed signs, she rushes out to beat them off with a staff. Then there is of Mr. Wickfield (Benedict Wong), the lawyer for whom David goes to work. David ha known the man’s daughter Agnes (Rosalind Eleazar) since childhood. She is always supportive of him, but he is blind to her love for him. Instead his heart is set on the flighty Dora Spenlow, played by the same actress who had portrayed his mother, Morfydd Clark.

Replacing Mr. Murdstone as chief villain is another employee of Mr. Wickfield, Ben Whishaw’s oily, overly obsequious Uriah Heep (Ben Whishaw). He plots to take over the firm right from beneath his employer’s nose. James Steerfort as David’s selfish friend from school days becomes a minor villain when at Yarmouth he seduces and runs off with the Peggotty’s niece Emily. Their story adds a touch of tragedy to the proceedings.

However, the comic far outweighs the tragic in the film, both that which is native to the novel and that which Armando Iannucci brings to the story. From Dickens we have Mr. Dick’s obsession with King Charles I in the following exchanges:

–Mr. Dick: Somebody! Somebody, please! King Charles I. Are we certain that he’s dead?
Betsey Trotwood: When last seen in public, his head was not attached to his body.
Mr. Dick: Good. Thank you. Much obliged.

–David Copperfield: What are you doing?

Mr. Dick: My mind is as clear as a soap bubble!

When David faints, his Aunt comes to his aid:

David Copperfield: This is salad dressing.

Betsey Trotwood: Is it? Thought it was Armagnac. Don’t have my spectacles on.

David Copperfield: Do you have lettuce somewhere covered in ointment?

In the short sequence when David falls in love with Dora, he sees her fancy hair do everywhere—in the clouds, even an animal is coiffed in her golden tresses. Those who have not read the novel might despair of his ever discovering that Agnes is meant to be his true love, but fear not, faithful Agnes Wickfield will remain unspoken for until…

The film is a delightful tale of a man coming into his own despite many setbacks. For many years David submits to names bestowed on him by others–Daisy, Doady, Trotwood, Davidson, and even “the famous biting boy.” But at the end, aided greatly by his Aunt, we see him take the podium and insisting on “David Copperfield.” He does indeed find the wisdom that saves him “from the way of evil,” the “crooked way” trod by Uriah Heep and James Steerfort. David Copperfield does indeed become the hero of his own story, and many are the better for him, including us viewers.

The comical aspects of Dickens' autobiographical novel is enhanced in this 14th adaptation of the story of a writer, from birth through troubles to true love & success.
Editor Rating ★★★★★4.5 out of 5
More Details