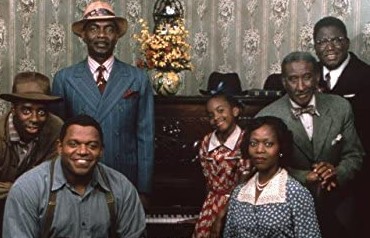 The boundary lines have fallen for me in pleasant places; I have a goodly heritage.


Therefore, since we are surrounded by so great a cloud of witnesses…

August Wilson’s wonderful play is currently in a Broadway revival, but for those of us unable to travel to New York, there is the excellent Hallmark TV version broadcast in 1995, now available on DVD. (I bought my copy at one of those Big Lot-type stores for $2! It is also available on Prime Video.) The play is No. 5 in his 10-Play Cycle, all but one of which is set in Pittsburgh, hence the name The Pittsburgh Cycle. We have reviewed two others of the Cycle that have been made into movies, Fences and Ma Rainey’s Black Bottom.

Adapted for the Hallmark TV series in 1996 by the author, this play is set in 1936 at a home of African Americans who have left Mississippi for better opportunities in the North. The plot centers on a brother-sister dispute over an heirloom elaborately carved piano. The brother is looking ahead and little interested in the past, and the sister is partially stuck in past traumas while trying to get by in the present. It turns out to be a ghost story, in both the figurative and a literal sense.

The story begins as Boy Willie (Charles S. Dutton) and Lymon (Courtney B. Vance) are traveling north with a load of watermelons in Lymon’s rickety truck. It is 5 A.M. when they arrive at the Pittsburgh house of his Uncle Doaker (Carl Gordon). Willie’s sister Berniece (Alfre Woodard) is a widow living with their Uncle and her 11-year-old daughter Maretha (Zelda Harris). She is still asleep when Doaker goes downstairs to answer the door. Boy Willie takes no notice of the older man’s complaint about the early hour. Bernice is clearly not pleased to see her brother when she finally does join the three men, even though it has been three years since she had left their home state.. She probably knows why her brother has sought her out, and it is not just to sell a truck-load of water melons.

Willie reports that Sutter, owner of the farm where the Charles family had been enslaved, has died, and that the heir has promised to sell the land to him. All he needs is the revenue from selling the watermelons and his half from the sale of the family piano to add to his savings, and he can buy the land. Throughout the film he will affirm his belief that a man with land will be respected, even by White Mississippians*. Berniece declares that she will not sell, and goes upstairs to bed. As the men continue to talk there is a scream upstairs, Berniece claiming to have seen Sutter’s ghost and that her brother probably has killed him. Boy Willie denies this, saying that Ghosts of the Yellow Dog killed the man and that Sutter haunting her is another reason to sell the piano. A little later she will also accuse her brother of being responsible for her husband’s death when the two of them were involved in a caper together.

How the two continue to interact, and how the ghost helps resolve their dispute is fascinating to watch. There is also a suiter seeking to relieve Berniece’s lingering sorrow: Avery is a gentle soul hoping to become pastor of a church. Later his attempt to exorcise the ghosts will partially help Berniece to deal with her ancestors represented by the carvings in the piano.

Especially powerful is a sequence beginning just before the 31-minute mark that is bookended with music. The four men—Boy Willie, Lymon, Uncle Doaker, and Winning Boy (Lou Myers), an impoverished musician/gambler—are sitting at a table drinking and talking when one mentions and starts singing, much to the embarrassment of Lyman. It is “Berta, Berta,” a song they learned when they were prisoners at the brutal Parchman Prison Farm. One by one they join in, tapping their feet rhythmically, the song taking the form of a slave/prison/work song. The men become lost in the song as bad memories are conjured up, Willie even mimicking using a sledge hammer or pick. The song overflows with energy at its height, the quick camera cuts jumping from their faces to their feet to their hands, and then a long shot of all four. Then one by one, the voices cease unto just Doaker’s bass voice remains, until he realizes the others have stopped. Willie and Lyman talk again about selling the piano, and it is then that Doaker tells them why Bernice will not sell it. Accompanied by flashbacks to the slave plantation how the white Mr. Sutter family acquired the piano for his wife from a man in Georgia. They had little money, so they let the piano owner choose a slave and a half—their grandmother and her boy, thus cruelly separating the family. Years pass, and when Mrs. Sutter grieved over her two missing slaves, Mr. Sutter asked his carpenter father, also named Willie Boy, to carve the faces of the departed father into the piano. He not only did this, but also carved their wedding and a birth in the end panels, and sculpted the legs as well. He goes on to relate the history of the piano, how it led to the deaths when the Charles family stole it when they were freedmen. Thus, carved in African style, the piano embeds the bloody history of the family, something which Berniece cannot let go. The sequence ends with Winning Boy giving in to entreaties to play the piano. He pounds out a lively juke joint song, then men breaking into dancing, Willie Boy surprisingly lithe and dexterous. Then Berniece returns home from shopping.

The story is a memorable tale of family conflict and coming to terms with the past. As Doaker says at one point, neither brother nor sister is in the right. Both have legitimate claims to the piano—he for wanting to sell it so he can acquire land and a sense of dignity and security; she for not wanting to play it or sell it because of the family’s bloody history embodied in it—as well, as seemingly the ghost of the long dead white oppressor within it. The way by which she is able to make peace with their ancestors celebrated by the carvings you will remember for a long time. And yes, Willie Boy too will come to a far deeper understanding of their heritage.

*While writing this review I have been reading Kim Lacy Roger’s book about the aftermath of the civil rights movement in Mississippi, LIFE AND DEATH IN THE DELTA: African American Narrative of Violence, Resilience, and Social Change, affirming Willie’s belief. The author asserts on p. 74, “It is difficult to over emphasize the self respect and psychological freedom that landownership gave to African Americans in the delta.” This is repeated numerous times in the chapter about Bolivar County.

This review will be in the November issue of  VP along with a set of 9 questions for reflection and/or discussion. If you have found reviews on this site helpful, please consider purchasing a subscription or individual issue in The Store.

A Black brother & sister in Pittsburgh argue over selling or keeping a piano carved with images of their Mississippi slave heritage.
Editor Rating ★★★★★5 out of 5
More Details