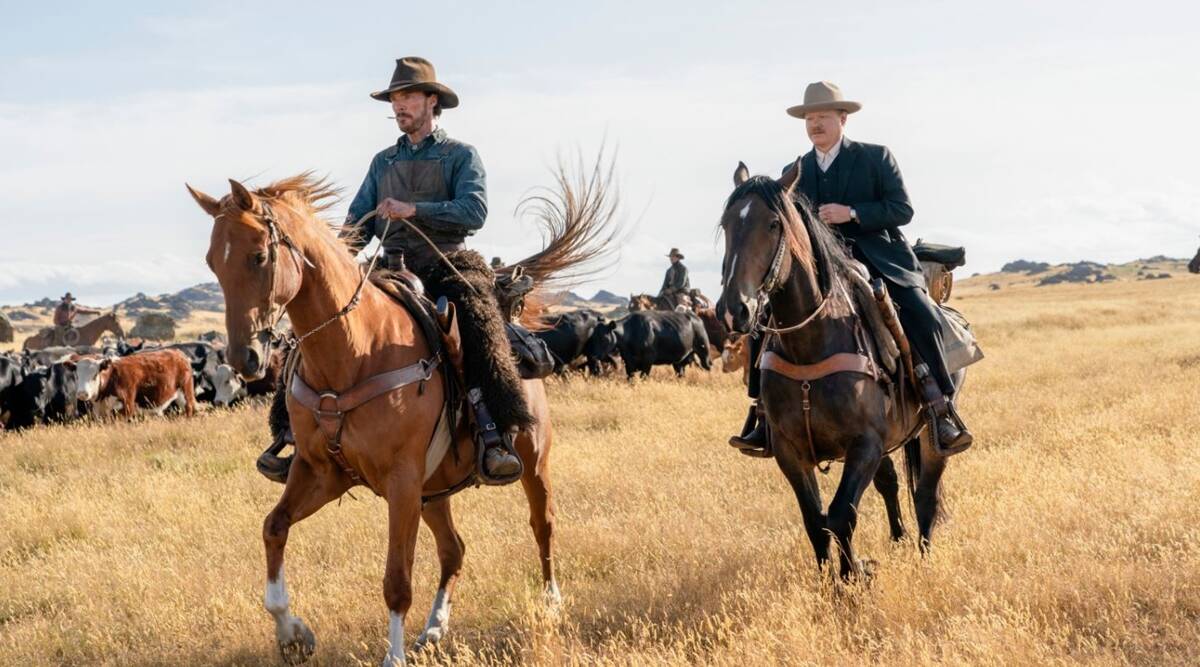 Deliver my soul from the sword, my life from the power of the dog!

Beloved, never avenge yourselves, but leave room for the wrath of God; for it is written, “Vengeance is mine, I will repay, says the Lord.”


He has brought down the powerful from their thrones,
and lifted up the lowly;

he has filled the hungry with good things,
and sent the rich away empty.


Note in the last two paragraphs, and in the set of questions that will accompany this review in the VP journal, are several spoilers, so if you have not seen the film, stop reading before the end. I think you will enjoy the discovering for yourself what this subtle film is really about.

Director/writer Jane Campion’s adaptation of Thomas Savage’s 1968 novel is set in Montana, but she has found a region of her native New Zealand as a serviceable stand-in. The story of two brothers, George (Jesse Plemons) and Phil Burbank (Benedict Cumberbatch) unfolds in laconic fashion with lots of contrasting close-ups and shots of rolling ranchland and distant hills. The film begins as a Western but is set in 1925 Montana. Even more, it is a psychodrama pitting a vicious homophobe against a mild-mannered brother who, realizing he is getting along in years, makes an unexpected marital decision that will lead to a long simmering struggle ending in a surprising way.

Having inherited their sprawling ranch from distant parents, the brothers have grown their cattle and horse-training business so well that they were able to build a towering MacMansion-style ranch house filled with fine furniture, paintings, and rugs. Their just-beneath-the-surface hostility symbolized by an early shot of two cows butting heads, the brothers could not be more different in attitude and temperament. George, always wears a bow tie and suit. We never see him tending to the many physical ranch chores, so we assume that he manages the business side of the ranch.  Phil, the Marlboro Man or John Wayne on steroids, always wears soiled chaps and cowboy apparel, is foul talking, and apparently even more foul smelling, refusing to use the bathtub or shower. At one point George, when they are having guests, confronts his brother over the issue and is rebuffed. Phil reveres the memory of a deceased cowboy named Bronco Henry who had mentored him in the ranch business. In the barn he has built a shrine in his memory, centering on the man’s old saddle.

Early in the film we see Phil’s homophobia rise to the surface, along with his sadism. The crew has driven their cattle into town for market, and the hungry brothers and their dozen or so cowhands enter the dining room of the boarding house run by Rose (Kirsten Dunst). She is a widow because her doctor husband hung himself a few years back. Her rail-slender son Peter (Kodi Smit-McPhee) assists her by waiting on tables. Effeminate in looks and manner, he has skillfully crafted paper flowers, with which the tables are decorated. Phil talks to the boy scornfully and then spitefully sets one of the flowers on fire to light the cigarette he has rolled himself.

George does not intervene but apologizes to Rose. Their dining at the boarding house marks the beginning of his courting of the woman. Like my favorite Robert Duvall movie, Tender Mercies, the romance transpires off-screen, and almost before we know it, George is announcing to Phil that they are married. Upset that their hitherto masculine habitat is being invaded by, not one, but two feminine personages, Phil begins a psychological campaign to humiliate both mother and son. It works, with Rose resorting to drink and losing all sense of self-confidence. In one stark scene she practices a song on the piano George has bought her. The brothers’ elderly parents and the state governor are to visit them soon, so he wants to show off her skill. Even though she has played for the then silent movies, she cannot master the song—and above her playing we hear the same tune skillfully played on a banjo by Phil upstairs, clearly mocking her. The visit turns into a humiliating disaster.

Following Phil’s lead, the ranch hands also scorn and make fun of Peter during the summer when he returns from medical school. The boy is admittedly quirky. Catching a rabbit and giving it to his mother as a pet, he later kills and coolly dissects it to learn more about anatomy. Peter discovers Phil’s swimming hole, reachable only by crawling through a tunnel in the dense underbrush. While Phil is caking himself with mud and then washing himself in the stream, Peter comes upon a box hidden in the undergrowth. Opening it, he is surprised to find a stack of Physical Culture magazines, filled with full-page pictures of almost naked men. Thus we learn of the macho cowboy’s repressed nature. The young man gazes at several of them. When Phil becomes aware of Peter’s presence, he angrily yells to him to get out and chases after him.

One day, however, Phil tells Peter that he will teach him how to become a ranch hand. Reluctantly, the boy accepts. As Rose watches the two together, she slides more and more into drinking and mental instability. We wonder about Phil’s motives. Is this part of his plan to hurt Rose, and the boy too? How and when will he further humiliate the lad, once he has gained his trust? But this does not happen. Instead, he is drawn ever closer to Peter.  While the two are staring at the distant mountains, and Phil asks what does he see. Peter replies that he can see the light and the shadows forming a dog. The boy is the only one who has seen what Phil has seen. Throughout the film there have been shots of Phil gazing into the distance. One of the ranch hands wonders what the boss sees in the distant hills, So Peter’s seeing what Phil sees cements their bond. Phil has been braiding a rope from leather strands cut from the cowhides he has been collecting. He says that it will be for Peter when he has finished it.

During these happenings Rose has been in an alcohol-induced torpor, but one day when nearby Native Americans stop by and ask to buy them. she rises up in a rebellious act, trading the hides hanging on the corral fence for a luxurious pair of gloves She has heard Phil order his crew never to sell them to Indians, not even to let them on his property.

Phil runs out of cowhide before he can finish the rope. Peter tells him he has a hide which he can use. With this Phil finishes the rope and bestows it upon his protégé. Where Peter obtained that hide and what fate awaits Macho Man I leave to you to discover. I will say that I became aware of what Peter had been up to only when I saw the scene in which Peter pushes the coiled rope underneath his bed. Given the place that a dog had in the psalmist’s society, the film’s title takes on a delicious irony after this.

In her first film in many years, Jane Campion has given us a tale of vengeance far more subtle than any I have ever seen. The apostle Paul, as well as the author whom he quotes—the Deuteronomist (Dt. 32:35)—would not approve, but I have to admit, a part of me says, “Good for you, Peter.” Indeed, in a way, given Phil’s long-time malignant rule of the roost, I am tempted to see the ending as a vindication of Mary in her triumphant song in which she exults, “… He has brought down the powerful from their thrones,/and lifted up the lowly…” (Luke 1:52)

This review is in the December issue of VP along with a set of questions for reflection and/or discussion. If you have found reviews on this site helpful, please consider purchasing a subscription or individual issue in The Store

Phil, resenting his bother George getting married, vows to drive her & her effeminate son off their Montana ranch by driving her mad.
Editor Rating ★★★★★4.5 out of 5
More Details