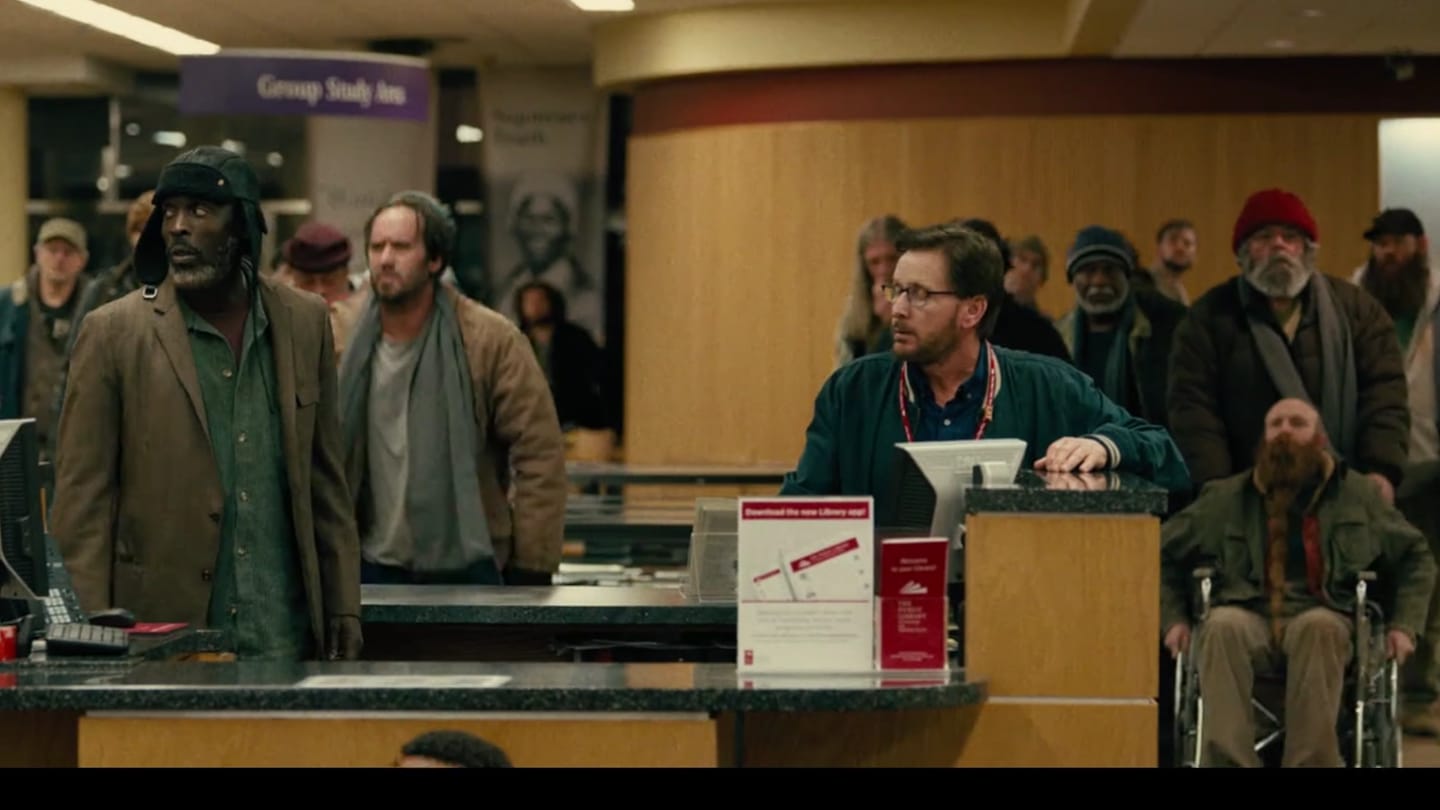 For the needy shall not always be forgotten,    nor the hope of the poor perish forever.

Director/writer Emilio Estevez has given us a delightful visual parable of justice and creative resistance to “the principalities and powers.” If you enjoyed his thoughtful films Bobby and The Way, you will appreciate this film dealing with issues of homelessness, media exploitation, and decision making under pressure. He also plays the lead, a mild-mannered librarian who becomes a an unlikely hero due to circumstances beyond his control. The film is far from being subtle, but it is nonetheless a worthy tool for those working for social justice. I also love this film because it is set in one of my favorite locales that is always fun to visit, the Cincinnati Public Library. For as long as I can remember, the large attractive main room has been festooned with the large wall posters of famous people we see in the film, one of them depicting Frederick Douglass. I am sure this prophet of the 19th century would approve of what transpires in this film.

From the beginning we become aware that the library staff has a good relationship with the homeless who gather around the main entrance each morning awaiting the  opening of the building. As librarian Stuart Goodson (Estevez) passes them, several greet him, “Good morning, Mr. Goodson.” They eagerly enter the library, some to wash up and brush their teeth in the rest rooms, and then to read a book (one is about “loneliness) or use the Internet. Stuart is in charge of the “Society” section on the 3rd floor, working with his staff Myra (Jena Malone) and Ernesto (Jacob Vargas). Myra is an environmentalist, ever worried about her footprint and Ernesto longs for the warmer climate of his native Mexico as an arctic cold spell settles over the city.

Stuart is so consumed by his library work that he has had little of a social life, but we see that might change in the rare scene that does not take place at the Library, his cold apartment building. Angela (Taylor Schilling), the building manager is hammering at a heating pipe when he comes home one night. They chat, she who has never visited the library saying that it must be nice to have a job that calls for him to sit and read books all day. He invites her to come down and see for herself, and she agrees to do so.

The next day continues to be frigid. It is so cold that another homeless man was found frozen to death near the library’s front door. Stuart and Ernesto also find themselves on the carpet when head librarian Anderson (Jeffrey Wright) informs them that a patron whom they had expelled is suing the library and that the board is considering settling for damages of $850 K. They explain that other patrons had complained of the man’s excessive body odor and when they had warned him and he still had not cleaned himself up, they had made him leave, but this has little impact on their boss’s negative opinion of them.

As the day progresses the news report is that the shelters are full. However, there is still a large group of the homeless at the library, mostly but not all men. Indeed the most cantankerous is a woman who talks back when told that the library is about to close at 6 P.M. Because the shelters are either full or too far to walk to, the homeless group spontaneously decide not to leave. The man who emerges as the group’s spokesman is Jackson (Michael K. Williams), who along with Suits (William Cross) is a veteran. The towering Big George (Rhymefest) is always around, but due to his mental illness remains silent. He will not even look at anyone because he believes that his laser-powered eyes caused the death of a man.

Stuart is uncertain what to do when Jackson informs him that us are staying the night. The librarian asks who “us” are, and they round a corner and he sees a group of almost a hundred standing mutely but resolutely. Myra is upset, soon revealing that her interest in social concerns stops at the discussion level. Stuart hesitates, worrying about the consequences, but then decides to consent. The men have already closed the door to his section and are holding it closed against the push of the security guards. Stuart asks Big George to move a massive book case over against the door, and slowly but surely, he does.

Soon the police are on hand, Detective Bill Ramstead (Alec Baldwin) serving as the negotiator. He has his own issue troubling his mind, that of finding his addicted son who has gone missing on the cold streets of the city. When he meets Stuart at the door—the latter has unwillingly become the spokesman when Jackson refuses the task—he gives him a picture of his son after he asks if the young man is in the group.

Also on hand is county prosecutor Josh Davis (Christian Slater), eager to participate because he is running for mayor. He needs some good publicity because his opponent is an African American pastor, popular due to his helping the poor over the years. However, Davis is taken aback because Stuart will not talk with him until he complies with one request. It is one that at first puzzles everybody: Davis removes his coat and lies down on the pavement in front of the library’s windows so all can see him. Stuart, for reasons that become known later, wants the man, in whom he can discern over the phone no trace of compassion, to know what it is like to have to lie down in the cold.

By now the media have arrived, so they capture the event—and we see a second meaning in the title, that it doesn’t just refer to the Library. There is a public out there about to become engaged. Chief among the those flocking to the Library is Rebecca Parks (Gabrielle Union), who proves to be a very ambitious TV reporter, quick to sensationalize the stand-off. Also joining the growing crowd is Angela who has come down as promised. She has the funniest line in the film. Unable to get through the police line, she phones Stuart, asking, “So now is probably not a great time to come and get my library card?” Though mention should be made of some of the crazy questions that a gaggle of patrons have asked at the Information desk, such as the patron who wants to take out a book he has returned but can identify it only by its color (red) and that it was on a top shelf.

Detective Ramstead keeps calm and tries to contain the emotions of all concerned as he talks at times with Stuart and Jackson. Josh Davis and Rebecca Parks are certain that this is a hostage situation. The chief of police arrives and also tries to keep a lid on matters. Head librarian Anderson, upset at first with Stuart, whom he has told is being terminated because of the lawsuit, decides to switch sides, the besieged letting him in by a side door. At first opposed to allowing the homeless to bed down for the night, he says during one discussion, “The public library is the last bastion of democracy that we have in this country!” (What a recruitment film this ought to make for the American Library Association! Holy smokes, I just read on the ALA website that this week, April 7-13, is National Library Week!)

A bus pulls up loaded with police in full riot gear, including those ominous looking shields, so everyone braces for the confrontation sure to come. Rebecca, who has spread the false tale, even as she spoke over Angela’s phone with Stuart, that this is a hostage situation (because by now she is feeding her story nationwide), is eager to film the showdown. In his phone interview Stuart finds some words on the back jacket of Grapes of Wrath to answer her with, though she is unaware that he is quoting from a book blurb that speaks of the people’s “growing wrath.”.

Inside Stuart has risen to take charge of the crisis. He has calmed down Big George by giving the man his eye glasses, telling him that they will not allow his deadly laser rays to harm anyone. He has dealt with his dark past dredged up by the media that he had been in prison years ago. Anderson confirms this with Det. Ramstead, saying that he had hired him knowing of this because he thought he deserved a second chance. Earlier Stuart had said that books and reading saved his life, which had led him to become a librarian. Thanks to Stuart, what could have become a deadly climax turns into a song-fest with the homeless standing as the police break in. The group is singing a song that one of them had sung in the afternoon while in an unusual state, “I Can See Clearly Now.” The cops are completely disarmed by the status of the men—you will be joining in the laughter when you see them, so unexpected is their condition. What a wonderful, Gandhi-like anti-climax!

This is a film to discuss and cherish, for me one of the best of the year. However, do not promote the film as being about the homeless (for that The Saint of Fort Washington is still the best), as some critics apparently assumed, and thus faulted the film because it does not go into the background of the homeless characters. At heart it is a tale of a flawed man rising to the occasion, one calling for calm and creative leadership—and we should also add, compassion. The film does affirm the worth of the street people, the librarians, despite occasional run-ins with them, treating them with respect. How one of the men disregards himself (was it Jackson?) is well summed up in his statement, “I don’t have anything that anybody has or that anybody  wants.”

Do not miss this film! I wish it could go mainstream so that more people could learn about it. Hey, ALA, and all the rest of the library organizations out there—how about showing this film at one of your many monthly events?

When homeless people at an urban library refuse to leave because it is so cold & shelters are full, a librarian is faced with opposing or siding with them.
Editor Rating ★★★★★4.5 out of 5
More Details