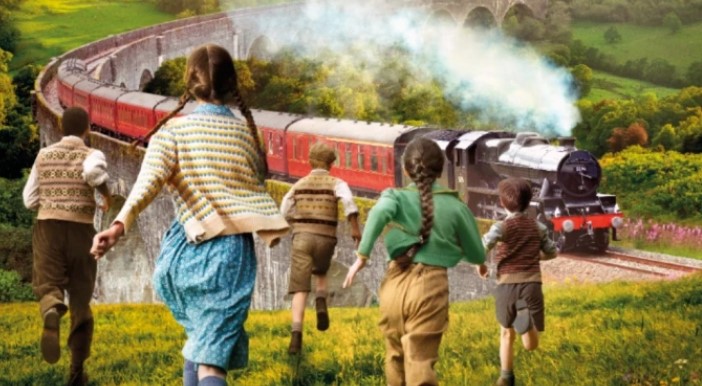 Contribute to the needs of the saints; pursue hospitality to strangers.

Director Morgan Matthews’ remake of E. Nesbit’s 1905 classic children’s novel and the 1970 film based on it updates the plot from Edwardian times to  1944 when the Brits are evacuating their children from their cities to save them from Nazi bombing. Screenwriter Daniel Brocklehurst, using a treatment by producer Jemma Rodgers, adds a note of social justice by the introduction of a new character, an African American G.I. hiding out in an abandoned rail car.

The story commences at the Manchester train station where hordes of parents and children are tearfully saying Goodbye to each other. Teenage Lily (Beau Gadsdon), her sister Pattie (Eden Hamilton) and brother Ted (Zac Cudby) board a train out of Salford and headed towards the safer Yorkshire countryside. Arriving at the village of  Oakworth station, they join the crowd of tagged children where the locals look them over while deciding whom to choose. Being three and not wanting to be separated, they are among the last to be chosen.

Bobbie ((Jenny Agutter)—she has played different roles in the 1970 and TV adaptations of the book) insists on taking them back to live with her daughter, Annie (Sheridan Smith), and her grandson, Thomas (Austin Haynes) is a kindly grandmother who has brought her schoolteacher daughter Annie (Sheridan Smith) and grandson, Thomas (Austin Haynes) to the station. She has held back during the selection, but when she sees that no one has agreed to house the trio, she convinces her reluctant daughter to take them in. As they all become acquainted young Thomas bonds with the guests, and soon the four of them are being led by him in play around the neighborhood and the train yard. The gatherings around the family table are warm, with the great actor Tom Courtenay dropping in as Bobbie’s brother-in-law, Uncle Walter, whose impersonation of PM Churchill is a delight.

It is while the four children are playing Hide-and-Seek in the train yard that Lily stumbles across an African American named Abe (Kenneth Aikens). Afraid of him at first, he convinces her that he is not an enemy but an American G.I. hiding out from white American G.I.s intent on doing him harm. The rest of the film revolves around the children hiding and feeding the fugitive, once Lily convinces them not to notify the authorities. Abe at first misleads the children, but finally his whole story is revealed, parts of which we see in scenes in which African American G.I.s are enjoying a night out in an English pub where they are treated as equals by the English. Then club-wielding American G.I.s rush in, wounding Abe, but failing to capture him when he runs away. He also reveals that he is just 14 years-old, having enlisted because he wanted to follow his older brother in service.

The children keep their activities secret from the adults, even though the latter are sympathetic. It takes a series of heroic acts to settle matters after Lily and Abe are captured and put aboard a train. I did not find the conclusion, involving the intervention of an American Army Colonel (who is Black), very credible, but I think young viewers will be satisfied. This is a family film, one that paints the Brits as entirely free of racism—not completely true—but is worth watching, certainly providing plenty of thrills and touches of humor that should capture the attention of young viewers. Adults should be prepared to explain how African Americans during WW 2 were discriminated against and how many of them did experience better treatment overseas from the British and the French.

British children sent to a small town during the Nazi Blitz join with a local boy to help a Black G.I. persecuted by racist MPs,
Editor Rating ★★★★★4 out of 5
More Details