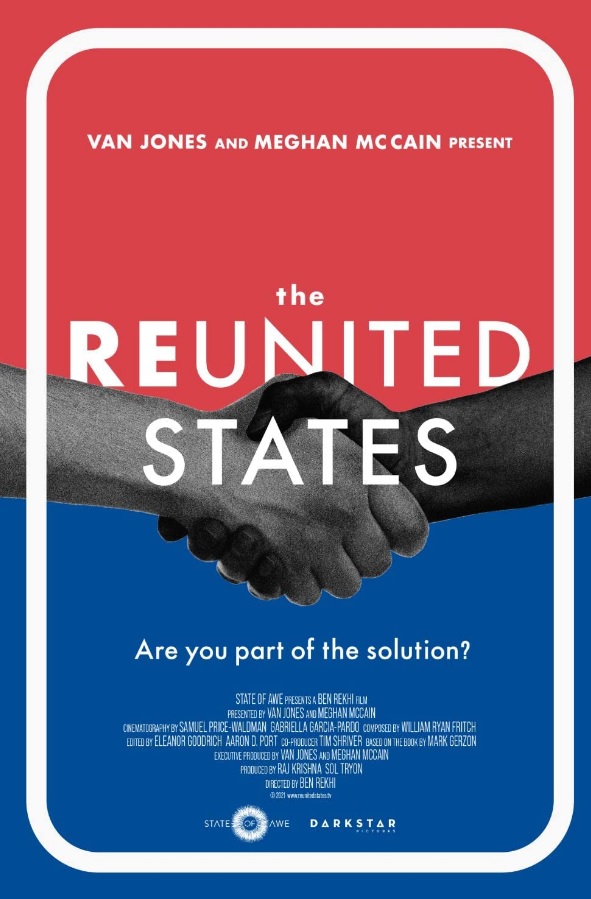 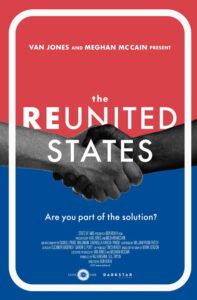 Director Ben Rekhi’s irenic documentary, based on on Mark Gerzon’s nonfiction book The Reunited States of America: How We Can Bridge the Partisan Divide is in itself a hopeful sign at a time of so much strife and despair. Its backers are an example of the coming together it pleads for–executive producers Van Jones and Meghan McCain are themselves far apart politically—the first being an ardent Democrat and the second being one of the most famous Republicans in Congress.

We meet some interesting people, such as  David Leaverton, once  Republican operative castigating the left and engaging in political tricks to win elections. He became disturbed at the results, and he and his wife Erin decided to sell their house, move with their three children into an RV, and tour the country to meet with people on both sides of the political divide. It is encouraging to see Erin listening to an African American woman deprived of proper health care because of her race, the two of them embracing after her testimony.

Another of those whom they engage with is Susan Bro, whose daughter Heather Heyer was killed by a car driven by a racist into the crowd protesting against the Neo-Nazi demonstrations in Charlottesville in 2016. The mother has decided to adopt and carry on her daughter’s fight for equal rights and justice. It is a moving moment when Mrs. Bro admits she had at first did not want to meet the Leavertons. She had felt that it was politicos like him that contributed to the build up of the nationwide rage that had led to Heather’s murder.

We also meet Greg Orman, an gubernatorial candidate in Kansas running on an independent label. He is eager to break the two-party system by showing there is an alternative to the current deadlock.

Another unsung but important leader we meet is Steven Oikara, the son of Indian immigrants. He founded the Millennial Action Project, the purpose of which is to bring together lawmakers on both sides who believe in bi-partisanship. When you see how Congress these past few decades has been strictly split along party lines, too often leading to deadlock, you can see how important his orginization is in espousing political compromise.

Director Ben Rekhi ties to walk a tightrope to maintain a non-partisan balance in his film. This means sometimes not going into the details of situations and issues, and this has been criticized by some critics. However, this is probably necessary so as not to turn off either side—yes, I think this would be a good film for you to watch with a former friend or family member with whom you strongly disagree. We may never agree with one another on political and social issues, but perhaps we could agree to stop demonizing each other and try to listen, which is basically the message of the film. The people you meet in the film are good role models for what the filmmakers are advocating.

A once far right republican family upset over our nation's divisiveness takes to the road to talk with people on how to reunite the country.
Editor Rating ★★★★★4 out of 5
More Details