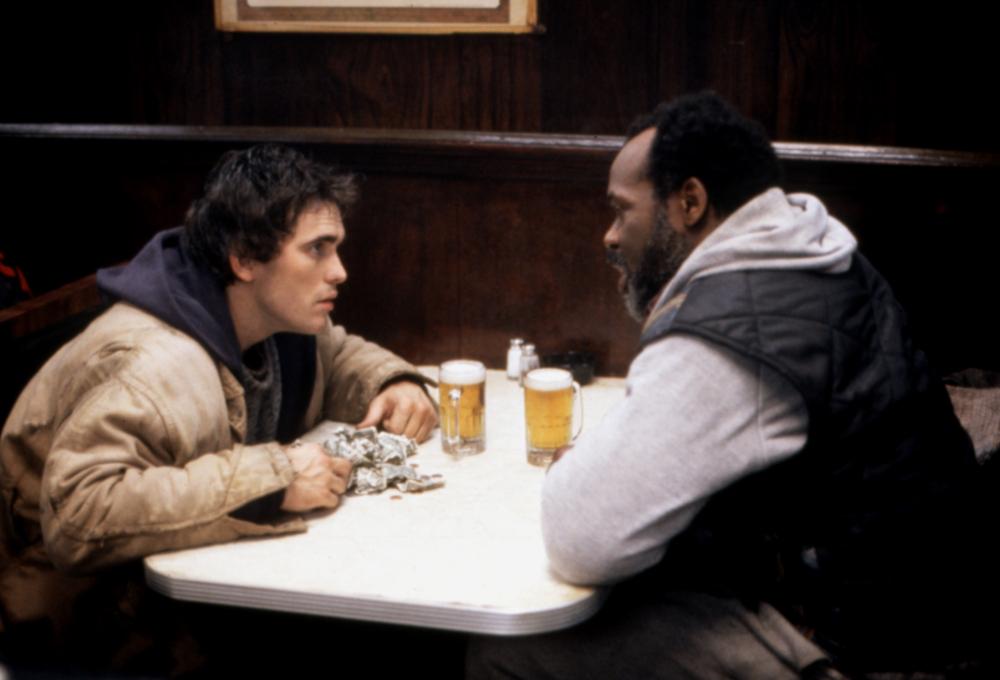 Reprinted from the September 1994 VP. I am posting this to go along with my review of a more recent DVD about the homeless Hidden in Plain sight.

And Jesus said to him, “Foxes have holes, and birds of the air have nests; but the Son of man has nowhere to lay his head.”

NOTE TO READERS—If you like this movie—and have Amazon’s Prime service—the movie is streaming free of charge  in early 2019. Amazon’s movie list is constantly changing, so enjoy the movie soon while it’s easily available. Here’s my review …

Director Tim Hunter’s “The Saint of Fort Washington” is the most powerful and moving dramatization of the plight of the homeless that I have seen. Starring Danny Glover and Matt Dillon as two down-and-out New Yorkers, the film brings out their humanity, and, in the case of one of them, even “saintliness.” The latter is handled well, not in the mawkishly sentimental way in which so many 1940’s films treated the poor, but in a straightforward manner. The studio or distributor apparently decided not to release it to theaters at the end of 1993 because the film has no Hollywood “happy ending. Fortunately it is now available on videocassette at libraries and video stores.

Jerry (Danny Glover) and Matthew (Matt Dillon) meet while waiting in line to get into Fort Washington, the huge armory in the Bronx that has been converted into a shelter for homeless men. The scene in which the camera reveals the vast sea of seven hundred beds arrayed on the floor forcefully drives home what a large problem this is. The developing father son relationship between Jerry and Matthew show us some of the personal, emotional aspects of what it means to be homeless.

The buoyant spirit of Jerry helps instill in Matt, who has been mentally damaged, a desire to rise above mere survival. It is Jerry who recognizes in his deranged friend the saintliness” of his companion and, in a spiritual, moving scene uses rainwater to anoint him “The Saint of Fort Washington.”  And later, when problems are about to drown Jerry’s spirit, it is Matt who pulls him onto higher ground. The ultimate tragic fate of one of the two is sobering, and yet I was left not with a feeling of de­spair, but rather of quiet appreciation of having watched so many beautiful moments in such an ugly environment. The film is a celebration of the tenacity of the human spirit, and of the possibility of sainthood arising in unlikely circumstances.

Issues of survival on the streets and in a shelter, coping with the bureaucracy (our equivalent to St. Paul’s “principali­ties and powers?) violence in the shelters, difficulties in making a living, and more guarantee that a church viewing group will not only be touched by a good story well told, but might emerge with a greater concern for those persons many in America would prefer either to ignore or to blame for their plight.

This review, with a set of questions,  also is included in my book Films & Faith: Forty Discussion Guides, available from my Ohio VP office.

When a teenager with a slight mental problem is forced into the streets of NYC he is befriended by a black man who knows the ropes.
Editor Rating ★★★★★5 out of 5
More Details