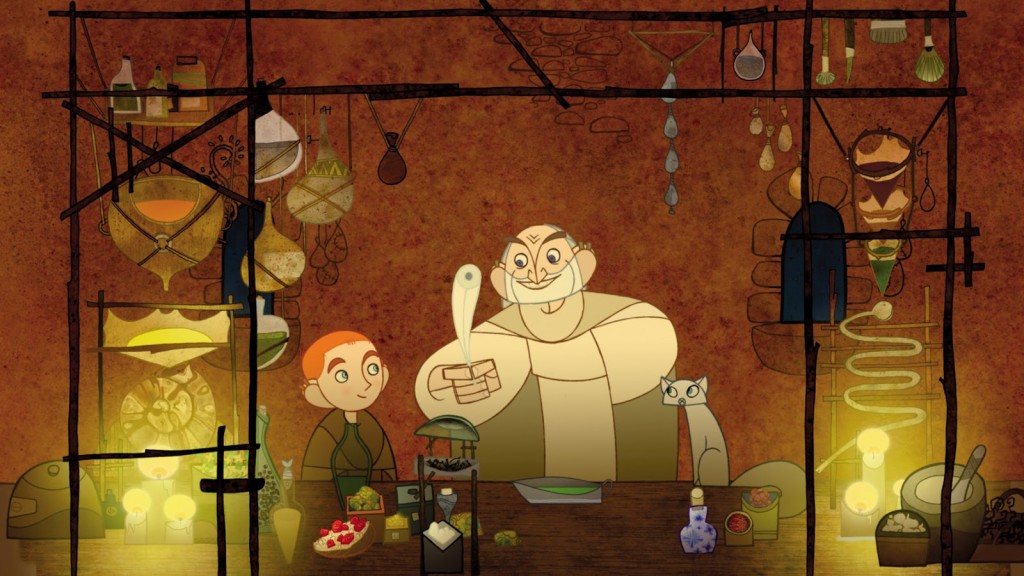 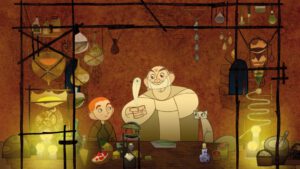 If ever “steadfast love and faithfulness” met on this earth it must have been in the monasteries of Ireland during the dark days of the Viking devastations.  Amidst the ever-present threat of barbarian destruction these monks kept alive a dedication to preserving the wisdom of the old civilization in general, and of the written account of the four Gospels in particular. Combining myth, legend, and history co-directors Tomm Moore and Nora Twomey have gifted us with a beautiful animated film that purportedly tells the story of the creation of one of the glories of early medieval manuscripts, The Book of Kells.

Actually, we probably should say, this is the story of the finishing of the great book. Our story begins by introducing us to 12-year-old Brendan (voiced by Evan McGuire), an orphaned boy-monk watched over by his stern uncle, Abbot Cellach (Brendan Gleeson). These two come to represent two ways of dealing with the world—the Abbot, fearing the Vikings, obsesses with building high and strong the wall of their abbey, thus shutting the world out, whereas Brendan is eager to embrace and explore the outside world. Tension between them mounts with the coming of old Brother Aidan (Mick Lally), seeking refuge when the Vikings had attacked and destroyed the great monastery at Iona, once the greatest center of learning in Christendom. Brother Aiden brings with him the unfinished manuscript of the four Gospels and the secrets of making ink. Prompted by the old monk, Brendan, against the express orders of the Abbot, ventures into the forest to seek the berries that will produce ink of a vibrant green color.

In the forest he meets a mysterious sprite or fairy named Aisling (Christen Mooney). At first upset at his intrusion into her domain, she befriends him and conducts him high into the trees where he can gather the berries needed. When Brendan returns with his find, his angry uncle locks him in the high tower of the monastery, but this is only for a spell. Eventually the lad and Aidan are united again, and when the old monk sees that Brendan possesses the skills important for writing and illuminating the text, the two work hard on the work. Much happens, including the arrival of the dreaded Vikings, but I do not think it is spoiling matters to report that the manuscript survives.

The animators have taken their cues from the Book of Kells itself, many of the scenes decorated in the intertwining vine motifs. Also, as I discovered while reading up on the subject, the inclusion of the cat that becomes Brendan’s faithful companion is not just a matter of the animators’ whimsy: the Irish illuminators enjoyed incorporating all kinds of animals into their decorations and pictures, but they were especially fond of cats. If ever there is proof that the art of hand-drawn animation can produce a work as effective as the newer computer-generated, 3-D enhanced extravaganzas, this gorgeous film is it. 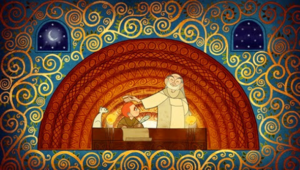 1. Compare Abbot Cellach and Brendan’s way of dealing with the outside world Are they of fear versus faith? How is much of what is called Fundamentalism similar to the Abbot’s way? That is, how do some fearful Christians today seek to build high walls in order to shut out the world and its perceived dangers?

2. Do you think that has fear resulted in the spoliation of both the Christian and the Muslim faiths, and if so, how?

4. In the scene in which he passes on the Book to Brendan compare Brother Aiden’s concern with preserving the Book because it engenders hope with that of the book bearer in the film The Book of Eli. How is the condition of the world essentially the same in both films?

5. What do you make of the white wolf in the story; or, what role does it play?

6. If this film whets your appetite for learning more about the subject, Google “The Book of Kells” to find a wealth of information. (Also, as a bit of trivia for you film lovers, note that the Psalms passage is the one used several times in the film Babette’s Feast.)