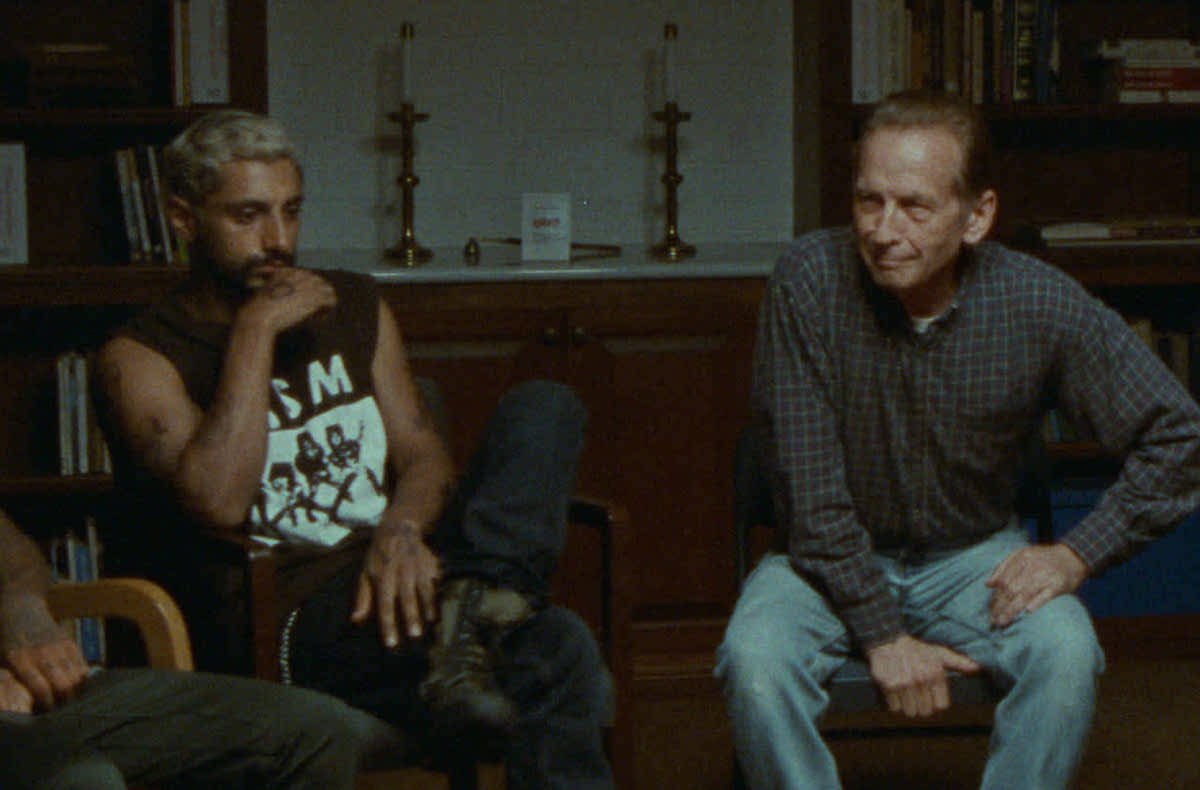 “Be still, and know that I am God!


Learn to get in touch with the silence within yourself, and know that everything in life has purpose. There are no mistakes, no coincidences, all events are blessings given to us to learn from.

Deserving of it’s “Best Picture” Oscar nomination, this is an immersive film centering on a musician going deaf. Director Darius Marder has teamed with Abraham Marde to produce a script that describes the journey of a recovering drug addict who resists accepting his fate until his plan to return to “normal” proves futile and he must decide what direction his life will take. Riz Ahmed as the heavy metal drummer Ruben and Olivia Cooke as his bandmate, singer, and lover Lou are superb, as is the sound design (one of the film’s six Oscar nominations) that enables us to hear/not hear from the perspective of Ruben.

The film opens with the duo, named “Blackgammon,” engaged in a concert with Ruben hearing only a distortion of lead singer Lou’s voice and guitar chords. The sounds are loud but indistinct so that Rubin is barely able to come in on his cues. Seeking medical advice, the examining doctor informs him he has lost most of his hearing and that he should stop playing in the band lest he lose the remainder. There is a slight chance to improve his hearing with a cochlear implant. It is terribly expensive, and his insurance will not pay for it.

Ruben does not tell Lou about his problem, but during their next gig he is unable to finish a number, and so has to reveal his problem to her. She wants to cut their tour. He resists, even breaking out in rage over his unjust fate, but eventually agrees to visit a rural community of the deaf recommended to him by their agent. Its headed by an older man named Joe (Paul Raci) who lost his hearing to a bomb blast in the Vietnam War. If Ruben stays, Joe informs him, a church will pay his expenses. Ruben responds that he is not religious, to which Joe says neither is he. More of a problem for Ruben is the stipulation that he break off all communication with the outside world. Not agreeing to such a drastic move, Ruben drives off with Lou in their RV.

The lovers argue, Ruben concerned at first only with getting the cochlear implant. Eventually, he does return to the community because his condition has deteriorated so much. Joe tells him, “You should understand that, uh, this is a Deaf community, not just my program, but we’re part of a larger Deaf community, and my program and the people in it, they benefit tremendously from that Deaf community. We work with them, and they work with us. But, it’s very important, if you want to be here, to understand we’re looking for a solution to, to this (pointing at forehead), not this (pointing at ears). Ruben agrees but does not reveal that he still wants an implant. Deep down he rejects Joe’s philosophy that deafness is not something one has to “fix.”.

Over the weeks Ruben joins with the other residents, most of whom also had suffered as addicts of alcohol and other drugs. He begins to learn the American Sighn Language that everyone else is so adept at. A couple of times he sneaks into Joe’s office to find out via the computer what Lou is up to now that she is on her own. At a nearby deaf children’s school he participates in their activities, discovering he has a gift for relating to children. Joe instructs him to spend a large part of the day alone in a room writing whatever comes into his mind. His mentor says he will be doing the same. Ruben chafes at this “learning how to be deaf,” but does so. At school he becomes a much loved figure, the children thrilling to his impromptu drum lessons because they can feel the vibrations through their fingers. They also “listen” together to a piano in this manner.

I don’t recall when, but at some point during this Joe discusses their exercise of being alone in silence. His observation seems to have much in common with Quakers, “I wonder, uh, all these mornings you’ve been sitting in my study, sitting, have you had any moments of stillness? Because you’re right, Ruben. The world does keep moving, and it can be a damn cruel place. But for me, those moments of stillness, that place, that’s the kingdom of God.”

Ruben has established himself as such a beloved mentor to the children that Joe offers him a way to stay with the community beyond the period for which the church has paid. He sees in Ruben the successor that will be needed when he himself grows too old to serve. Ruben replies that he will think about this. What he does is to visit his RV, strip its sound board and drums, and sell them. He even makes a deal to sell the RV with the firm stipulation that within eight weeks he can buy it back at the same price plus interest. He takes leave of the community and undergoes the operation but will not know the results for several weeks.

There follows in quick succession his return to the deaf community and his confrontation with Joe, the activation of his cochlear implant, a journey to Paris where Lou is temporarily bunking with her father Richard (Mathieu Amalric), and a facing up to his predicament. The last shot of him in a park features a masterful performance by actor Riz Ahmed that communicates that he at last is realizing what Joe has been attempting to convey to him.

We do not know the details of his future life, but we rejoice that though he may be deaf, he sees far more deeply than ever. Maybe at that moment Jesus might say to him, “You are not far from the kingdom of God.” Maybe now he can wrestle with the disturbing words of Elisabeth Kubler-Ross that align with what Joe had tried to teach him, “Learn to get in touch with the silence within yourself and know that everything in life has purpose. There are no mistakes, no coincidences, all events are blessings given to us to learn from.”

When heavy metal drummer Ruben faces deafness he must choose between fixing his problem or accepting a place in a deaf community.
Editor Rating ★★★★★4.5 out of 5