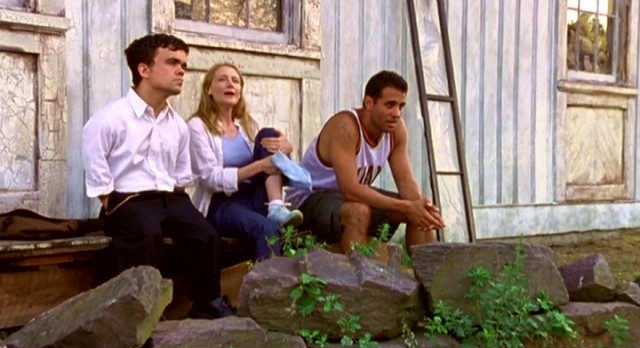 This fine film reviewed in the November 2003 issue of VP is being brought up from the archives because its star Peter Dinklage is the improbable star of Cyrano, reviewed elsewhere in this journal. This was the first time I had seen him on the screen, but thankfully, not the last time.

A friend loves at all times,


Two are better than one, because they have a good reward for their toil. For if they fall, one will lift up the other; but woe to one who is alone and falls and does not have another to help. Again, if two lie together, they keep warm; but how can one keep warm alone? And though one might prevail against another, two will withstand one. A threefold cord is not quickly broken.

The size of  Finbar McBride (Peter Dinklage), a dwarf,  makes him one of the most unusual outsiders to come along since diminutive Billy Kwan, the brooding press photographer in The Year of Living Dangerously. “Fin,” as he calls himself, is a dwarf–“Not a midget!” he is quick to correct anyone who calls him that. He stands a little over four feet in height, perpetually overlooked by clerks at counters. Years of being the object of impolite stares and the butt of demeaning jokes have caused him to withdraw into himself. He has found his niche in Hoboken, New Jersey at the small model railroad shop where he repairs trains even smaller in scale than himself, no doubt his small fingers being an asset in this exacting work. Through the years he apparently has become far more than just an employee of the elderly owner.

Fin is taken aback when his friend suddenly keels over and dies of a heart attack. The business abruptly ends, but his friend has provided for Fin. He has willed him the deed to an abandoned railroad depot out in the wilds of rural New Jersey. Thus Fin becomes the station agent of the title when he leaves the city and moves into the dusty old building. His first night bunking down seems to be an enjoyable time for him, with peace and solitude, far from the curious crowds of the city.

His solitude is threatened the next morning when Fin looks out and sees a man opening up a roadside hot dog stand. His daytime neighbor is the loquacious Joe Oramas  (Bobby Cannavale), filling in for his sick father. Joe is curious, but the taciturn Fin barely acknowledges his greetings and queries at first. But he is also a forgiving man, so he takes no offense at Fin;s curt responses. The second person Fin meets is almost the last. He is taking one of the long walks he so enjoys when a car driven by Olivia Harris (Patricia Clarkson) almost runs him down. Olivia is distracted, taking her eyes off the road, and Finn barely is able to jump out of her way. She stops and apologizes, Finn also barely replying and turning down her offer of a ride into town. In town she almost runs over him again when she is behind the wheel and spills her cup of coffee. Clearly this is a lady who could benefit from a course in safe driving!

Two more people enter Fin’s life. Cleo is a black girl, about Fin’s size, who is even shyer than he. While Fin is walking along the train tracks, the girl follows at a distance. Fin tries to speak to her, but she runs away. Later, the curious girl shows up at the station where she is intrigued by the old passenger car parked on the siding, along with an old caboose. She tells Fin that her name is Cleo. As they become friends, Fin becomes the shy one, at first turning down her request to speak to her school class. Joe begins to accompany his new friend on the long walks to the spot where Finn loves to sit quietly and then film the passing train.

The fourth person Fin meets is the young woman in charge of the library. Emily (Michelle Williams) has to inform him that she cannot give him a card until he obtains an I.D. with a local address. She is drawn to him, eventually giving him a movie camera so that he can film the trains that pass by the town. Fin’s long walks into the countryside are no longer solitary affairs, Joe often joining him.

So does Olivia, though this woman with a troubled past that suddenly seems overwhelming to her, breaks off contact for a while. Whereas Fin once would have walked away, he now seeks to find out what is wrong and how he can help. He is a man who has made the long journey from the loneliness of rejection to the warm joys of companionship. There is one delightful scene in which the three main characters share a meal that could be seen as a foretaste of  Jesus’ promise in Luke 13:29, “And men will come from east and west, and from north and south, and sit at table in the kingdom of God.”

A dwarf, reclusive because of his size, finds friendship & love when he becomes the station agent at a small New Jersey town.
Editor Rating ★★★★★5 out of 5
More Details