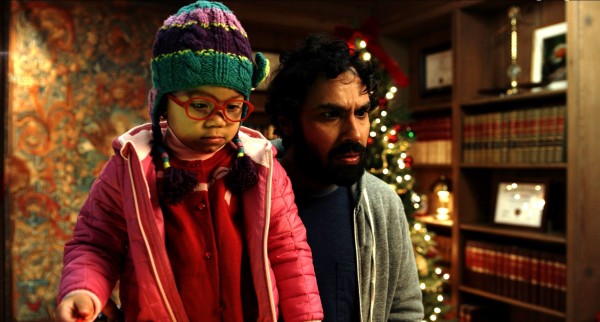 Director Hans Canosa’s film set in a charming island village should warm the hearts of romantics, especially those who love books. Based on a New York Times best seller, the book’s author Gabrielle Zevin also wrote the screenplay. I became completely engrossed in it—well, drawn in, finding its tale of an orphaned girl raised by a lonely bookstore owner enjoyable, but engrossing says too much, because I could not quite shake the sense of the story’s artificiality. And yet, having been a lover (and haunter of) bookstores since my grade school days, I fell in love with this film.

Indonesian American A.J. Fikry (Kunal Nayyar) runs a bookstore on the fictional Alice Island, a ferryboat ride from cape Cod.  I would revel in exploring it, but he himself is far from amiable, rebuffing the eager Amelia (Lucy Hale), a sales rep who lives far away in Providence, Rhode Island when she pays a visit to his store to interest him in new publications. We wonder how they will ever come together—but after all, isn’t it a romantic trope that when Boy dislikes Girl at first, it means they must be destined to find each other?

A.J. has turned to alcohol to help him deal with the sorrow over the tragic death of his wife a couple of years before. Two events bring him out of his alcoholic doldrum. His slim first edition of Edgar Allen Poe’s Tamerlane is stolen, and a mixed race toddler named Maya is left in his store. It will take several years before we learn the secret of these mysteries. In the meantime, the local cop Lambiase (David Arquette) called in to investigate becomes a supportive best friend, and that sales rep will return to the island again and again, until… There is also a local novelist residing on the island Daniel Parish (Scott Foley). A.J.’s sister-in-law, Ismay (Christina Hendricks) and her husband, Daniel (Scott Foley), will help him to raise the girl. We will encounter Maya at three stage–at, age two played by Charlotte Thanh Theresin; at age six by Jordyn McIntosh, and as a teenager Blaire Brown. All are delightful, with the teenager aspiring to be a writer.

Who stole the book and why, as well as who left the baby and why, and how they are related, we will learn as the film unfolds. There will be a suicide and another death, so the film contains plenty of sorrow—keep that handkerchief close by.

As a book lover I thoroughly enjoyed this heart-tugger. It is a good film for families with middle school children with characters one comes to appreciate as they meet the challenges hurled their way.

A still grieving bookstore owner's life is changed when he becomes the ward of an abandoned girl just after a prized book is stolen.
Editor Rating ★★★★★4 out of 5
More Details