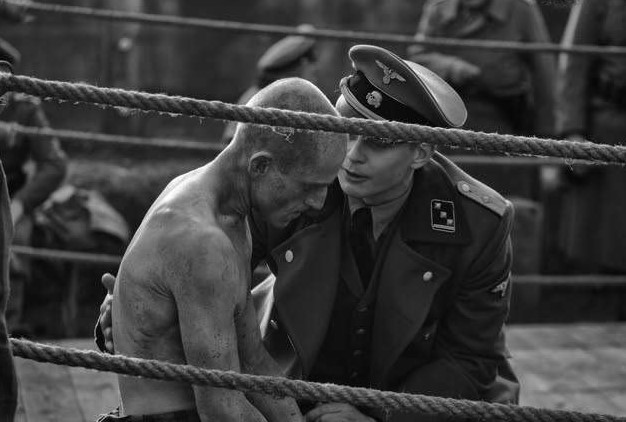 Why do you hide your face? Why do you forget our affliction and oppression?


If the Lord of hosts had not left us a few survivors, we would have been like Sodom and become like Gomorrah.

“Life is never made unbearable by circumstances, but only by lack of meaning and purpose.”

Just when you think you have seen every variation of a Holocaust story, along comes another that adds a new bit of knowledge and horror at how cruel a human can be and how strong is the will to survive—such is this film, based on the book Harry Haft, written by his oldest son Alan Scott Haft. The son co-wrote the film script with Justine Juel Gillmer, and is directed by one of my favorite directors Barry Levinson, the result being an a powerful story of star-crossed love, guilt and the will to survive in a setting so barbaric that it is still difficult to believe.

-in 1949 Haft is a Coney Island based boxer billed as “the pride of Poland and the survivor of Auschwitz.” However, recently he has lost more fights than he has won, yet he persists in his quest for a bout with the rising star Rocky Marciano. As unlikely as this seems, he perseveres until he pulls it off. The reason for his persistence is that he hopes the publicity will help him reconnect with the woman he had loved back in Poland, Leah (Dar Zuzovsky). These scenes are shot in grainy color.

-In Poland the lovers Leah and Hertzko Heft (Harry’s Polish name) are both arrested because they are Jews and sent to Auschwitz where they are separated. We see Hertzko ‘s fate and learn of Lea’s only later after the war when Harry searches for her by means of a Jewish refugee agency in New York. In Auschwitz in 1943, Hertzko tries to protect a fellow prisoner who is upset because his wife has died. The guard starts to shoot him but Harry intervenes, pummeling the German he has knocked down. Harry would have been shot but for the intervention of a Nazi officer named Schneider (Billy Magnussen), a schemer who sees a way of making money off the prisoner. He orders him to fight another prisoner—the victor will live to fight another day, and the loser will be shot on the spot—this Harry learns to his shock only after he defeats his first opponent. All this for the amusement of the sadistic Nazi officers, most of whom bet on the outcome. The concentration camp scenes are shot in high definition black and white.

Naturally, Hertzko is not popular with fellow prisoners, though he does have one long-time friend whom he tries to protect. After the war, when determined reporter Emory Anderson (Peter Sarsgaard) tells Harry’s story, the latter is ostracized by some members of his community. Some do understand that while Harry made a deal with the devil, it might have been a deal God would have understood—the most supportive of these is Miriam Wofsoniker (Vicky Kriep), the staff member of the Jewish refugee society who becomes very involved in his search for the whereabouts of Leah. At first a sympathetic searcher who does bring him the news that Leah did indeed survive the War, their relationship deepens when he takes her for a cup of coffee and then to the movies. It will be years before Harry learns where Leah lives, which takes us back to that Georgia seaside where the now elderly Harry has brought his family without revealing to Miriam his real reason for vacationing there.

The penultimate scene between Harry and the also long-married Leah is masterfully played with a minimum amount of sentimentalism or dialogue. It is totally satisfying, with Leah’s words about how and why she was able to survive rather than giving in to despair would be approved by a more famous Holocaust survivor, Viktor Frankl.

Ben Foster is receiving actor Kudos for his dedication to the role—he lost over 60 lbs. in order to look like a half-starved death camp inmate—and he definitely deserves them. Probably the event that haunts Harry the most, as we learn late in the film, involves Hertzko and the old friend from back home when they are forced to fight each other. The actor conveys well by his eyes and facial expression the shock and horror of their situation.

But also adding greatly to the impact of the film are those in lesser roles, Vicky Kriep as the concerned agency staff member Miriam, and Dar Zuzovsky as the lost lover Leah. Both actresses make the most of their limited roles, as do Billy Magnussen as the evil Nazi office Schneider and Peter Sarsgaard as the America journalist Emory Anderson. There is even Danny DeVito who brings a much needed light touch to the otherwise dark proceedings. He plays Charley Goldman, a Jewish trainer of Rocky Marciano who is sympathetic because of Harry’s death camp story and does not want to see him totally humiliated when he steps into the ring with the far superior Marciano. He sneaks away to spend three days trying to get Harry to forget all his bad habits gained from his amateur career. The fight sequence late in the film subverts the usual sports tale of the underdog coming from behind.

The only other Holocaust film in which survivor’s guilt is a major theme is the far darker 2001 film directed by Tim Nelson Blake, The Grey Zone. Compared to that grim film, also based on a true story, this one is like Mary Popkins.—well álmost, the black and white death camp scenes are very harrowing, but the two lovers’ survival and their inspirational last meeting impressed this viewer, and hopefully will stay longer in my memory, than those earlier one. Love and tenderness, and the healing they bring to the pysche, trump hatred and cruelty.

True story of Jewish death camp survivor who fought boxing matches for Nazi's amusement, and his post war search for his lover.
Editor Rating ★★★★★4.5 out of 5
More Details