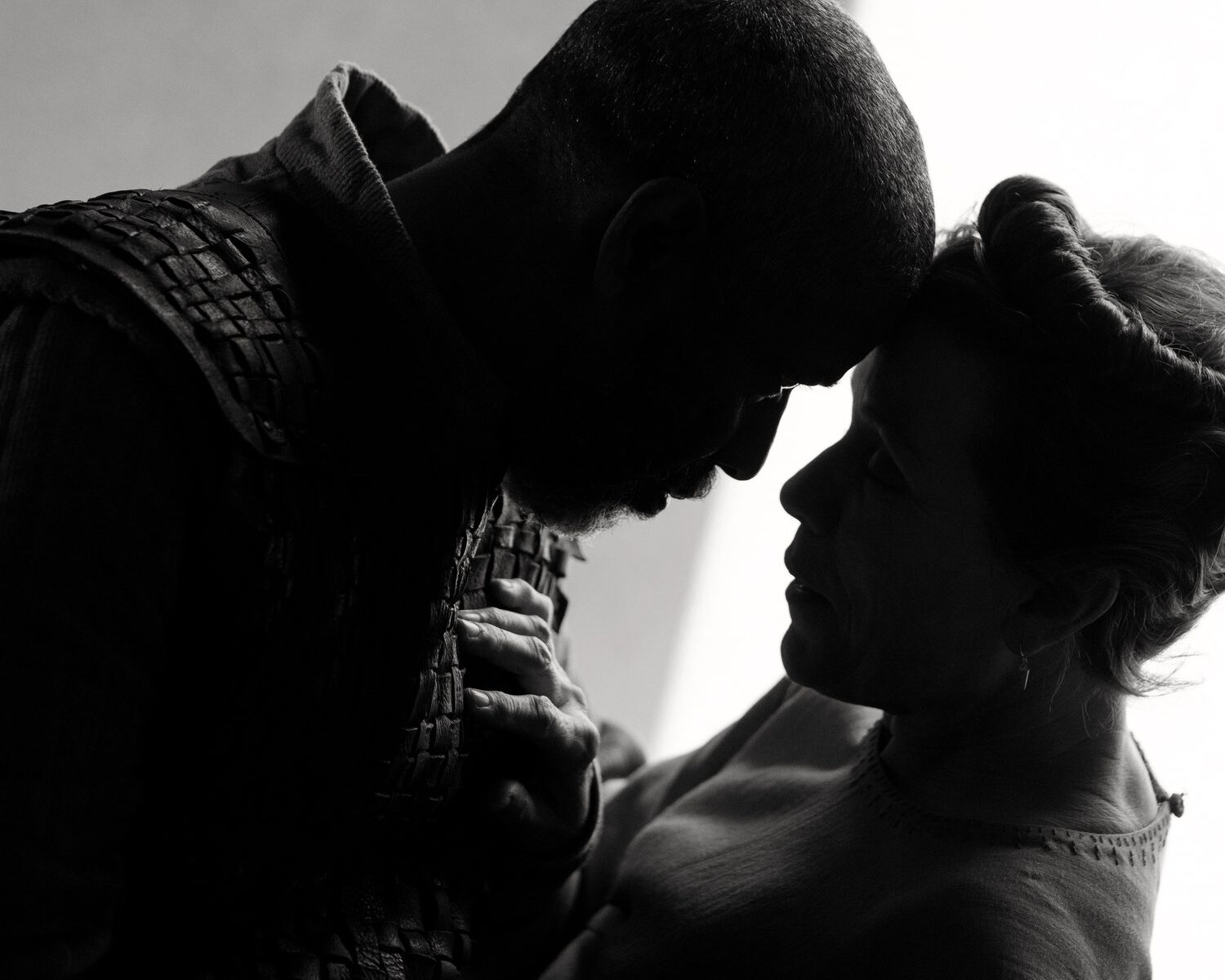 Again, the devil took him to a very high mountain and showed him all the kingdoms of the world and their splendor; and he said to him, “All these I will give you, if you will fall down and worship me.” Jesus said to him, “Away with you, Satan! for it is written,
‘Worship the Lord your God,
and serve only him.’”


The words of the Teacher, the son of David, king in Jerusalem.
Vanity of vanities, says the Teacher,
vanity of vanities! All is vanity.
What do people gain from all the toil
at which they toil under the sun?
... ... ...
I said to myself, “I have acquired great wisdom, surpassing all who were over Jerusalem before me; and my mind has had great experience of wisdom and knowledge.” And I applied my mind to know wisdom and to know madness and folly. I perceived that this also is but a chasing after wind

Working without his brother this time, Joel Coen adapts and directs this new version of Shakespeare’s great tragedy of ambition overwhelming decency and leading to destruction. I almost wrote “a man’s ambition, but the bard made this a couple’s ambition, Lady Macbeth being her husband’s equal accomplice. If ever those tempted to seize power by unsavory means should have heeded Jesus’ example during his wilderness temptation, it is this benighted couple. Casting Denzel Washington to play opposite the director’s wife Frances McDormand, Coen boldly uses colorblind casting well suited to our emerging multicultural society.

That this is his Macbeth we see in the clever use of one actress, Kathryn Hunter, to play the three witches who open the play with their dark foreboding. He also expands the traditional one-word title, reminding us of the nature of the play. It is the witches who assume the role of the Temptor, prophesying not only that Macbeth, returning from a victory over Scotland’s foes, would be rewarded with the title of Thane of Cawdor, but even become king. Told of the prophecy, Lady Macbeth readily agrees to a plot to bring the prophecy to reality. King Duncan’s (Brendan Gleeson) making official that his son Malcolm (Harry Melling) will inherit the throne seems to be the deciding point for Macbeth to set into motion the plan to take the throne. We hear again as he makes his way to Duncan’s bedroom the famous speech, “Is this a dagger which I see before me,/The handle toward my hand? Come, let me clutch thee./I have thee not, and yet I see thee still.” There quickly follows the succession of murders that covering up the first murder necessitates, and of course, the guilt that ensues, ruining the bloody prize that the pair of obtained. Lady Macbeth’s ambition leads inevitably to her death by her own hand and eventually to her husband’s when Birnam Wood does indeed come to his castle.

Shot in stark black and white on a sound stage with minimalist scenery, the film is a modern film noir, as bleak as any traditional one of that genre. (This is made all the more forcef ully by the current remake of Nightmare Alley, reviewed elsewhere in this issue!) The Coens have examined the dark motives of men, such as car dealer

Jerry Ludergaar in Fargo, and in 2009’s A Serious Man, the brothers gave us their take on the biblical Book of Job, which featured the whirlwind, but no God dialoguing with its Job stand-in, a physics teacher named Larry Gopnik. Indeed, the Coen’s would seem to agree with Macbeth who, after learning of his wife’s death, says, “Life is but a walking shadow, a poor player/That struts and frets his hour upon the stage,/And then is heard no more. It is a tale/Told by an idiot, full of sound and fury,/Signifying nothing.”

I believe that this and most, if not all, of the Coen Brothers cinematic output is the kind that the author of Ecclesiastes would produce were he a filmmaker. To say that the Preacher, as the author is sometimes called, is jaded about life is to put it mildly. He seems to be a part of the movement in early Judaism, along with the author of the Book of Job, that called into question those who accepted too literally the myriad assurances in the Psalms that the wicked would always be punished and the righteous rewarded by God. (As in Psalm 37:25, “I have been young, and now am old,/yet I have not seen the righteous forsaken/or their children begging bread.” The Preacher counters easy optimism in such passages as, “Again I saw all the oppressions that are practiced under the sun. Look, the tears of the oppressed—with no one to comfort them! On the side of their oppressors there was power—with no one to comfort them. And I thought the dead, who have already died, more fortunate than the living, who are still alive; but better than both is the one who has not yet been,  and has not seen the evil deeds that are done under the sun.”

Humor is the added ingredient to the Preacher’s darker, or some would say, more realistic view of life, in most of the Coen films. Life might be brutal and short, but we have at least the power to either cry or laugh at it. Their choice is the latter. That, of course, is not to be found in this film, although in many of his other tragedies Shakespeare did work in some puns and other touches that make his audiences chuckle a bit.

People of faith might not agree with the bleak viewpoint of the Coen films, but we can learn much from them, especially this one that can serve a a cautionary tale to reign in our ambition and to stand against the temptation to  seek power at any cost