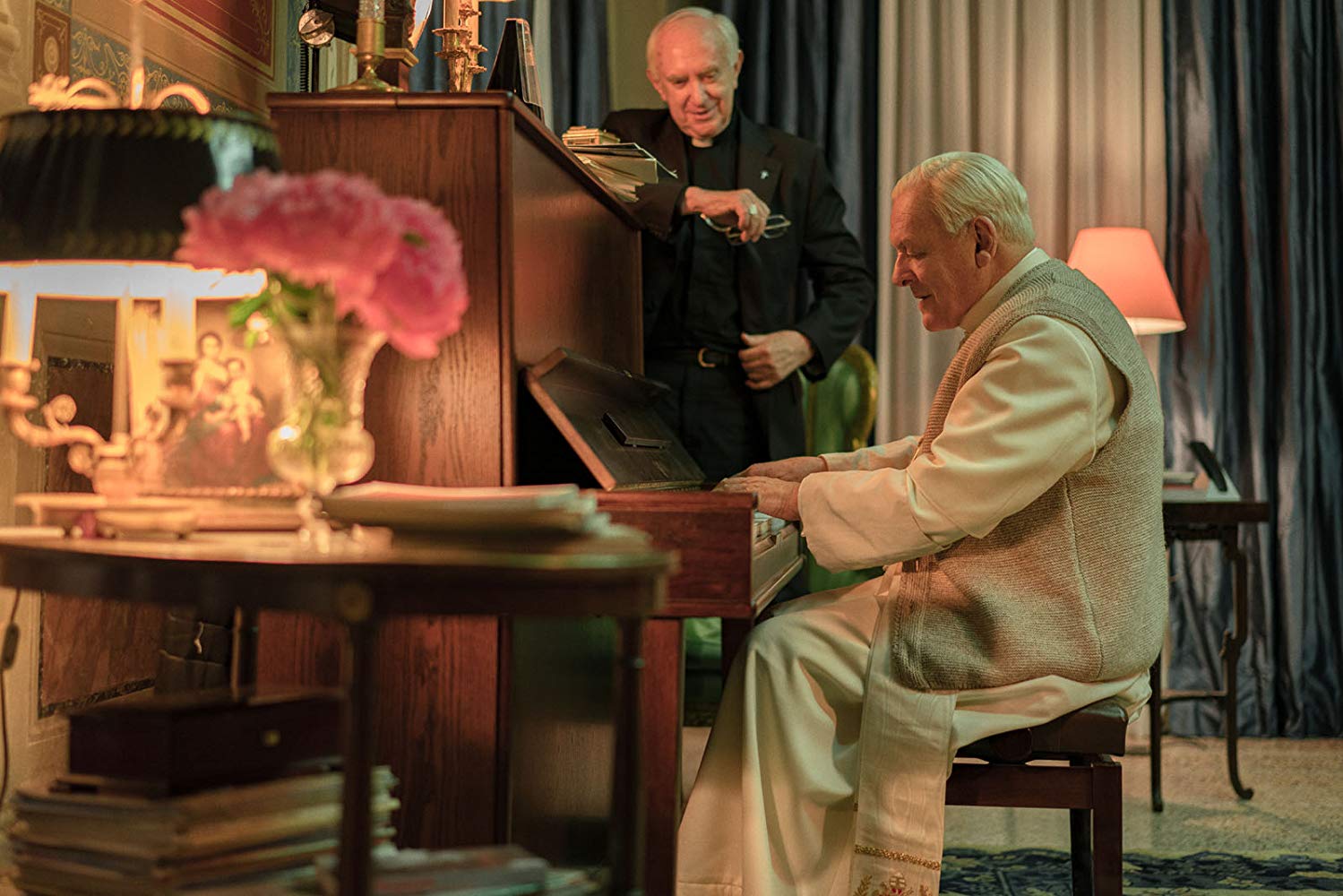 do not fear, for I am with you,
do not be afraid, for I am your God;
I will strengthen you, I will help you,
I will uphold you with my victorious right hand.


When he saw the crowds, he had compassion for them, because they were harassed and helpless, like sheep without a shepherd.

Brazilian director Fernando Merilles (City of God and The Constant Gardener) makes theological discourse exciting in this speculative film about the encounters between Argentinian Cardinal Jorge Bergoglio (Jonathan Pryce) and Pope Benedict XVI (Anthony Hopkins). Anthony McCarten opens up his play The Pope to make for a visually beautiful film, with scenes in crisp black and white filling us in on the Cardinal’s controversial past in his native land during the dark days of its military rule several decades earlier. Protestants, and even non-believers will find this one of the most intriguing character studies of this, or any, year.

We know that the movie will not be a ponderous, pious trip when in a prologue Cardinal Bergoglio, or rather Pope Francis, attempts to make a plane reservation over the telephone and the operator believes that someone is playing a trick on her. When he gives his name, she notes it’s the same as the pope’s, and when she asks for his address and he answers, “The Vatican,” she hangs up on what she thinks is a prankster.

We then move to the past century where in Argentina Cardinal Jorge Bergoglio (Jonathan Pryce) preaches hope to the inhabitants of an impoverished area. Jump to 2005, and the Cardinal and his 115 peers are at the Vatican to vote on a new pontiff after the death of Pope John Paul II. A hand full of cardinals support Bergoglio, but the conservative German Cardinal Joseph Ratzinger (Anthony Hopkins) is favored by a huge majority, he taking the name of Pope Benedict XVI.

Years pass with conservatism growing ever stronger, but the church is wracked by scandals– the sexual abuse of children by rapacious clergy, and fraudulent financial dealings of the Vatican Bank.

In Argentina in 2013 Cardinal Bergoglio is planning to fly to the Vatican so he can follow up on a letter to which he has received no reply. Not feeling at home in a church that places order and ceremony over love and compassion, he has asked to be allowed to retire from his high office and become a parish priest. Is it just coincidence that he receives a summons that Pope Benedict wants to meet with him?

The two meet in the vast garden of Castle Gandolfo, the papal summer residence, and are quickly at odds. Pope Benedict regards the letter of resignation as a public rejection of his papacy, the liberal Cardinal having been critical of him through the years. He sees even Bergoglio’s simple lifestyle as a rebuke, the Cardinal having refused to live in the official palace in Argentina. He complains that the Cardinal gives Communion to divorced people, brushing aside the reply, “Mercy is not reserved for the virtuous; it is dynamite that tears down walls.” The frustrated Benedict answers, “You have an answer for everything. You are too clever.”

Benedict stresses the importance of order and tradition; the Cardinal, the need for the church to relate to people in the modern world. When the Pope speaks approvingly of the glorious art and magnificent cathedrals the Church has built, the Cardinal points out, “In Europe they are empty.” Thus, the two churchmen could not be any further apart in their theology and personal lifestyle.

Their first visit is cut short by an urgent appeal for the Pope to return to Rome, and we see by TV reports that the official trusted by the Pope is in deep trouble because of criminal misconduct at the Vatican Bank. The further confrontations take place in the sumptuous chambers of the Vatican, including the Sistine Chapel, which the filmmakers recreate in magnificent splendor. Throughout their

following encounters, Cardinal Bergoglio keeps pressing for an answer to his request to resign, but the Pope either says No or simply ignores it. Then, in a small room adjoining the Sistine Chapel, appropriately named “The Room of Tears,” the Pope reveals a closely guarded secret. He plans soon to resign. After overcoming his shock, the Cardinal pleads with him not to. It has been almost 700 years since a pope gave up the office. It will shake the faithful. Despite these pleas from one he considers his chief opponent, Pope Benedict is insistent.

As they argue back and forth, we see that surprisingly, Benedict has come slowly, and reluctantly, to the conclusion that his simple living and highly popular critic is the man to follow him. Again shocked, Bergoglio says No, and as he confesses his dark past, we see the black and white flashbacks to Argentina during the dark days when the military killed thousands of its critics during its harsh rule. Actor Juan Minujin portrays the younger Bergoglio when he was the head of the Jesuits in Argentina and Paraguay. To ward off the regime’s charge that he was a Marxists because of his working with the poor, he sorts out and burns books by Marxists and left-leaning liberation theology writers in the seminary library. In a related sequence he orders two priests, the Revs. Franz Jalics and Orlando Yorio, who once had been his teachers, to give up their project in the impoverished community of Rivadavia. When they refuse, he dismisses them from the order, and, now that their protection is gone, the pair are arrested and tortured by the government. Bergoglio does meet with a general on behalf of arrested clergy but is paid no attention. Many priests in his own order are angry with him because he does not publicly condemn the rulers, thus escaping arrest himself.

Pope Benedict lays aside his Cardinal’s objections, and then asks to make his own confession. Among them is his admission that he protected his priests rather than the people. Bergoglio is upset over this, but offers absolution, even as he had received it for his shortcomings. What they do then is more the filmmakers’ wishful thinking than historic fact, but, given that all of the clerics’ verbal exchanges have been conjectured, we are filled with hope that good will can bridge ideological and theological gaps. (The filmmakers have asserted that all of the views expressed by the two in the film can be found in their writings and speeches.)

The film is blessed not only by a theologically literate script and creative directing, but by the performances of two thespian lions at the height of their powers. Jonathan Pryce, last mentioned in these pages for his role as the self-centered husband of Glenn Close in The Wife, exudes the simplicity and compassion, mixed with guilt, that led him to take the name of the little saint of Assisi upon becoming pope. Anthony Hopkins, whose performance I admired as C.S. Lewis in Shadowlands and feared as Hannibal Lecter in Silence of the Lambs, makes us see the humanity of a rigid and lonely man who loves tradition and the outward splendor of a church that he believes must stay strong in order to fight a hostile, secular world. His love of music is good to see, and the scene in which he and Bergoglio watch his favorite TV series about a police dog is a delight.

The criticism I share with others is that there is almost no background given for Benedict, other than the slur from a couple of Italians that he is a “Nazi,” referring to the pontiff’s membership in the Hitler Youth. In his defense, it should be said that all German teenagers, if they wished to advance in education, sports, or a career had to belong to this brain-washing organization. But, unlike the extensive flashbacks for Bergoglio, there are none for Benedict. It would have been both helpful and interesting had we seen a few incidents of his life in Germany during the Hitler and post-war years.

It could be that the focus on the liberal Argentinian cleric is because the filmmakers share his progressive views. In the last scenes of the film they show Pope Francis speaking fervently on behalf of migrants, the poor, and other oppressed groups. Both they and Pope Francis are channeling the concerns of the prophets. And, as can be seen in the two Gospel passages above, of the Galilean who was the first shepherd of the flock.

This gorgeous film recreates what Pope Benedict XVI and then Cardinal Bergoglio might have said to each other during their meetings before the latter resigned.
Editor Rating ★★★★★4.5 out of 5
More Details