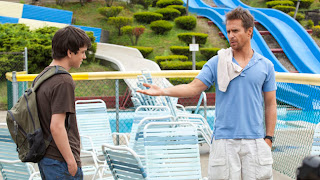 Duncan meets the man who will change his outlook on life.
(c) 2013 Fox Searchlight Pictures

One of the best comedy-dramas of the year involves poor 14 year-old Duncan (Liam James) and his newly divorced mother Pam (Toni Collette) invited to spend the summer at the seaside cottage of her new boyfriend Trent (Steve Carell). It is very symbolic that in Trent’s station wagon the shy Duncan sits in the very back seat that faces backward. Trent is one of those cocksure guys who’s convinced he’s a blessing to everyone else, so he asks Trent how he would rate himself on a scale of 1 to 10. Flustered, the boy answers, “6.” Trent yells back, “3,” leaving he boy humiliated and enraged.

What a way for a potential step dad to start off with his lover’s son! Trent’s disdainful daughter Steph (Zoe Levin) is just as difficult, snubbing the slightly younger boy. And Pam, asleep up front misses this putdown, but later when she hears others, keeps silent, obviously not wanting to spoil her first serious relationship since her divorce. Several times she realizes that a caustic remark by Trent her son has hurt her son, but she seems powerless to come to his aid, other than by a wistful glance in his direction.

When they arrive at the cabin their neighbor Betty (Allison Janney) almost overwhelms them with her gushy welcome and gossip about the other summer residents. Her daughter Susanna (AnnaSophia Robb), about a year older than Duncan, tries to strike up a conversation with Duncan, but the withdrawn boy barely responds. He would much rather be with his dad, but the latter claims his circumstances do not allow this.

Duncan soon finds escape from the cabin via a bicycle (a girl’s bike, a pink one at that!) that he discovers in the cluttered garage. During his rides around the town and its environs he comes upon the Water Wizz Park where the crazy-talking Owen (Sam Rockwell) works as a jack of all trades. His humor at first falls flat on Duncan and at times almost gets him fired by his long-suffering boss. However, as Duncan returns day after day, the boy finds he has a father figure, an adult who actually listens to him because he cares about him. The sober boy even begins to get Owen’s humor as his mood lightens up. Duncan hires on, finding a supportive group of fellow employees that are in stark contrast to Trent and the others back at the cabin—with Susanna, to whom Duncan slowly opens up, being the exception. He even gains the nickname “Pop ‘n’ Lock” when he awkwardly attempts to break dance.
None of Duncan’s exploits are known to Pam or Trent, this to me being the weak point in the plot—how could a boy stay out all night or get a job without his mother’s knowledge and consent? Pam does ask him where he’s been or what he’s been doing when he returns at the end of the day, but his generalized answers would never satisfy a real mother: all the ones I know would have been all over him or gone out during the day to find him. Despite this, director Nat Faxon and Jim Rash have given us a good coming-of-age film. The campfire scene in which the transformed Duncan blurts out to his mother the truth about Trent’s philandering, is powerful drama, especially when Trent lashes back with the truth about Duncan’s father, that the man is too busy with his new family for Duncan to come and spend time with him.
This is one of those films that stand out when compared to the usual inane summer comedy. It is mostly devoid of the juvenile anal humor of so many Holly wood films about teens. There are adults who are jerks, but also some who have the wisdom of experience to impart, and the compassion to pass it on. The ending also resists our desire that Pam dump Trent and link up to Owen so that they can “live happily ever after,” the ending being somewhat ambiguous. Even Trent (and I think Steve Carell deserves great credit for playing this less than likable guy) might have learned something from this vacation, cut short by events of the night on the beach.

Note:The complete review with a set of discussion questions is included in the Sep/Oct. issue of Visual Parables.

One Reply to “The Way Way Back”