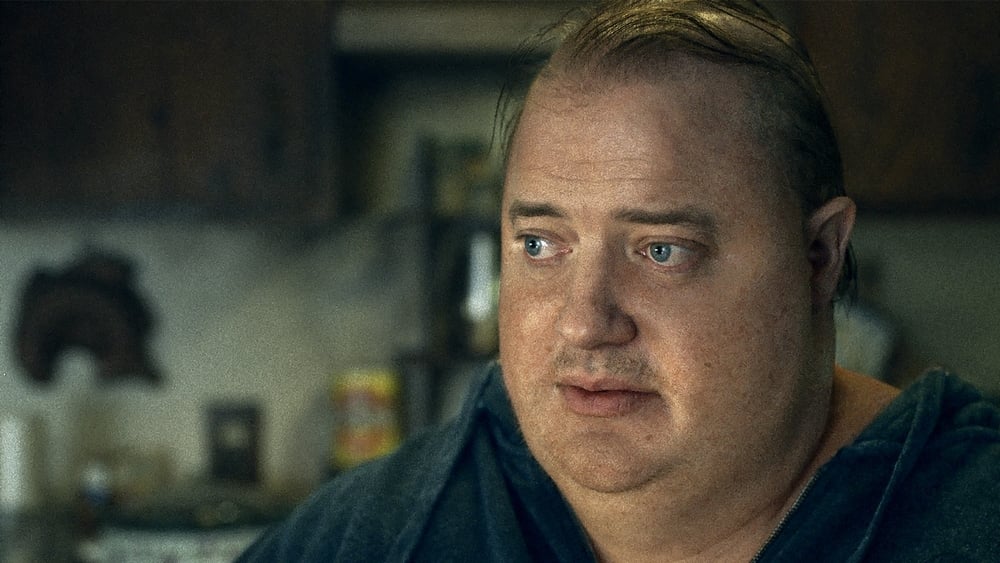 For my life is spent with sorrow
and my years with sighing;
my strength fails because of my misery,
and my bones waste away.

I am the scorn of all my adversaries,
a horror to my neighbors,
an object of dread to my acquaintances;
those who see me in the street flee from me.

Darren Aronofsky’s new film, the script adapted by Samuel D. Hunter from the latter’s own play, is a powerful parable of remorse, self-punishment, and attempted reconciliation. It is one of the most unusual father-daughter films you are ever likely to see. The title refers both to the protagonist’s huge body and America’s first great novel, Moby Dick.

Charlie (Fraser), a morbidly obese middle aged man teaches via Zoom a group of college students the fundamentals of writing. They wonder why his screen is always dark, none of them buying his lame excuse that his camera is broken. Cut to his house, and we see that he is so obese that he has trouble rising from a chair. He uses a walker to navigate and one of those claw hammers on a staff to pick up anything that falls to the floor. A caretaker Liz (Hong Chau) gives him his shots and other care and blunt advice and pleas to go to the hospital, lest he die within a week from congestive heart failure . She obviously cares for him. We soon learn that she is the sister of his lover. Ever since the latter’s suicide Charlie has given in to his compulsive eating disorder that has turned him into a house-bound outcast.

That he is saved from a heart attack is due to the intervention of door-to-door Christian missionary Thomas (Ty Simpkins). The naïve young man belongs to the New Life cult which teaches that Christ will return soon, so that the members are enjoined to sign up as many converts as possible. Liz is against what she regards as his meddling, so she keeps trying to run Thomas off, but the boy is persistent because he believes that his saving Charlie’s life is by divine design.

The fourth person to enter the story is Charlie’s estranged daughter Ellie (Sadie Sink) whom he has contacted in an attempt to reconcile with her. She is angry and contemptuous because about nine years earlier he had walked out on her and her mother when he had fallen in love with Alan. During almost ten years he had not tried to contact her. She wants no part of him now, but, drawn by his promise to will his large savings account to her, agrees to visit him if he helps her with her school work, which she is currently failing. He agrees to write her papers assigned her in English class.

Father and daughter have agreed to keep their restored relationship a secret from her mother Mary (Samantha Morton), but of course, she finds out and also shows up at his home to express her disapproval. Still a sixth character whom we for a long while see only as a shadow through the house’s partition blinds is Dan the pizza deliverer. Charlie never opens the door to him, but speaks through the closed door, informing him that he has left a twenty dollar bill in the mailbox for him. Only near the end will Charlie speak face to face with him.

There is a lot of venom spewed against Charlie by his Ellie and Marie, and even Liz breaks with him for a while, stymied by his self-destructive impulses. There are also several zoom class sections, during which Charlie urges his students to write honestly. This eventually leads him to reveal the truth about himself to the students. And to a stirring climactic encounter with those whom he loves that is both tragic and yet positive.

I am adding this film to my list of outsider films because of the extreme measures he undertakes. His gayness already thrusts him into the outsider camp, but his 600 pound bulk resulting from his compulsive eating disorder he developed after the death of his love perhaps makes him even more of an outsider in a culture that worships slimness. Just think for a moment about all the ads for diet products, exercise regimens and the millions of images of skinny models you have seen.

The film is also a stark exploration of the sorrow and misery mentioned in the quote from Psalms, as well as the remorse so great that it drives a person to take desperate measures to alleviate it. Charlie knows that he is near the end of his life and that it has not been one that is well lived, hence his attempt to repair, if not restore, his relationship with the daughter whom he has wronged. He even feels guilty for the suicide of Alan, blaming himself for not preventing it. Fortunately he has Liz who reminds him that no one could have done so, that he actually gave his lover an extra ten years by loving him.

In the person of Thomas we se the inadequacy of a narrow brand of Christianity, although maybe his perseverance at least is commendable. No one can “save the soul” of another. All the person can do is be a witness, or a conveyer of “good news” to another person.

Something the film’s unusual ending leaves us to ponder is how the old essay on Moby Dick that Charlie submits for Ellie’s school paper plays such a crucial role in the movie’s transcendent final sequence. Are Charlie and Captain Ahab both consumed by passions that are self-destructive? Or is Charlie trying to make atonement for his abandonment of his family by eating himself to death so that Ellie will inherit his wealth? One thing about the film, I believe, is plain from Charlie assertion “All human beings have the capacity to care.” In his defense we have to say that includes Charlie as well. He too is consumed by the need to love and be loved. If only Charlie could join with the Psalmist in saying, “But I trust in you, O Lord; I say, “You are my God.” (v. 14)

A guilt-ridden obese gay father tries to reconnect with the daughter he abandoned years ago so he could live with a suicidal gay partner.
Editor Rating ★★★★★4.5 out of 5
More Details