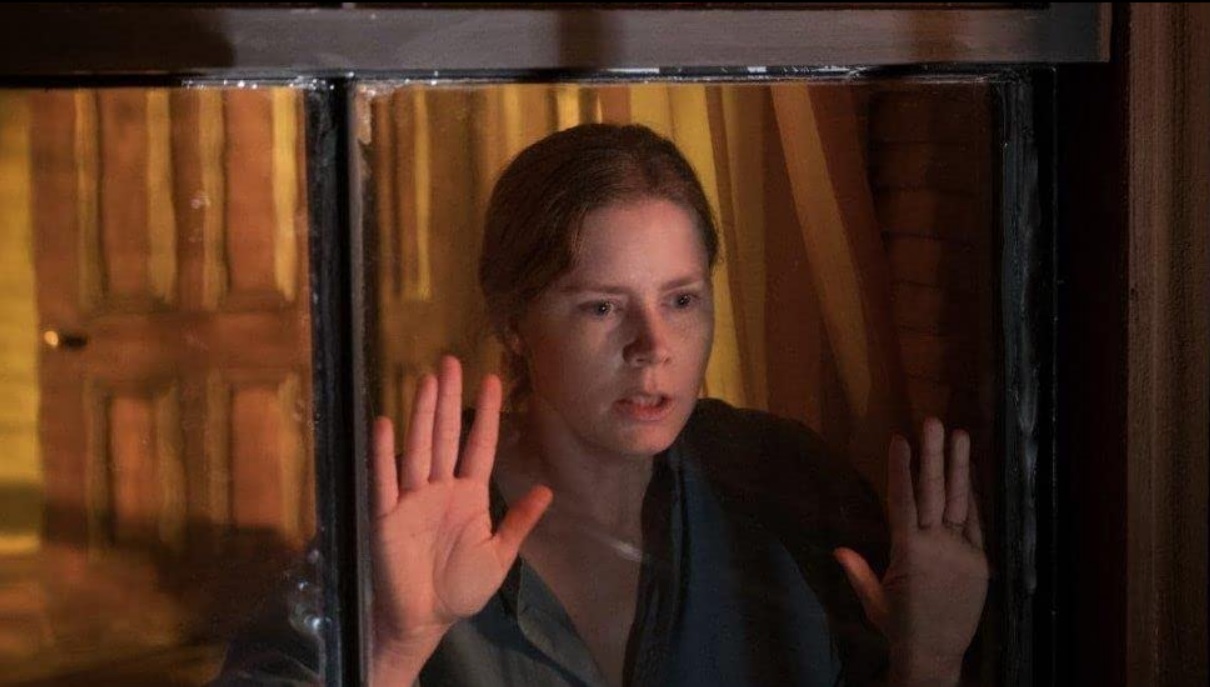 For at the window of my house
I looked out through my lattice,
and I saw among the simple ones,
I observed among the youths,
a young man without sense,
passing along the street near her corner,
taking the road to her house
in the twilight, in the evening,
at the time of night and darkness.

Going way back to Biblical times we have spied on neighbors through our windows. In director Joe Wright’s The Woman in the Window, based on a novel by A.J. Finn, it isn’t a youth’s seduction by a prostitute that Anna Fox (Amy Adams) sees. It is sexual, though. The young couple that have moved into the Manhattan townhouse across the street from her brownstone freely make love in plain view. By choice or whatever, they have neither curtains nor blinds. Anna is shocked, shocked, shocked. But still to see the details better, she diverts her binoculars from bird watching to people, or rather, sex watching.

The plot will be familiar to many—there is a 1944 Fritz Lang film of the same title, but its story line is very different. Closer in plot is Alfred Hitchcock 1954 classic Rear Window. In that one, the house-bound character was a man played by James Stewart, a photographer in a wheelchair. With a few twists writer Tracey Letts’ plot follows a similar arc to the Hitchcock film. Separated from her husband Ed (Anthony Mackie), Anna is a child therapist living alone, except for her tenant, David (Wyatt Russell), who lives in the basement. It has been a long time since she has dared to venture out of the house because of her severe case of agoraphobia. Her therapist Dr. Landy (Tracy Letts—yes, the film’s writer) comes to her home to treat her. He has a plan to get her outdoors, but thus far it has not worked.

The couple have a teenage son Ethan (Fred Hechinger) who rings her doorbell. He has a gift from his mother, he says. He seems a bit weird, making such comments as “I like cats’ tongues” when her pet cat licks him. They get on well, and he borrows a number of her movies . Ethan’s mother, Jane Russell (Julianne Moore), also drops by, and the two women also get along well, though she too seems “odd.”

Then comes the shocking moment when Anna, using her binoculars, sees Jane being stabbed. However the killer cannot be seen. The police are skeptical. And when Mr. Russell (Gary Oldman) shows up, the woman he claims as his wife is a different Jane (Jennifer Jason Leigh)! Thus we viewers, as well as detectives Little (Brian Tyree Henry) and Norelli (Jeanine Serralles), are presented with the age old dilemma of deciding whom to believe. This obviously disturbed voyeur who is in therapy or the respectable looking couple? Anna has done some investigating, but how credible are her findings and conclusions?

I couldn’t help but think how dumb for the neighbors not to put up blinds and/or drapes. But then, of course, there would be no story. And despite that the path it takes is a well worn one, the film is suspenseful, crowned with a rain-drenched climax that really brings matters to a crashing conclusion. If nothing else, the cast, especially Amy Adams, seem committed, easily holding our attention right up to the roof-top confrontation.

A NYC house-bound woman spying on sexually-active neighbors across the street is startled to see the wife stabbed by a person unseen, but the "facts" do not support her story when she calls the police.
Editor Rating ★★★★★3.5 out of 5
More Details