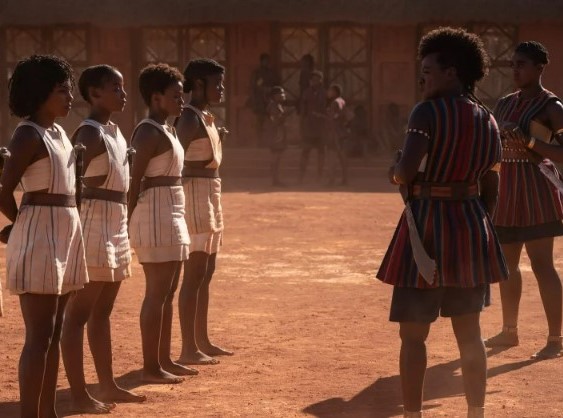 A woman of strength who can find?
She is far more precious than jewels.

The two women at the center of Gina Prince Bythewood period film are not at all the “women of strength” idealized by the author of Proverbs. One is highly skilled in the martial arts, more skillful with a machete than a needle or cooking stove—and the younger one soon will be, for they are female soldiers known as Agojie, often referred to as the Dahomey Amazons. According to Wikipedia they were an “all-female military regiment of the Kingdom of Dahomey (now Benin) which existed from the 1600s until 1904.”

Set in 1823, the story is fictional, but the facts surrounding the women warriors are accurate. Nanisca (Viola Davis) is the general in charge of them and thus a major advisor to young King Ghezo (John Boyega). He must balance his policies amidst his wives and advisors competing for his favor. Nanisca would like to get him to withdraw from the practice of selling captives to slave traders, even though the kingdom has become wealthy from it. She prefers that the kingdom profit by trade and agriculture. We first see that she is no arm chair general in the film’s opening segment when she leads her warriors on a night-time attack of a village the Oyo Empire whose warriors have stolen some of her countrymen. The fighting is fierce, at close range with machetes and spears—and there is no mercy given.

The second heroine in our film is the teenager Nawi (Thuso Mbedu) who refuses to be married off to a much older man who slaps her at their first meeting. Her angry father drags her through the city to the king’s palace where he leaves her. She becomes a member of the band of new recruits, the film becoming sort of an African Full Metal Jacket. However, the rigors of Marine boot camp seem like a kindergarten compared to what Nawi goes through. There are machete drills, hand to hand combat and martial arts, the expected running and walls to climb, and worst of all, a tangle of brambles with spikey thorns the women are supposed to run through, regardless of the slashes and pain they cause. We catch a glimpse of Nawi’s character when she breaks through but then returns to help a friend extricate herself from the dangerous branches.

Nawi is a bit arrogant and outspoken, so she does not get along with Nanisca at first. In one scene Nanisca harshly tells her, “Your tears mean nothing. To be a warrior you must kill your tears.” Fortunately, the veteran warrior Izogie (Lashana Lynch), impressed by the new recruit, takes her under wing, becoming her mentor. During one of the girl’s encounters with Nanisca she reveals that she had been adopted and shows the general her birthmark. The latter is shocked by this—later we will learn of its connection with her own dark past and the trauma that still haunts her.

There are also two men involved, other than the king. Santo Ferreira (Hero Fiennes Tiffin ) is a European slaver, accompanied by the half-Dahomean Malik (Jordan Bolger) is seeking slaves from the Oyos. The latter in the jungle meets by accident Nawi, each attracted by the other. At one point Izogie tells her protege “Love makes you weak.” However, it can also be life-saving, with Malik later on becoming a factor in Nawi’s escaping from Oyo captivity and rejoining Nanisca in the climatic battle, a fierce fight that ought to satisfy action fans.

Although I regret the film’s affirmation of violence and vengeance, it is good to see women as the protagonists, Black women at that. And its many scenes of the royal court and city puts to the lie that old racist cant that Africans produced no civilizations ( a favorite rant of slavers and segregationists). Nor is the feminism an anachronism that Gina Prince Bythewood has projected into the past. The Agojie were real, and as fearful to their enemies as they are depicted in the film. The beautiful uniforms designed by Gersha Phillips are based on old sketches of them, as you can see by Googling Agojie. The film warrants a second viewing just to take in all the details of African culture—not since Black Panther has African culture been so colorfully celebrated. Indeed, the fictional Dora Milaje warriors in the Marvel film are based on the Agojie, so, like many of you, I am looking forward to seeing what role they play in Wakanda Forever, due out next month (Nov. 11).

See article in TIME on the history of the Agojie.

Two women of 19th C. Dahomey's Agojie, the female part of the kingdom's army , one the general & the other a recruit, find they have a bond in the traumatic past.
Editor Rating ★★★★★5 out of 5
More Details