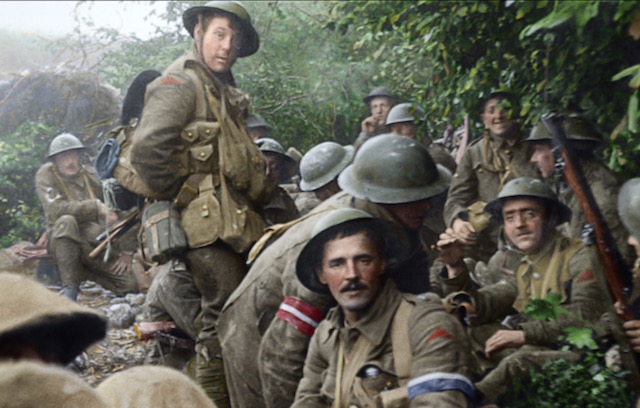 The mighty warriors—fallen, fallen.
And the arms of war broken to bits.


They shall grow not old, as we that are left grow old:
Age shall not weary them, nor the years condemn.
At the going down of the sun and in the morning
We will remember them.

When Peter Jackson (yes, that director of the Tolkien series) was asked by the London’s Imperial War Museum to make a film to commemorate the hundredth anniversary of the end of World War One, he decided his would be different from other documentaries using archival film—he had at his disposal a huge amount of war footage, most of which had not been used before. You know, how jerky old films look because they were shot at a different camera speed from today’s 24 fps cameras. Soldiers marching look like they’re doing double time, and cars and horses almost look like they are racing. And so his crew not only cleaned up the old film but digitally remastered and changed its timing and managed to transform it into 3D. And to film purists—gasp—he went to the radical extreme to colorize most of it. This is World War One coverage you have never seen before!

Jackson does not give us a history lesson—no list of dates, battles, generals, and such—instead, he immerses us in the war through images and voices—lots of photographs and drawings as well as film—so that we see the war from the perspective of the soldiers in the trenches.

There is no narrator, just a non-stop succession of voices commenting on their experiences—at training camps, on the trains and ships transporting them across the Channel, in small villages, on their way to the front as they passed the battered troops they were relieving, in the trenches as they tried to stay alive during bombardments or avoid sniper fire, as they prepare food or slept amidst the rain and the mud, in villages when on a rest period, during the moments when they went over the top and charged a German trench where machine gunners mowed so many down, going to the rear with German prisoners, and more. Although large, lumbering tanks are shown in several scenes, the film emphasizes that mechanization had not advanced so as to render obsolete horses and mules. Their carcasses during artillery barrages add to the bulk of mangled and bleeding bodies strewn throughout a targeted area. Oddly, I saw no trace of airplanes or barrage balloons.

The audio track must have at least a hundred different soldiers sharing their experiences—the list of them took several minutes of the end credits. Jackson discovered that the BBC had amassed a huge archive of interviews of surviving veterans used to produce a radio program about the War in the 60s. He finds film clips that beautifully match up with the speaker—if mud and deep water filling the trenches at time, lice, preparing food, the poor quality of army-issued cigarettes, the availability of French prostitutes, or whatever, we see it as well as hear about it. The soldiers talk about foot disease, lice, and the difficulty of shaving and cleaning their uniforms, the latter being the first thing they did because of army regulations that even their buttons be clean and shiny at all times. Jackson even went to the trouble of having lip readers study what he silent images were saying, and then employed actors to dub in the words!

The soldiers talk matter-of-fact about the horrors of artillery blasts and what shrapnel and bullets can do to the human body. The horror is palpable due to the stills of torn and mangled bodies we see, making the film probably too gruesome a film to allow a child to see. Heck, I know some adults who will close their eyes during such shots. There is no glorification of war here. Some of the soldiers did speak of being motivated in 1914 to enlist by patriotism, but it did not take long in the trenches to dispel any feelings of idealism. In fact, when they capture Germans, there is a lot of friendly fraternizing with them. They discover that the Bavarian Germans even hate the martial Prussians whom they too regard as inhumanly cruel. At the end of the war, several express their belief that the war was useless.

Almost as equally sad as the fate of the blown apart and gassed is the fate of virtually all who returned to an England of unemployment and indifference. Most of the men had seen too much horror to want to discuss it, but even if they had, they found that the civilians could not u understand them, and worse, were not interested in hearing them. Everyone wanted to get back to “normalcy.” One soldier says the veterans were “a race apart.” If they did try to explain their war experience, some civilians would argue over the facts, so that another veteran merely says, “They weren’t there.”

One additional note:  I really meant it when I wrote that Jackson does not show “t he big picture” of the War. The soldiers voices, I believe from reading the end credits, are all of soldiers from Great Britain. I do not recall any mention of the entry of the U.S. tipping the balance of power and ending it within a year.

This review will be in the February issue of VP along with a set of questions for reflection and/or discussion. If you have found reviews on this site helpful, please consider purchasing a subscription or individual issue in The Store

This film about World War One focuses narrowly upon the experience of the soldiers in the trenches & their reflections during & after the war.
Editor Rating ★★★★★5 out of 5
More Details