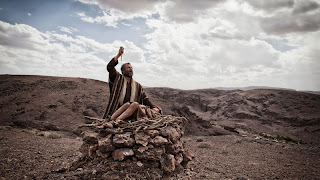 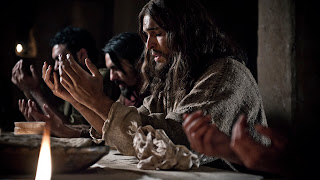 1. Abraham about to sacrifice his son.  2. Christ at the Last Supper

An ambitious and spectacular new series entitled “The Bible” begins on the History Channel this Sunday, March 3. (Consult your local paper for the time). The ten hour-long series covers many of the highlights of the Old and New Testaments, beginning with stories from Genesis (Abraham is prominent here), the saga of King David, the life, death and resurrection of Jesus, and the beginning of the work of the apostle Paul’s ministry.
I have not been able to watch the entire series, but from what I have seen—there are eight very generous-length clips posted on HC’s website there is much to admire, and for some, parts to be taken with a grain of salt. By the latter I mean that the approach to such a story as Noah’s Ark in a literal one, accepting the historicity of the event.
The clip depicting the Sacrifice of Abraham is very well done, bringing out the drama of the father’s agony over carrying out what he perceives to be the will of God, as well as the boy’s puzzlement and fear of what his father is about to do. Added to this is the cutaway to mother Sarah, becoming aware of her husband’s attention and rushing frantically up the mountain to stop the terrible proceedings. If the other scenes of their life together are as well done as this, viewers will gain a deeper appreciation of the humanity of the biblical characters.
The other major story in the first week’s two-hour presentation is that of Moses, the available clip showing Moses on a windy night taking shelter in a small tent while watching the sheep when he spots the burning bush. Nice special effect, though purists might wonder why the voice from the bush does not tell Moses to take off his shoes. Also missing (and this is more important), Moses does not try to escape his calling by coming up with excuses. Maybe this is included elsewhere. However, it is good to see the inclusion of some flashbacks in black and white to Egypt where he killed the taskmaster.
In Week 2’s presentation adventure lovers will appreciate the stories of Sampson and that of David and Goliath. Especially intriguing is the use of black actors in portraying Sampson and his mother. In the confrontation between David and Goliath David is shown as a youth. On his way to meet the Philistine champion, who is seven feet or more tall, David bolsters his courage by reciting the 23rd Psalm. Probably not very historic, but a nice dramatic touch.
Weeks 3, 4 & 5 deal with the ministry of Christ. The actor playing Jesus is the usual European (or we should say American) actor giving us a dramatically satisfying portrayal of a strong leader. The clips show: Jesus ordering Peter to go fishing again and then calling him to discipleship; John the Baptist and the baptism of Christ; Jesus’ walking on the water; The Last Supper; Pilate’s meeting with Jesus; and Ananias and Paul.

Some observations about the scenes: An interesting touch of the walking on the water episode is the inclusion of Mary Magdalene with the disciples in the boat, justifiable in that the gospels tell us that she and some other women traveled with the disciples to tend to their needs. The writers draw heavily upon John’s gospel in the Last Supper and the meeting with Pilate. An interesting non-biblical scene is the one in which Judas staggers out of the room after taking the bread from Jesus; he spits it out of his moth as he passes a mysterious stranger. Matthew’s bit about Pilate’s wife warning him not to judge Jesus is included. The 10th clip expands upon Acts 9:10-22, in which Jesus appears to Ananias commanding him to go to the blinded Saul. Saul is very remorseful, almost groveling at one point until Ananias, pouring a pitcher of water over his head, baptizes him. In a close up of Saul/Paul’s face we can see the remorse giving away to relief and confidence that he is a changed person.
Of interests to teachers is the commentary and “Questions to Reflect Upon,” clearly showing that the people responsible for producing the series Roma Downey and Mark Burnett are not out just to entertain us. There are so many features on the site ( http://www.bibleseries.tv/) that you could spend several hours exploring all of them. Thus even though I have qualms about the literalistic approach in some of the episodes, I heartily commend the series—and hope that the rest of it is as good as the clips displayed on the website. (From an “Extended Look” video it is evident that many other stories are included—Sodam and Gommorah, David & Basheba, etc.) It is good to see the History Channel getting back to its original purpose, the entertaining presentation of history.