Many years ago one of the hit songs heard everywhere included the line, “Those far away places with the strange sounding names that are calling, calling me.” One of the reasons why I love film so much is its power to transport us to those “far away places” where we meet interesting people who see the world differently from myself and my friends–and yet, as their stories unfold, whose feelings are not so different after all. Such is the case of the two films briefly discussed below. 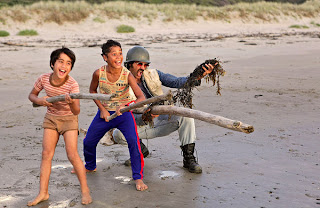 Director Taika Waititi’s film is an inventive coming of age tale set in a Maori Village in Waihau Bay, New Zealand during 1984. 11-year-old Boy (James Rolleston), an  ardent  Michael Jackson fan lives with his grandmother, his younger brother  Rocky (Te Aho Eketone-Whitu), several little cousins, and the goat, the latter being their source of milk for the impoverished family.

Their father Alamein (played by the director) was imprisoned a little before Rocky was born, and their mother died shortly thereafter. Thus Boy often has had to watch over Rocky and their cousins, as is the case now when Gran is away for a week attending a funeral at the other end of the island. Despite his family responsibilities, Boy spends a lot of time with friends, sometimes making a fool of himself when he tries to impress a girl with his poor imitation of Michael Jackson’s Moonwalk. Rocky fantasizes that he has superhero powers to make things happen–and when he tries them out, sometimes the person slips or trips so that the lad is convinced that he does.

Boy has nourished his dreams of his father being a hero, so he is very happy when Alamein drives up with two doltish friends who fancy that they form a tough gang. Although Dad does play with the kids (indeed, he seems more of a kid than boy at times), he spends most of his time smoking pot and digging with his friends holes in a nearby field. It seems that he has buried a sack of money before the police had caught up with him, but he can’t remember the spot.

The film is enhanced by some funny drawings by Rocky that come to life, expressing his thoughts or commenting on a character or the action. How Boy comes to terms with the father of his dreams and the reality of the loser who sometimes abuses him is both funny and poignant at times. The fate of the money is especially a delight. The film shows the Americanization of other cultures, but not in a judgmental way so much as suggesting that no national or cultural boundary is impervious in today’s world. (Alamein himself is taken by the title of the novel Shogun.) Best of all, the film demonstrates the resiliency and imagination of children, helping them to survive when reality fails to live up to their dreams. 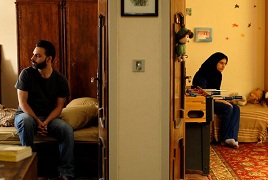 Nader and Simin are separated by more than a wall.
(c) 2011 Sony Pictures Classics

Asghar Farhadi’s film might come as a revelation at a time when some are beating the war drums in an attempt to move us to go to war against Iran because we fear their nuclear program. The winner of the “Best Foreign Film” Oscar, this domestic strife story avoids all politics, except for the reason that wife and mother  Simin decides to leave, and then divorce, her husband. She wants to emigrate from Iran because she hopes to give her daughter Termeh opportunities which the male-dominated Iran prevents women from enjoying. I suspect that that was as far as he felt he could go for social commentary if he wanted to see his film shown beyond his own country.

Nader, the husband and father, refuses because he is the sole caregiver of his Alzheimer-afflicted father, now in need of watching every single minute. When Simin leaves home, Termeh chooses to stay with her father because she believes that this will bring back her mother: she knows that if she accompanies her mother, Simin will take them out of the country, thus depriving her of the father whom she loves in equal measure. When Nader hires a woman to watch his father while he is at work, he unleashes a chain of sad events that brings anguish and heartache to everyone, the film ending on a note that will puzzle and upset those who like everything in their films to be tied up neatly by the end.

The glimpses of Iranian society show a world in which people are neither fearful of their government nor rebelling against it, but simply trying to get on with their everyday lives. Simin and Nader are as secular as most Americans, whereas the family of the caretaker are devout Muslims. The court scenes are intriguing because the system seems to abide by secular rather than Sharia law.

Both films  are confined to the art house circuit, but their release on DVD should make them available to a wider audience.