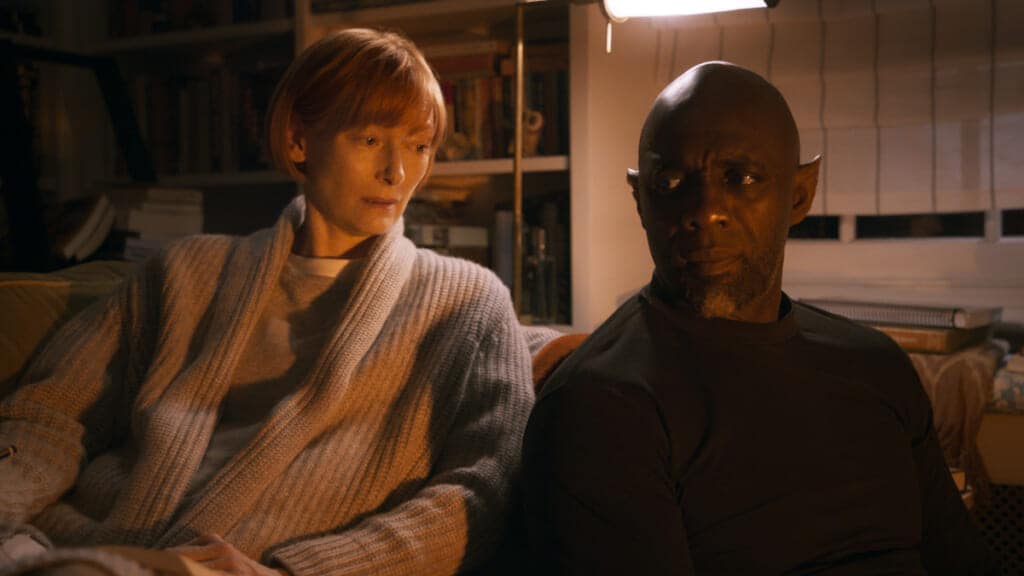 With many such parables he spoke the word to them as they were able to hear it;  he did not speak to them except in parables, but he explained everything in private to his disciples. 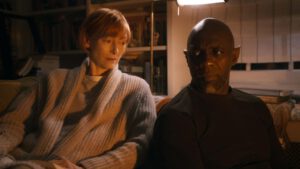 George Miller, who helmed one of my favorite fantasy fables, BABE: Pig in the City, again enters the realm of fantasy in this tale that seems tailor-made for Tilda Swinton. Filled with CGI special effects, the film sweeps us through the three millennia of history, as indicated in its title. He co-wrote the film with Augusta Gore, his daughter, basing their screenplay on the 1994 story “The Djinn in the Nightingale’s Eye” by A.S. Byatt.

Dr. Alithea Binnie (Tilda Swinton) was left by her academic husband years ago in pursuit of a younger woman. She has come to terms with her aloneness by packing up anything associated with her ex-husband into a labeled box and by diving deeply into her studies, becoming a world-renown narratologist. She has come to Istanbul to give a series of lectures on story telling in which she points out how mysteries of existence once explained by myths are now the realm of science. “All gods and monsters outlive their purpose, and are reduced to the role of metaphor.” There is a question of how this might have influenced our sense of wonder. Her lecture is brought to an abrupt end when she faints as a result of an hallucination.

At an antique shop she buys a striped glass bottle, and in her hotel room starts to clean away the grime around the lid. Breaking it in the process, she unleashes a Djinn the size of a pickup truck. When he reduces his size so they can speak face to face, he still must be close to 7 feet tall. His pointy ears, chocolate colored skin, and little goatee gives him a distinctive appearance. And, of course, he offers Alithea the traditional 3 wishes. He explains that there are limitations, a wish for immortality is forbidden, for example. However, she is contented with her life and turns him down, telling him a story about 3 men in a boat. Also, as a student of stories she knows the sad results of such wishes, all such stories taking the form of cautionary tales. And, besides, he may very well be a trickster.

Puzzled at this, the Djinn perseveres, explaining that only after 3 wishes are granted can he be set truly free to pursue his own longing to find the perfect soul mate. Alithea still refuses to make a wish, so, to convince her of his sincerity, the Djinn tells her 3 fantastical tales about his history.

He begins with a legendary story, part of which you will recognize from the Bible. The Djinn claims that he was the teacher and consort of the Queen of Sheba. We see his longing in his words, “She was not beautiful. She was beauty itself.” But then King Solomon showed up and spoiled matters for him. There’s an incredible one-man-band stringed instrument that Solomon plays, even one part (a lyre) that is alive and plays music to the accompaniment of the rest, the music helping the king to seduce the queen. Thereupon king forced the Djinn into the bottle and threw it into the sea.

The Djinn’s  2nd tale begins with the bottle being found by a young slave of Suleiman the Magnificent in his magnificent palace. She wished to become a concubine of the Prince, but due to palace intrigue both the Prince and the girl wound up dead and the Djinn still imprisoned in the bottle. The tale continues with a bloody episode 100 years later involving two royal brothers and a concubine, ending with the Djinn still stuck in the bottle.

The 3rd tale, set in the 19th century is about a woman scholar named Zefir who had been forced into a marriage while still an infant. Gifted by her elderly husband with the bottle, she at first wishes for great knowledge. However, of course, this doesn’t work out, and like the other stories, ends with the Djinn trapped in the bottle and longing for a true love.

The Djinn and Alithea enter into long conversations, and as they proceed, Alithea, coming to understand his solitude and his longing, wishes that the Djinn would fall in love with her. What follows ends as about as satisfactory as a love story between a mortal with a limited life span and a supernatural immortal can.

The CGI effects are eye-pleasing, and the two principal actors keep our attention riveted and our minds wondering what they will do next. There are some violent moments that might make parents hesitate to share this with their children. Indeed, as I think back to my childhood fear of spiders, there is a brief scene involving the little creatures that could lead to a nightmare. However, I loved the exploration of storytelling—Alithea, in that stories have so intrigued her that she has found escape from her husband’s betrayal by making them her life-long study; and for the Djinn his way of explaining his life and winning over his skeptical listener so she will come to his aid. There is even a delight in the detail concerning Alithea’s Istanbul hotel room that her host has booked her in—she is told it is the same room where the great story teller Agatha Christie wrote Murder on the Orient Express.

It is a pity this film has not caught the attention of the family, so if it is still playing at a theater near you, get out to see it soon. It should be seen on a big screen to fully appreciate the many details of the fantasy scenes.

A female narratologist in Istanbul is wooed by the Djinn in a bottle she has purchased, he hoping she will set him free by making 3 wishes, but when she refuses, he tells her stories of his past to co
Editor Rating ★★★★★4.5 out of 5
More Details