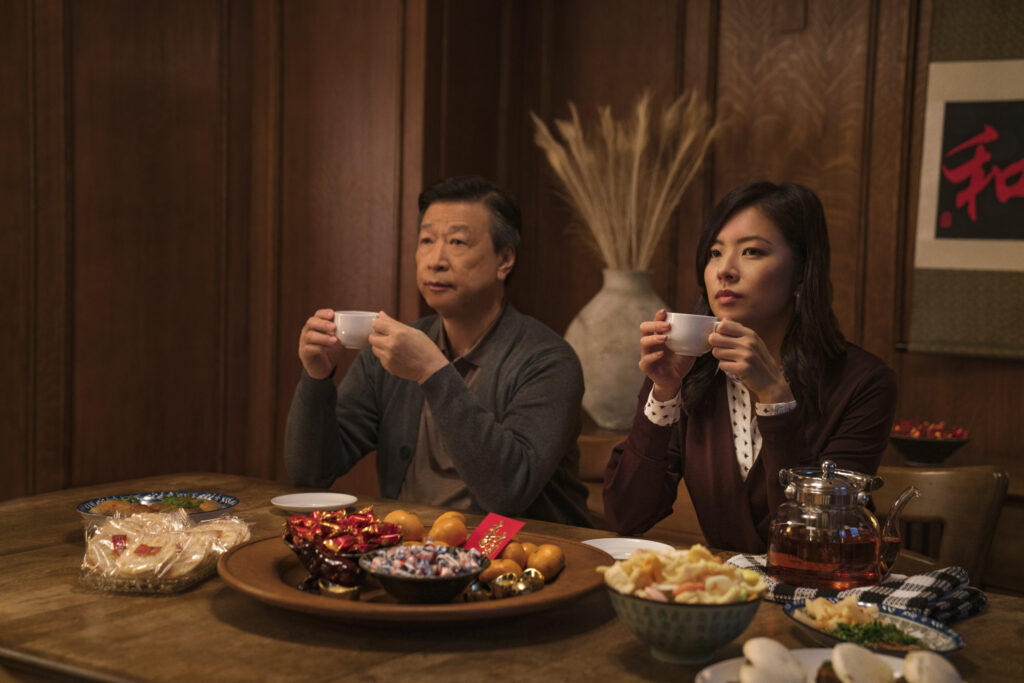 This image released by Netflix shows Tzi Ma, left, and and Christine Ko in a scene from "Tigertail." (Sarah Shatz/Netflix via AP)

Do not human beings have a hard service on earth,
and are not their days like the days of a laborer?


Ho, everyone who thirsts,
come to the waters;
and you that have no money,
come, buy and eat!
Come, buy wine and milk
without money and without price.
Why do you spend your money for that which is not bread,
and your labor for that which does not satisfy?

The past is not something we leave behind, but, as long as we have memory, is always with us, inside our heads and hearts. Or so writer-director Alan Yang seems to be saying in the title of his remarkably acted story centering on a failed father-daughter relationship. (And also, the failure of the bonds of a husband and a wife.) Although he is well known to TV viewers, this is Mr. Yang’s first feature film, but hopefully not his last!

The film spans three Taiwanese generations, beginning in the early 50s, when the freshly arrived Kuomintang have arrived on the island and are eliminating their political rivals, to modern day New York City where an immigrant son has devoted all his time and energy to fulfilling the American Dream but lost his wife and his daughter in the process. The film moves back and forth in time, each period given a different color and film texture (16mm in the earliest segment).

In the earliest segment Pin-Jui (Zhi-Hao Yang) lives with his grandmother in the rural village (whose Taiwanese name translates as Tigertail) because his widowed mother has lost her job and thus cannot support him while she hunts for another one. Missing her badly, he imagines that he sees her in a rice field. His loneliness is partially assuaged by his friendship with a girl his own age Yuan Lee (Hai-Yin Tasi). Also, during this period, while his grandmother  hides him in her cupboard from soldiers searching for dissidents, he absorbs her dictum that a person never allows anyone to see him crying.

A couple of decades later Pin-Jui (Hong-Chi Lee) works in the same factory as his mother Minghua (Kuei-Mei Yang). A dreamer who loves American music and longs to move there, he is slow at his work, even his mother chastising him for this. Devoted to her welfare, he is worried about the danger of the decrepit machines and lack of concern by management for worker safety, especially when she suffers a minor injury. He also reunites with Yuan (Yo-Hsing Fang), now a beautiful young woman who also loves music and dancing. The two dance at a local club and make love, but because she is from a well-to-do family, he is at first reluctant to bring her to the dilapidated apartment he shares with his mother. He is so poor that when he takes her to a fancy restaurant and bluffs the suspicious waiter into serving them, they run for the kitchen exit before the bill can be presented.

The boss at the factory offers Pin-Jui a deal that forces him to choose between his filial duty to his mother and his romantic interest in Yuan Lee, as well as making possible the young man’s dream of moving to America. He arranges for a date between his overly shy daughter Zhenzhen (Kunjue Li) and Pin-Jui. Although the evening consists of more silence than conversation, the two having nothing in common, Pin-Jui soon agrees to a quick marriage. On their way to the airport to leave for America, Pin-Jui looks out the back window of their cab and spies Yuan, whom he has not deigned to tell about his change in plans.

The newly weds settle into a dingy Bronx apartment situated in a slum area. Pin-Jui looks for work while Zhenzhen stays home and cleans the apartment. He is untrained, so he can find work only in a small grocery-deli. Zhenzhen grows so bored with domestic work that she visits the local laundromat several times a week with small loads just so she can be out among people. This pays off when she meets a somewhat older woman from Taiwan who delights in finding a companion with whom she can speak her native language.

Pin-Jui spends virtually every waking hour at the store, so that Zhenzhen spends more and more time with her new friend, eventually accepting her advice to enroll in classes so she can reclaim her abandoned dream of becoming a teacher. Pin-Jui tries to connect with his silent wife by bringing home an electronic keyboard, suggesting that they can learn to play music together. Nothing comes of this, Zhenzhen piling books and such on top of it. They do have a son and a daughter, but Pin-Jui is so busy at the store that he takes little part in raising them.

In the middle-aged segments Pin-Jui is played by character actor Tzi Ma. He now lives alone, Zhenzhen having walked out on him years earlier. He has tried to convince his mother to move from Taiwan to live with him, but she wisely declines, saying she knows no one in America. Grown daughter Angela (Christine Ko) is estranged from him for the same reason that her mother fled the marriage–his work prohibiting any connection. She is depicted as hard working, so she is having difficulties connecting with her lover Eric. A reflection of her father’s behavior? She also has inherited the family’s “don’t let them see you cry” dictum, so she does not know how to share with her father her own feeling of abandonment by the man she loves.

We see just one incident from Angela’s childhood, her piano recital during which she forgets what comes next. After a couple of attempts to continue, she does manage to complete the piece. Rising to take her bow, she holds back her tears. In the audience Pin-Jui shakes his head disapprovingly at his wife. In their car tears streak down the girl’s cheeks, and her father barks, “Don’t cry. Crying never solves anything. Be strong.” Little wonder that years later, when Angela is going through the break-up with her lover Eric, she does not turn to her father for comfort or advice.

Indeed, the distance between them has grown so great that Pin-Jui returns to Taiwan for his mother’s funeral without even informing his daughter that her grandmother has died. When the now remarried Zhenzhen calls him to express condolences, she reveals that Angela is having trouble with Eric, she urges him to talk with Angela. This now confident woman, having achieved her dream of becoming a teacher, is a far cry from the painfully shy girl Pin-Jiu had married in Taiwan!

Pin-Jiu reconnects on FaceBook with his first love and arranges to meet Yuan during her upcoming visit to New York City. Now played by Joan Chen, we almost expect them to renew their romance when they meet at a restaurant. This time Pin-Jui jokingly tells her, they need not run out because he can afford the prices. Alan Yang is too astute of a writer to give in to the usual Hollywood fantasy. Besides, his screenplay is based on some of the experiences of his own immigrant father. (It is even his father’s voice that we hear at the beginning of the film as narrator.)

Alan Yang does not judge Pin-Jui, providing us with scenes that show both his positive and his negative sides. He is a conflicted man, torn by his dream to go to America, his duty to and love for his mother, and his romantic love for Yuan Lee. For him his boss’s daughter is just a pawn,  his ticket to America, their marriage one in name only. Although he might have eventually come to share their time together as the grounds for love, he actually turns away from his wife, spending his all  his time at the store. However, his labor is, in the words of the prophet, “that which is not bread.” And though he has supposedly done everything for his mother, she rejects his pleas to move to America when he has accumulated enough wealth to bring her over. His sacrifice of his true love has been for naught. True, he did but that electronic keyboard, but apparently neither of them made the effort to learn how to play it.

It is not until the Chinese New Years that Angela hosts in her lavish apartment that we see any kind of a breakthrough for the father and daughter. The role of host has passed from father to daughter. The place is filled with friends, but Pin-Jiu sits alone, nursing his drink. It is what follows that offers a hint of hope for an opening up of their relationship. There is no big dramatic scene. The words between them are few, hope expressed mainly by the consummate understated acting of the two actors. Tigertail is an adult film for adult viewers who know that life is complex, full of regretful memories, but which also offers the possibility of healing—if one but makes the effort.

A 3 generation story in which a Taiwanese son gives up his lover so he can come to America so he can care for his mother, works so hard he loses his wife & alienates his daughter.
Editor Rating ★★★★★4.5 out of 5
More Details