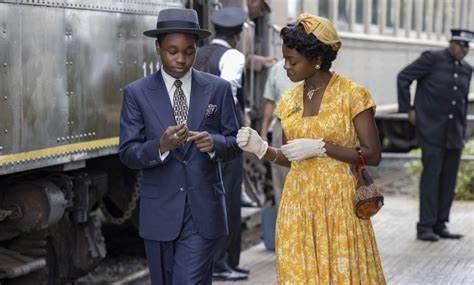 Rouse yourself! Why do you sleep, O Lord?
Awake, do not cast us off forever!
Why do you hide your face?
Why do you forget our affliction and oppression?
For we sink down to the dust;
our bodies cling to the ground.
Rise up, come to our help.
Redeem us for the sake of your steadfast love.

Director Chinonye Chukwu’s film of the life and death of Emmett Till exposes the ugly face of Jim Crow America, a face even more grotesque than the battered one that the world saw when Jet Magazine printed a photo of his disfigured face. The story of Emmett Till and his mother Mamie Till Bradley, though it unfolded 67 years ago, is still urgent because the hate-filled racism that poisoned his murderers is undergoing a resurgence in our nation today.

The film begins in Chicago in 1955 where the Black fourteen-year-old Emmett Till (Jalyn Hall) lives with his mother Mamie Till Bradley (Danielle Deadwyler). His father had died during WW 2, and Mamie had remarried and then divorced, and now she is engaged to Chicagoan Gene Mobley (Sean Patrick Thomas). The boy is getting ready for an August vacation with his uncle Moses Wright (John Douglas Thompson) and other relatives in her home state. We see that he likes to dress well and has a lively personality—just as his former classmates testify in the excellent PBS documentary that ought to accompany the dramatic feature, The Murder of Emmet Till.  Mamie is trying to get him to take seriously the very different—and to a Black person dangerous—racial mores in the Magnolia State. When she says that he must act small down there, the boy hunches up his shoulders and stooping down, walks around the room as he laughs. Several times she tries to instill in him the necessity of being careful. He tells her he knows, but it is obvious he has no inkling of the danger to a Black person raised in the North trying to act the his customary way in Mississippi.

Emmett gets his first taste of the difference when, as the train approaches the Mississippi border, all the Black passengers have to get up and move back to the “colored” car. At his uncle and aunt’s home just outside of Money, Mississippi, he enjoys himself the first few days with his young cousins, though not at all liking to pick cotton. Ominously, shortly before Emmett’s arrival farmer Lamar Smith and minister Rev. George Lee, both civil rights activists, were murdered in separate shootings, with none of the killers being brought to justice.

On August 24, 1955 Emmett went with several other boys to buy candy at Bryant’s Store where Carolyn Bryant (Haley Bennett) waits on him. He admires her beauty, and when she takes offense, shows her the picture of a movie starlet that came with his wallet, to which he had compared her. He leaves the store, and she follows him out, whereupon he turns and whistles at her. The other boys immediately realize the danger and hustle Emmett into the car and drive off, while the angry Mrs. Bryant seeks her husband.

Back at Moses’ shack everyone tells Emmett what a mistake he has made. However, nothing happens during the next few days, until the night of August 28, 1955. Carolyn’s husband, Roy Bryant, and his half-brother, John William Milam, bang on the door of the shack. The boys had gone to bed, and Moses tries to forestall the abduction, pleading that he is just a boy. They brush aside all his pleas and, aided by some African American employees, take off with Emmett bundled in the back of the pickup truck. The filmmakers chose not to show the actual beating, torture and shooting, but they do show a Black man Willie Reed (Darian Rolle ) who sees the men with Emmett and hears his screams.

When news of Emmett’s abduction reaches Mamie in Chicago, her divorced parents, John Carthan (Frankie Faison) and Alma Carthan (Whoopi Goldberg), help her contact a cousin, Rayfield Mooty (Kevin Carroll), employed by the N.A.A.C.P. , telling her that the organization will contact high officials, including the mayor of Chicago and the governor of Illinois, to help find Emmett. Then comes the dreadful news of his body, fastened by barb wire to a heavy cotton gin fan, being found in the Tallahatchie River. Mamie insists that the body be returned to Chicago. As she stares in horror at the disfigured body of her only son, the camera slowly moves up, showing us also how his face had been destroyed by the beating and gunshot, his whole body bloated from being in the river.

Outside the church where the funeral is to be held, Mamie speaks passionately to the press and crowd: “That smell is my son’s body, reeking of racial hatred. Now I want America to bear witness.” She beckons to a Black news photographer (Noel Sampson) to come in and take pictures of her son. She has made the controversial decision to have an open casket funeral, and is in full accord with the pictures being published in JET Magazine. Tens of thousands file by to view the disfigured body. Mamie’s aunt does not want to look at her nephew, no doubt there being guilt over her and husband Moses not being able to protect him, but Mamie tells her she has go to.

The movie moves on to the farce of a trial when the culprits are arrested. Mamie’s reputation is smeared because of her two marriages and pending one. And the defense will be that the body is not that of Emmett, even though the corpse is wearing his father’s ring. Instead, the lawyers charge that the mother and the NAACP have concocted a lie, that the boy is alive and well in Chicago. Thus, Mamie’s decision to journey to Mississippi to testify in person is her second act of courage, following her open-casket decision. Her divorced parents John and Alma Carthanhttps://en.wikipedia.org/wiki/Frankie_Faison (Frankie Faison and Whoopi Goldberg) are against her going because of the danger, but she insists. Fiancé Gene Mobley wants to accompany her, but gives in when she says their being together could be used against her.

She is welcomed by her hosts in Mississippi, headquartered safely in the all Black community of Mound Bayou (a remarkable community I visited while working in that state during Freedom Summer). Among those advising her are Medgar Evers (Tolsin Cole) Myrlie Evers (Jayme Lawson), who themselves will be enveloped in death and grief eight years later.

The trial of course goes nowhere, the whites in town looking at her with contempt and hatred. Jim Crow reigns, with Black reporters segregated to a small area. After its predictable outcome of acquittal, Mamie returns to Chicago where she begins speaking out against racism. She and her backers discover that her grief and rage at the horrible injustice meted out to her son have turned her into an eloquent civil rights activist. She does enjoy a long marriage with Gene Mobley and a distinguished career as an activist. Her advocacy on behalf of her son helped to spark the civil rights movement due to the shocking pictures of her boy’s face, revealing the horrible face of Jim Crow. In the PBS documentary about her we learn that a hundred days after the murder Rosa Parks refused to give up her bus seat, thus launching the Montgomery Bus Boycott and the beginning of the end of segregation laws in the nation. Elsewhere I have read that Ms. Parks has said that she was thinking of Emmett Till at that time of her famous bus ride.

Actress Danielle Deadwyler is a marvel at expressing grief and then rage and determination, frequently going against everyone around her. I suspect she will be among the Oscar contenders for this year. However, I wish the script writers, Chinonye Chukwu, Michael Reilly, and Keith Beauchamp, had given her even more to work with. For some reason they leave out what could have been a powerful scene—that of the opening of the nailed coffin. You see, the Mississippi officials were reluctant to ship Emmett’s mutilated corpse back North because of the bad image it would cast on the state. Thus, when the family insisted, they made the mortician promise he would not unnail the lid. When it arrived, Mamie asked to see her son’s body, and the mortician told her he had signed an agreement not to open the casket. She replied that she had not signed or promised any such thing, and thus asked for a hammer to open it herself. This was the beginning of her acts of courage, culminating in the decisions to keep the casket open for the funeral and to publish the pictures in a magazine so all of the world would share in the horror.

Whoopie Goldberg’s part is small, but she too has her affective scene of great pain and grief over the death of her beloved grandson. I was intrigued to see that civil rights icons Edgar and Myralie Evers are shown giving much needed support to Mamie during her time in Mississippi. It is interesting that the actress in 1996 played Myralie Evers in The Ghosts of Mississippi, a film about the widow’s seeking justice for the murder of her husband.

Film has the power of immediacy in bringing the past alive again. This is important because when we read about such a racial atrocity as the murder of a Black boy way back in 1955, it seems like such a long time ago, but watching it unfold on the screen forces us to confront it more directly. “Black Lives Matter” is not just a slogan, but a vital movement to combat the dark force of racism still infecting a large segment of our population. The murders of African Americans by whites the past few days might not be as garish as that of Emmett, but they are just as lethal. TILL is a movie that matters, one that can inspire us to do whatever we can in the endless struggle to root out all forms of racism that still infect our society.

Just as I finished the above I learned that a statue of the boy martyr has been unveiled—in Greenwood, Mississippi! The 9-foot-tall bronze statue shows him in slacks and tie, his left hand touching his hat, and a smile on his face. Mamie is long gone (2003) but a cousin who was present the night of his abduction was there to represent the family. There is good reason to cheer this, but news of another development (this past August) moderates this considerable. It concerns Carolyn Bryant, the woman whose anger against Emmett Till fueled the murder of the boy. When an unserved warrant against her was found in  Leflore County’ courthouse, it was taken to a grand jury, which then decided not to charge her . So, though the boy’s death had a great effect on the civil rights movement, the last opportunity to bring about justice for the Till family has passed.

The murder of 14-year-old Emmett Till in MS in 1955 sparks outrage leading to the C-R Movement, thanks to his determined mother Mamie.
Editor Rating ★★★★★5 out of 5
More Details