From the very beginning we see that this highly unusual film will be more of a visual meditation than the ordinary story-based film. As it opens we hear a woman’s voice musing, accompanied by a montage of shots,  “Newborn. I open my eyes. I melt. Into the eternal night. A spark. You brought me out of the shadows. You lifted me from the ground. What is she dreaming of? How calm she is. In love. Forever at peace.” The shots show a woman and a man playfully teasing one another on a train, walking the streets of Paris while enjoying some of its monuments, lying together in a park, standing on a bridge over the Seine as a boat passes beneath them, and admiring a medieval tapestry, the camera lingering on the Lady in the tapestry as we hear “In love. Forever in peace.” 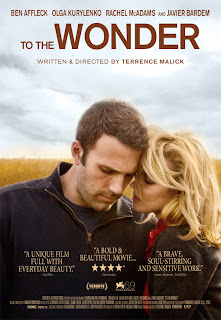 Director/writer Terence Malick’s film is a meditation on two kinds of love and the yearning or thirst that sensitive humans experience—the first love is that between Neil (Ben Affleck), traveling in France, and Marina (Olga Kurylenko), a divorced Ukrainian émigré living in Paris with her 10-year-old daughter Tatiana. This Eros love, as the Greeks called it, is juxtaposed with the agape love of Catholic priest Father Quintana (Javier Bardem). The yearning, on the one hand, is Marina’s longing for the love vouchsafed in marriage, and on the other hand the priest’s thirst for the God whose presence he cannot feel. Through much of the film he suffers the dark night of the soul akin to that which afflicted Mother Teresa.

The lovers travel to Mont St. Michel, the island abbey off the coast of Normandy, basking in the wonder of their newfound romance. As they ascend the stairs Marina comments, “We climbed the steps to the Wonder”—this is followed by their walking through a garden and the vaulted nave of the church—which apparently gives the film its title. Most of the reflections and sparse dialogue involve Marina, with Neil scarcely saying more than three lines throughout the entire movie, and the priest’s prayers and sermons. Neil seems withdrawn, unable to express himself and, worst of all, unable to make the commitment that Marina yearned for while she was gazing at a medieval tapestry in which a maiden is flanked by two unicorns.

Neil does invite her and Tatiana to return with him to Oklahoma, where mother and daughter are happy at first, Neil joining in their frolicking in one tender scene. But we see his reticence in the supermarket scene in which Tatiana runs around marveling at the abundance and cleanliness of the place, and then asking if Neil will marry her mother and become her step dad. He makes no reply. In a later brief revealing shot we see him outside their house looking in as mother and daughter dance merrily together.

Neil works as an environmental inspector for an oil company. When a number of people tell him about a pollution problem, he seems very concerned for their welfare. While wading in a stream he speaks on the phone about the lab tests confirming the pollution caused by the oil extraction, but I am not sure what he does about it, because then the scene shifts to Marina reflecting on love. For a while Marina lives off the loving relationship that was so enriched by their experience together in France, but Oklahoma is so bleak by comparison, and Neil is gone so often. Even when he is present, he is so remote.

Tatiana, unable to forge friendships at school due to her poor English, is the first to express dissatisfaction. “Something is missing,” she tells her mother. When her visa is expired, and Neil has made no marriage proposal, Marina returns to Paris where she hopes to reconnect with her former husband for the sake of Tatania. She longingly reflects that had Neil said the word, she would have stayed.

Neil discovers an old flame, Jane (Rachel McAdams), a lonely widow who cannot manage alone the bison ranch she has inherited. But will this relationship hold up, given Neil’s withdrawnness and inability to make a commitment?

Neil’s inability to commit is underlined in a brilliant earlier scene in which he and Marina are attending mass at Father Quintana’s church, and during the homely the priest declares, “ Man is in revolt against God. The prophet Hosea saw in the breakdown of his marriage the spiritual infidelity of his own people. In that broken marriage we see the pattern of our world. We wish to live inside the safety of the laws. We fear to choose. Jesus insists on choice. The one thing he condemns utterly is avoiding the choice. To choose is to commit yourself. And to commit yourself is to run the risk, is to run the risk of failure, the risk of sin, the risk of betrayal. But Jesus can deal with all of those. Forgiveness he never denies us. The man who makes a mistake can repent. But the man who hesitates, who does nothing, who buries his talent in the earth, with him he can do nothing.” When the camera switches from the priest to Neil he appears uneasy.

The priest himself is wracked with the yearning for God, similar to that of the writer of Psalm 42. Fr. Quintana moves among his people preaching and living a faith that he himself no longer feels. Many of his parishioners are poor, and he faithfully visits them, or tries to, as some will not respond to his knocking at their doors. At a wedding which he presides over he is the unsmiling one amidst the festivities. An elderly woman says that she is praying for him to receive the gift of joy. He replies, “Me?” and she says that it is because he looks so unhappy. This is reinforced when in the nave of the church the bearded church sexton says virtually the same thing to him. As each of them places a hand on a pane of the stain glass window the old man, so filled with God that he speaks in tongues, talks of the warm spiritual light.

Much more occurs in the last half of the film, again Malick giving us just fragments of plot and dialogue, so that I felt like I was working on one of those children’s connect the dots pictures that sometimes surprised me when the full picture emerged. No filmmaker that I know and admire makes me work as much as does this enigmatic film artist. The result, however, is worth all the effort, especially the nearly last scene in which Fr. Quintana recites part of the beautiful hymn known as St. Patrick’s Breast-Plate, set to some moving visuals.

It is sad that the film could find no one willing to distribute it to theaters, but given the poor box office response of his magnificent 2011 film Tree of Life, this is understandable. Again, I thank God for DVD and streaming video for making this masterpiece available to us. The critical response has ranged from calling it “muddled” and “boring” to that of “masterful.” It might not be for you, but I urge you to sum up your patience and give it a try. But do this with several spiritually astute companions who like to discuss films: this is a film that will prove the mantra I teach at my film workshops on the need for group involvement with a film, “All of us see more than one of us.”

The full review with a set of 12 questions for reflection or discussion appears in the Sep/Oct issue of Visual Parables, which will be available on Sep. 23 when VP’s new site is launched..

2 Replies to “To the Wonder”