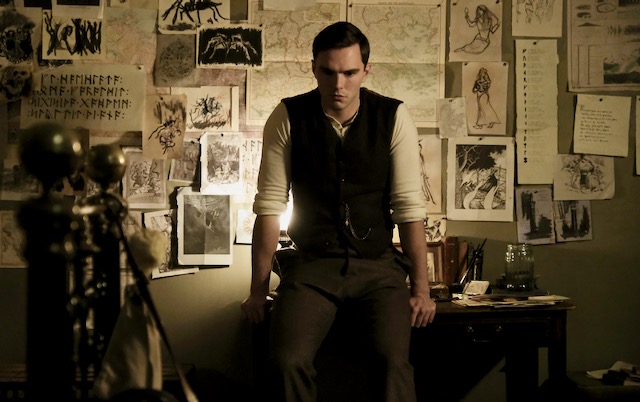 The Nephilim were on the earth in those days―and also afterward―when the sons of God went in to the daughters of humans, who bore children to them. These were the heroes that were of old, warriors of renown.

Finnish director Dome Karukoski  joins with screenwriters David Gleeson and Stephen Beresford to bring to us the background story of the author of the Fellowship of the Ring series, beloved by millions of readers throughout the world. Although not as satisfying as I had hoped, the film is still a “must-see” for those who love Frodo and his faithful companion Samwise Gamgee and all of the rest of their faithful companions.

The story moves back and forth from John Ronald Reul Tolkien’s horriffic experience in the trenches of the Somme during World War I to his past youth and future teaching career at Oxford. With his father dead, his imaginative mother Mabel (Laura Donnelly) raises him and his brother in genteel poverty in a country cottage made to look like it belongs in The Shire. Her use of a rotating magic lantern to project swirling creature images on the walls while telling the boys fantasy stories suggest what a great influence she must have been, even though she died at the age of 36. The boys then come under the guardianship of the stern Father Francis Morgan (Colm W. Meaney). With a scholarship John Ronald (Nicholas Hoult) is able to attend the elite King Edward’s School where three bullies pick on him. However, after he proves himself to be a gifted scholar, they become cherished friends.

The three would-be writers and artist– Robert Gilson (Patrick Gibson), Geoffrey Smith (Anthony Boyle), and Christopher Wiseman (Tom Glynn-Carney)–form with John Ronald a four musketeer-like brotherhood dedicated to “change the world through the power of art.” Theirs is a made-up motto “Helheimr,” somewhat like that of the American students’ in Dead Poet’s Society “carpe diem.” Tolkien also soon discovers the power of love when at the boarding house where they both reside he meets the talented and vivacious Edith Bratt (Lily Collins).Though three years older than he, she returns his love, and they enjoy dining at a picturesque local inn where, from its second floor, they gleefully drop sugar cubes into the hats of ladies passing by. They also have a whimsical (and very romantic)time when, unable to gain entrance to the performance of a Wagner opera (it is pointedly the myth-based Ring cycle), Tolkien leads Edith to a back storage hallway where the two don costume cloaks and mime the singing that they can hear through a partially opened door. (The long, narrow corridor then morphs into the muddy trench filled with soldiers.)

When the lad’s grades suffer, Fr. Morgan insists that it is because of his romance, and so orders his charge to break off contact with Edith. Tolkien objects, but threatened with the withdrawal of finances which would have ended his studies, he agrees. He is too much of a seeker after academic knowledge to do otherwise. During this sad period he meets the famous linguist Prof. Joseph Wright and after some difficulty convinces him to allow him to enroll in his course, the skeptical teacher agreeing only after the supplicant shows him his notebook filled with drawings and his invented language. While convincing the professor, in the background there is the unlikely scene of the students announcing that England is now at war, the naive lads actually welcoming the news.

Before going off to war Tolkien re-unites with and convinces Edith to marry him. Only snatches of his service in combat is shown, the film mostly concentrating on his anxious search for his friend Geoffrey, Tolkien constantly urging his batman to go search for him. The aide (also named Sam, played by Craig Roberts) is so solicitous of Tolkiens’s own health that we are led to assume he is the source of Samwise Gamgee. Many other unsubtle hints of influence are shown on the battlefield, such as a German attack with flamethrowers, the bright flames turning into a fire-breathing dragon. Explosions take the shape of the Balrog. During a charge onto the field of battle with Tolkien in his fever tagging along, we see a distant conflagration and merging from it the form of Sauron. Of course, these are obviously inspired by Peter Jackson’s films.

For those of us hoping to see more of Tolkien’s life as a teacher and his friendship with C.S. Lewis (he was a big influence on his friend and Oxford colleague’s conversion from atheism to Christianity), the film ends too abruptly with his hospitalization for his illness and a few brief scenes of his life as a professor, followed by a number of screen cards informing us of his success with his Middle-earth series. His Christian faith is down played―I don’t recall any discussion of theology, though due to my hearing impairment I might not have heard the word “God,” if he did speak of the deity. Thus this is very much a secularized Tolkien for the general public.

The film has been panned by several critics, but nonetheless is worth seeing. I’ve included the brief mythological note from Genesis to show that beneath the Jewish and Christian faiths there is a deep layer of forgotten mythology. It was myth, especially Nordic, plus his love of languages and words, that attracted and inspired Tolkien to create his own mythic world, a world that millions of us have thrilled to enter and experience to its fullest. We get hints of the sources of this creativity in Dome Karukoski’s film, but there is still room for a filmmaker ho is more creative to plumb the depths of this great writer. I spent some time probing the several books I have by and about mythologist Joseph Campbell, but could find no mention that he had met or written about the equally great British myth maker. Wouldn’t it be interesting if the two had met, or, recognizing that as impossible, that an imaginative Campbell student might create a film about Tolkien? Until then, this film will have to suffice.

Note: I just received a promotional email from Vision Video concerning their 88-minute DVD THE FANTASY MAKERS: Tolkien, C.S. Lewis and MacDonald. This film is available also in download and streaming format. I have not seen it, but hope to in the near future. If any of you readers have seen this, please get in touch with me.

The story of the young Tolkien, of how his mother, fellowship with 3 friends, love for Edith, his experience in WW 1 shaped him into the famous fantasy author of Lord of the Rings.
Editor Rating ★★★★★4 out of 5
More Details