and stealing and adultery break out;

Therefore the land mourns, and all who live in it languish…

When he opened the fourth seal, I heard the voice of the fourth living creature call out, ‘Come!’ I looked and there was a pale green horse! Its rider’s name was Death, and Hades followed with him; they were given authority over a fourth of the earth, to kill with sword, famine, and pestilence, and by the wild animals of the earth. 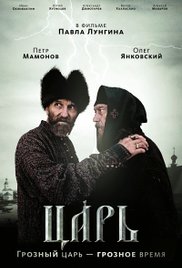 Pavel Lungin’s film dealing with the middle portion of the reign of Ivan the Terrible does nothing to dispel the lurid reputation that historians have assigned to the first “Tsar of All Russia.” Ivan Vasilyevich Grozny, known as Ivan the Terrible or Ivan IV, is portrayed by actor Pyotr Mamonov as a half-mad but crafty tyrant believing that all power in the land must reside in his bloody hands. A religious fanatic, he is convinced that the Last Judgment is at hand. Thus we see him at times reading from the Book of Revelation. There is indeed almost apocalyptic violence besetting the people—some of it due to the war being waged against him by European powers (hard to believe now that Poland was once more powerful than Russia!), and his fear and hatred of his enemies, real and merely perceived. Much of the violence is due to his murderous policy called Oprichnina, carried out by a band of vicious horsemen known as The Tsar’s Dogs who dress in black, each carrying the severed head of dog attached to his saddle.

In his consolidation of power the Tsar has been waging war on the boyars, the warring Russian nobles who have resisted giving up the rule of their feudal territories. Even those loyal to the Tsar often find themselves targeted for death if Ivan thinks they are a threat, or as in the case of a group accused of surrendering to the enemy, suspected of betrayal.

The danger is so great that the current Metropolitan archbishop of Moscow resigns and withdraws from public life, apparently out of fear that he too will fall victim to the terror. Needing spiritual support, the Tsar seeks a successor. Abbot Filip (Oleg Yankovskiy) has run the monastery on the Solovetsky Islands so well that it prospered from the windmills, buildings and canals that he had built. Hearing of this, Ivan appoints Filip as the new Metropolitan. Filip refuses at first—on his way to Moscow Filip had met his nephew who advised him of the danger to anyone who became closely involved with the Tsar. However, he is persuaded to accept.

Although their relationship at first is good, it is not long before the two clash. Filip cannot keep silent as he sees Ivan’s cruel treatment of people, especially when a group of falsely accused boyars are sent one by one into an arena where a vicious bear attacks and kills them. Ivan, his Tsarina, and his court enjoy the bloody spectacle, until a little girl, to whom he had given an icon of the Virgin Mary, runs into the arena believing that with the holy icon she can stop the killing. With one sweep of its huge paw the beast kills her.

The breaking point comes with Filip first refusing to sign a death warrant condemning the boyars wrongfully accused of betrayal, and later denouncing the killing and refusing to give the Tsar his blessing. He is imprisoned, and then… even the monks who care for Filip’s body meet a sad fate. (Because of a healing miracle benefiting his jailer, Filip has been made a saint, one still venerated today in the Russian Orthodox Church.)

In this film Ivan is obviously mentally unstable, but a minor character who seems even more so is his quick-tongued Court Fool Vassian. He delights even more than his master in watching the suffering of those who oppose the tsar. During the hard to watch executions of the boyars at the jaws of the savage bear Vassian is actually gleeful. However, later his tongue lands him in trouble, and yet, even as he meets his terrible fate, he laughs maniacally.

Ivan lived on for a good many more years, dying while playing a game of chess, so the filmmaker does not present him as getting his just desserts. However, he does end the film on a dark note that is not at all favorable to the bloody tyrant, one that perhaps might hint at a quotation that Martin Luther King, Jr. used, “The arc of the moral universe is long, but it bends towards justice.”

The clash between a civil and a religious leader will remind you perhaps of the great film based on Robert Bolt’s play, A Man For All Seasons. Set in England about 60 years earlier in the same century, this is the story of Catholic Sir Thomas More refusing to bow to King Henry’s will to place himself as head of the new Church of England so he can set aside his wife, who has not borne an heir to the throne, and take another wife. Of course, the details are different, Ivan not hindered by a Parliament or a Magna Charta that place some limits to his power. The Russian tyrant is far less restrained in his blood lust. Henry may kill some of his wives, scores of nobles and several thousand rebels and “heretics,” but for Ivan the Terrible, it was tens of thousands. To find his equal we must wait for Joseph Stalin to come to power.

Both the Russian and the English stories show the deadly results when state and church are too closely connected. Jesus’ ethics, especially love for neighbor, quickly go out the window, the absolute monarch regarding the church only as a power center. Most church leaders bend to the will of their ruler, but not in the case of Thomas or Filip.

If you appreciate this film, you might want to watch the 2014 Russian film Leviathan in which the mayor of a small Russian coastal city covets a citizen’s house because the property affords a gorgeous view of the beach and sea. The mayor co-opts the priest of his local Orthodox church into lending moral support to his desire for the land. T he Mayor’s scheme leads to the unjust conviction of the owner in court. The man is imprisoned, and the official gains the property for “civic use,” meaning his residence. The sphere of the power struggle is smaller than Ivan’s, but the principle of the church being used to bolster the power of the man at the top of the heap is the same. We need such films as these to remind us of the danger of the church abandoning its prophetic role and going along with the evil powers that be. There is a cost to this, as the case of Metropolitan Filip shows so well. Note: Available on DVD, you can watch the film for free on YouTube at https://www.youtube.com/watch?v=aCvK57uhQxM

The conflict between Russia's Ivan the Terrible & his Metropolitan Filip is similar to that between England's King Henry VIII & Thomas More, but more bloody.