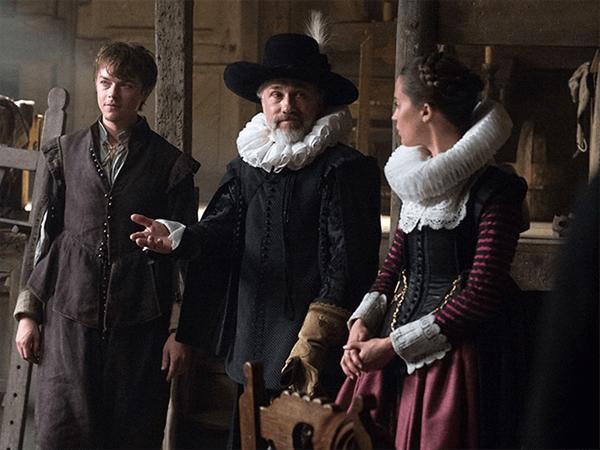 You shall not commit adultery.

Director Justin Chadwick’s film, based on Deborah Moggach’s best-selling 1999 novel of the same name, is set in 17th century Amsterdam during the economic bubble known as Tulip Mania, or Tulip Fever. Though ready for release in 2017, the film showed at only a few theaters, and its DVD release was just this year. Now that I have seen it, I can understand why. Its backers must have known that audiences would have problems accepting parts of the plot, despite the superb Academy Award cast and the lush cinemaphotography.

Also, people of faith will have trouble sympathizing with the heroine Sophia (Alicia Vikander), plucked out of a Catholic orphanage by wealthy merchant Cornelis Sandvoort (Waltz) so she can produce an heir. For three years she dutifully submits to penetrations by what the old man calls “my little soldier,” but the almost 40 years difference in their ages prevents her from feeling any passion. Nor is she able to get pregnant. However, when her husband brings in young painter Jan van Loos (DeHaan) to produce for posterity a family portrait, her passion is ignited, the two eagerly falling into the artist’s bed.

The story is narrated by Sophia’s servant Maria (Holliday Grainger), who has her own lover, fishmonger Willem  (Jack O’Connell). Both Willem and the penniless Jan see their way to financial independence is through joining in the wild speculation on tulip bulbs. The best part of the film are the scenes in the back room of a tavern where the wealthy and the poor mix to compete in the auction of tulip bulbs. Although the bulbs are eventually planted by those who love their beauty (or in many cases the prestige that comes with owning such expensive flowers), it is the lust to make money on the bulbs that fuels the frenzied bidding. I suppose we are to regard this economic lust as the twin to that of Sophia and Jan’s.

The last half of the film is a silly plot hatched by Sophia to convince her husband that she is pregnant, even though it is Maria who has conceived. Willem is conveniently removed for the nine months by being kidnapped for sea duty. There is one of the silliest birth scenes ever filmed, and then a conclusion that seems contrived because the writers felt compelled to have Sophia pay for immoral betrayal of her husband.

You might want to see the film for its rich portrayal of Amsterdam street life and the craze over tulips, or maybe even because you want to see every film, graced by Judi Dench. She plays a no-nonsense abbess whose garden full of tulips involve her in the tulip market. However, she does not appear often enough to save the film. (Since writing this review I have read the novel and was surprised that there is no Abbess in the film, and the convent is mentioned just once at the very end of the novel—and it does not have a tulip garden. It would be interesting to know if adapter Tom Stoppard or his co-scriptwriter Deborah Moggach suggested adding the character so as to make the plot a bit more complex.)

Sophia’s eventual fate is sketchily depicted both in the film and novel. It might satisfy those concerned about her immorality. Writers of romantic novels and screenplays often excuse adultery by painting the betrayed spouse in an unsympathetic light, making his alleged cruelty, boorishness, neglect, or abuse more the victim than betrayer. To the novel’s credit, old Cornelius is not this kind of a husband, just a loquacious older man seeking a male heir to inherit his wealth.

Watch this film if you are curious about the first economic bubble to afflict the capitalist world—and feel you need more than what the dry facts of the era than Wikipedia can provide.

During 17th century Holland's tulip mania a young wife falls in love with the man painting her protrait & betrays her older husband with an elaborate plan.
Editor Rating ★★★★★3.5 out of 5
More Details