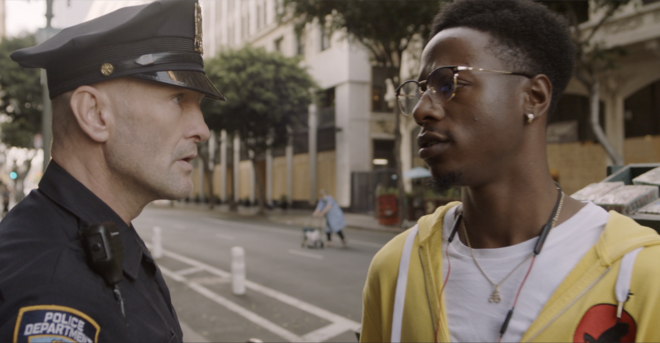 Consider how many are my foes,
and with what violent hatred they hate me.

Sort of a “George Floyd Meets Groundhog,” Trayvon  Free and Martin Desmond Roe’s Oscar-nominated short film is about a man caught in a time loop.  There are numerous variations in the details of the incidents of his street encounter with a white racist cop, but the victim, a Black cartoonist named Carter (the rapper Joey Bada$$), always winds up dead, shot by a belligerent cop named Merk (Andrew Howard). There is no escaping this film’s connection with George Floyd and the BLM Movement!

Carter, awakening in the bed of the woman he had met the night before, Perri (Zaria Simone), declines her offer to share breakfast because he has to go home before work to feed his dog. Bantering with her over the number of future trysts, he leaves her apartment. However, we see that he is able to talk to and even remotely to feed his pooch through a Furbo dog camera.

Downstairs Carter holds the door for a businessman to enter the lobby, and then he steps out onto the sidewalk. As he takes out his cigarettes, a wad of cash falls out of his pocket. He accidentally bumps shoulders with a passer-by, causing the man’s coffee to splash onto his shirt. The man is upset but keeps moving on. Carter apologizes and offers to pay for the shirt. Officer Merk is attracted by their voices and asks what is wrong. Carter tries to placate, but the belligerent cop is suspicious about the smell of the cigarette and very concerned as to how he obtained such a large wad of money.

He grabs Carter and the two struggle. The fruit vendor takes out her camera to record the event. Two other cops rush up to lend Merk a hand as they seize hold of Carter. In extreme close-ups the camera switches back and forth between Merk’s and Carter’s faces. The cop has the Black man in a choke hold, so that the victim says over and over  “I can’t breathe,” reminding us of another Black man, Eric Garner, unarmed and killed in 2014 by another NYPD officer. Rage and hatred are revealed by the cop’s sneer and clinched teeth. By the time he lets up, Carter is dead.

Cut to Carter waking up again in Perri’s bed. A repeat of their previous conversation and outside Carter sees the same passers-by. Nut this time he avoids bumping the man with the coffee, so their exchange is more pleasant. But not officer Merk, who this time is upset by the smell of Carter’s cigarette. They grapple again, and the cop shoots his victim.

The scenario is repeated and repeated, with variations of details, but always in the end, Carter dies. He even is able to convince the cop about his repeating the incident, but the outcome always is fatal. We think there might be a breakthrough when Merk agrees to transport Carter to his apartment. They talk calmly and experience a slight breakthrough as Carter explains things to the white cop from his Black perspective. Merk pulls up in the alley beside Carter’s home, and…

Back again at Perri’s, who by now has been let in on her lover’s recurring dreams (recurring “a hundred times,” he asserts), Carter says he is going to figure out something. He walks down the stairs, declaring, “Cause it doesn’t matter how long it takes, or how many times it takes, one way or another, I’m getting home to my f— dog.”

As he exits we see on the screen a list of names, only a few of which we recognize, unless we have been writing down the names of Black males killed by the police during the past few days. The first, “Earl Garner,” probably will be recognizable, especially as we are told “Had just broken up a fight.” The next few you probably will not, and then, every five or six names is followed by a note giving the circumstances of the shooting. The scrolling list seems to go on and on, but it ends with “A few of the names.” And then, “Say the names,” and lastly, “Remember the names.”

Better than any lecture or sermon on BLM, this time loop story describing the condition of our racism-embedded society is very appropriate. But at least it ends on a faint note of hope, albeit  a clutching at straws hope. The psalmist who asked God, “Consider how many are my foes, and with what violent hatred they hate me” believed that God would be the source of his rescue. Carter shows no hint of such a faith, but nonetheless he has not given up, by still, even after a hundred experiences of racist violence, keeps trying.

As Carter leaves his girlfriend's apartment his violent encounter with a racist cop is repeated over & over.
Editor Rating ★★★★★5 out of 5
More Details