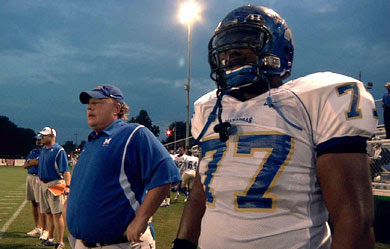 Coach Bill Courtney and O.C. Brown
(c) 2011 The Weinstein Company
Better is the end of a thing than its beginning;
the patient in spirit are better than the proud in spirit.
Ecclessiastes 7:8

Few documentaries have touched me and drawn me in as deeply as Dan Lindsay and T.J. Martin’s film about the 2009 season of the urban high school football team The Manassas Tigers. And I am not a football fan. The film begins with shots of boarded up and crumbling houses with weed-choked yards. This is North Memphis where the closing of the Firestone tire plant in the 1980s brought blight and devastation to the area. Thus Manassas High School had fallen onto hard times.  Forced to cut back in all areas, the budget cuts have hit the football program especially hard. The team plays with poor equipment and practices on a field that is barely better than one of the vacant lots in the area. Worst of all, in order to have any money for the program, the high school has been accepting payments ($3000 a game) to come and be the “Visitors” at Homecoming games at well off high schools, thus insuring the latter a sure-fire victory. It has been years since the Tigers have won a game.

Once a football coach and then a successful co-owner of a lumber yard, for reasons not specified, Coach Courtney left his lumber yard position and has been coach since 2004.  Despite his efforts, the team has never won a game. Now at the beginning of a new season he has hopes for a better year with three better than usual players. O.C. is big and fast on his feet, able to break through an opposing line.  Chavis, back from serving over a year in a juvenile detention center, has a temper problem, but also great skill. So does the undersize “Money,” the only one of the three who earns such good grades that he is looking to attend college, if he can secure a scholarship.

Coach Courtney is blunt with his boys, often lapsing into swearing when a student does something stupid―such as Chavis getting into fights with fellow teammates. But that he cares for the boys we see time after time, as when Chavis is suspended for his fighting and Coach goes to the sullen boy’s home to talk him into not quitting the team.

There are shown just just enough of the game plays to see how the players are improving, and especially in regard to their learning to play as a team. Many ups and downs are filmed, such as Money’s injury that sidelines him for several weeks. The camera follows him into the doctor’s consultation room where the boy is crushed by the news that he cannot play. And then, when he turns 18, and there is one more game to play, he must make the decision whether he feels strong enough to risk the barely healed ankle. There is a powerfully moment when Coach and his volunteer assistant bring news that one of their friends is willing to pay for all of Money’s college expenses. As Coach and boy hug it is impossible to say which of them has more tears running down their cheeks.

Some will resent that Coach Courtney and his volunteer are all white, and the players are all black,  but it would be sad if this prevents anyone from appreciating this true life story. If ever there is a man who deserves to be honored, it is Bill Courtney, a man who saw a need in his community (his lumber yard is about a mile from the school), and stepped in to meet it. To stay with the team through almost five years of defeats, and then to go to such great lengths to keep the discouraged players from dropping out, must have taken an enormous amount of energy and perseverance not to quit himself. He is an example of what he means when he observes early in the film, “Football does not build character. Football reveals character.”  Bill Courtney is also a man of faith, as we see when he leads the team in a pre-game prayer―and a mature faith at that. There is no hint that God is on their side, just a plea that all play their best and that no one on either side be injured.

The ending is bittersweet, both for the team, and the decision that Coach Courtney makes, but in a way it makes this a better film. I don’t know how good the other Oscar-nominated documentaries are, but this is the one I am rooting for. Do not miss this film!