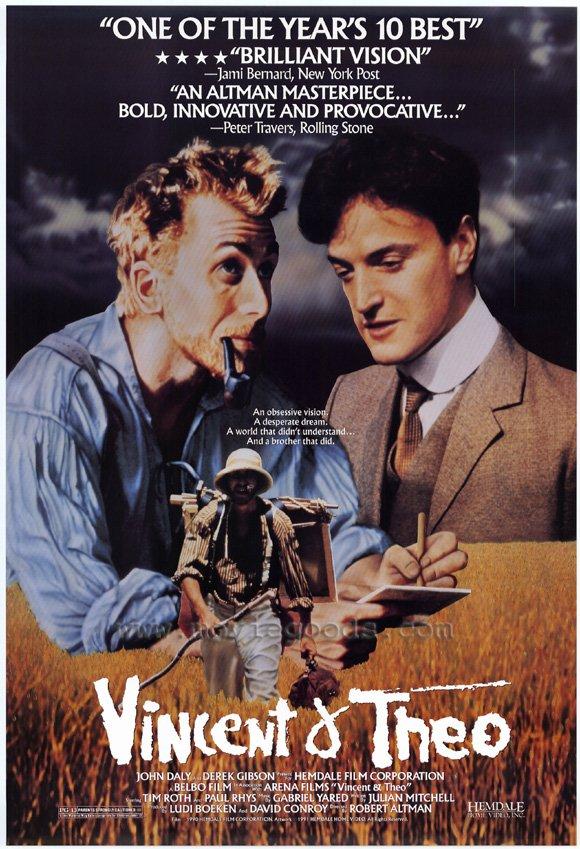 With the advent of Julian Schnabel’s marvelous van Gogh film At Eternity’s Gate, I thought this review from way back in VP’s history might be of interest. Directed by the masterful Robert Altman, it also is great viewing. 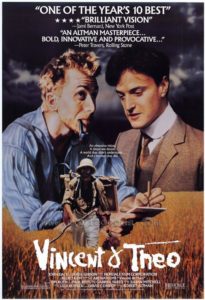 Robert Altman, one of the most creative film directors of our time (Nashville, A Wedding, Streamers), has given us a fascinating study of the relationship between the two Van Gogh brothers. Like the 1943 film about Paul Gaugin The Moon and Sixpence, this one begins with the enormous irony of a painting being auctioned at Christie’s for over fifty million dollars. It is a painting we will see often in the possession of Vincent, a painter who sold just one painting in his short lifetime, but whose works now start in the millions whenever offered at the great art auction centers of the world.

Altman has stated that he did not want to make just another picture about “a great artist.” He must have had in mind the 1956 Lust for Life, which starred Kirk Douglas as Vincent. Altman’s film is a far darker version, and as the title indicates, Theo emerges from the periphery of the story to share center stage with Vincent. For, although it is Vincent who possesses the artistic talent and drive, he could have accomplished little without his brother’s financial and
moral support.  Theo serves as confessor, financial adviser and whipping boy for Vincent. Unlike the earlier film, Vincent & Theo shows the darker side of the brothers’ relationship, Vincent sometimes chiding his brother for not being able to sell his paintings: “If you can sell Corot, you can damn well sell me!” It is apparent from this version that even if Vincent had been successful, he would have been a difficult person to live around.

The little-known cast is totally convincing, Tim Roth capturing the anguish and the anger of an artist obsessed with a vision that the world cannot appreciate. His Vincent sees “God in everything, excepting the church and the bloody family.” Paul Rhys is the thin brother torn between his own career and marriage and his brother’s needs and demands. Wladimir Yordanoff is a more dapper looking Gauguin than was Anthony Quinn’S bohemian portrayal (and for which Quinn won an Oscar).

The film is both a fascinating study of the relationship between the brothers and associates and also of the struggle of the individual against a system, in this case a system driven by commercial values. Vincent painted as no one else had done, even though no one would buy his work. His great “Starry Night” compares to a traditional painting of the night sky as Berlioz’s “Symphony Fantastique” to an 18th Century sonata. Vincent the rebel is driven mad and eventually kill himself, but his vision is finally recognized as that of a genius –and the commercial interests move in.

The film was distributed to art house theaters, so it garnered a limited audience. I have just learned that it is an edited version of a TV miniseries that was 3 hours and 23 minutes long, so I hope soon to see the original to discover what had to be cut for the theatrical version. According to IMDB it is available on Freevie.

Vincent & Theo focuses upon the relationship between the painter and his art-dealing brother who supported him.
Editor Rating ★★★★★5 out of 5